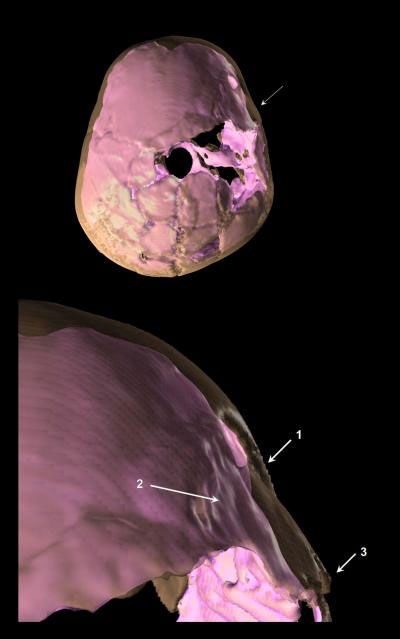 A Paleolithic child that lived ~100 thousand years ago found at Qafzeh in lower Galilee, Israel, was originally thought to have a skull lesion that resulted from a trauma that healed. The child died at about 12-13 years old, but the circumstances surround the child’s death remain mysterious. To better understand the injury, the authors of this study aimed to re-appraise the child’s impact wound using 3D imaging, which allows scientists to better to explore inner bone lesions, to evaluate their impact on soft tissues, and to estimate brain size to reconstruct the events surrounding the skull trauma.

3D reconstruction reveals that the child’s skull fracture appears to be compound, with a broken piece depressed in the skull, surrounded by linear fractures. The authors suggest that this fracture type generally results from a blunt force trauma, often a result of interpersonal violence, but can also occur accidentally. The depressed fracture was likely caused a moderate traumatic brain injury, possibly resulting in personality changes, trouble controlling movements, and difficulty in social communication.

The authors conclude that, the child represents the oldest documented human case of severe skull trauma available from south-western Asia. Furthermore, the child appears to have received special social attention after death, as the body positioning seems intentional with two deer antlers lying on the upper part of the adolescent’s chest, likely suggesting a deliberate ceremonial burial.

Hélène Coqueugniot added, “Digital imaging and 3D reconstruction evidenced the oldest traumatic brain injury in a Paleolithic child. Post-traumatic neuropsychological disorders could have impaired social life of this individual who was buried, when teenager, with a special ritual raising the question of compassion in Prehistory.”