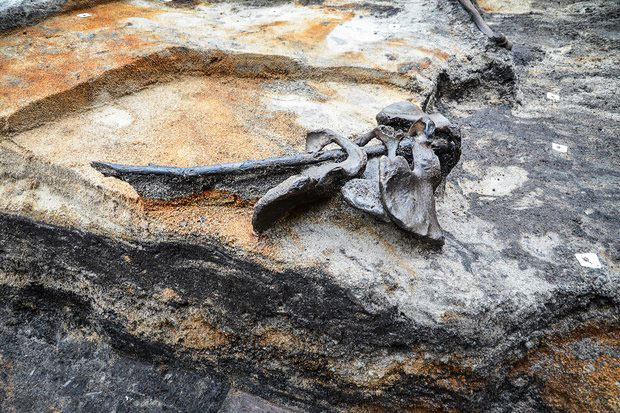 Violent aftermath for the warriors at Alken Enge

A violent aftermath for the warriors at Alken Enge was testified by the finding of four pelvic bones on a stick and bundles of desecrated bones. Ritual violence was perpetrated on the corpses of the many warriors who fell in a major battle close to the Danish town of Skanderborg around the time Christ was born.

Denmark attracted international attention in 2012 when archaeological excavations revealed the bones of an entire army, whose warriors had been thrown into the bogs near the Alken Enge wetlands in East Jutland after losing a major engagement in the era around the birth of Christ. Work has continued in the area since then and archaeologists and experts from Aarhus University, Skanderborg Museum and Moesgaard Museum have now made sensational new findings.

“We have found a wooden stick bearing the pelvic bones of four different men. In addition, we have unearthed bundles of bones, bones bearing marks of cutting and scraping, and crushed skulls. Our studies reveal that a violent sequel took place after the fallen warriors had lain on the battlefield for around six months,” relates Project Manager Mads Kähler Holst from Aarhus University.

The remains of the fallen were gathered together and all the flesh was cleaned from the bones, which were then sorted and brutally desecrated before being cast into the lake. The warriors’ bones are mixed with the remains of slaughtered animals and clay pots that probably contained food sacrifices.

“We are fairly sure that this was a religious act. It seems that this was a holy site for a pagan religion – a sacred grove – where the victorious conclusion of major battles was marked by the ritual presentation and destruction of the bones of the vanquished warriors,” adds Mads Kähler Holst.

Remains of corpses thrown in the lake

Geological studies have revealed that back in the Iron Age, the finds were thrown into the water from the end of a tongue of land that stretched out into Mossø lake, which was much larger back then than it is today.

“Most of the bones we find here are spread out over the lake bed seemingly at random, but the new finds have suddenly given us a clear impression of what actually happened. This applies in particular to the four pelvic bones. They must have been threaded onto the stick after the flesh was cleaned from the skeletons,” explains Field Director Ejvind Hertz from Skanderborg Museum.

Archaeologists assume that the recent finds at the Alken dig stem from an internal conflict of this kind. Records kept by the Romans describe the macabre rituals practised by the Germanic peoples on the bodies of their vanquished enemies, but this is the first time that traces of an ancient holy site have been unearthed.