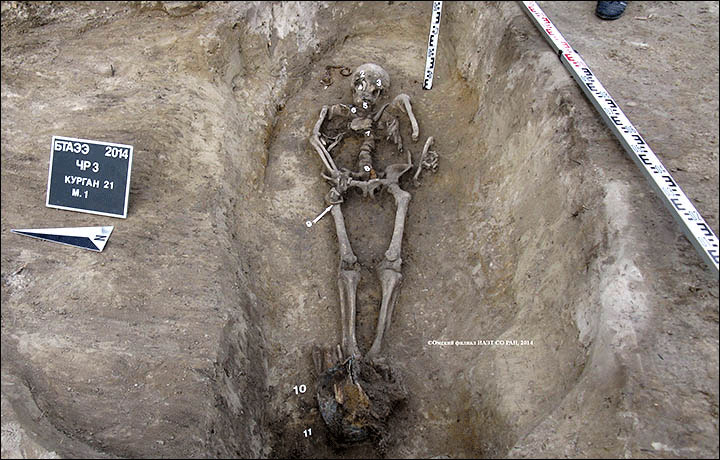 Bogatyr, the life and death of a great warrior

He was 1,80 m. tall, he led a warlike lifestyle in Siberia and he died in battle

Bogatyr, the life and death of a great warrior. This is how one could describe the current riddle archaeologists in Russia are trying to solve, following the discovery of an elaborate male burial in southwest Siberia.

The burial was found in an ancient mound near Omsk, Muromtsevsky district, by a Russian Academy of Science team (Institute of Archeology and Ethnography of the Siberian Branch) led by archaeologist Mikhail Korusenko. The burial belonged to Ust-Ishim culture, the historical ancestors of modern Khanty and Mansi people, and dates around the 11th-12th c. AD. Still, there are a lot of firsts considering this burial, starting with the deceased itself.

The man’s skeleton was found intact lying in the middle of the burial place. His lower arm and hand, however, had been evidently severed, and were placed next to him, indicating his mutilation. His height reached 1,80 m., meaning that he probably towered his peers by 25 cm during his life! Beingd fiersome in life, he probably enjoyed the best funerary care possible. He was found accompanied by 25 war arrows, bronze tools and a bronze cauldron which had been probably placed full of food, to nourish him in the afterlife. A decorated mirror, a bronze plate found on his chest placed insode a protective birch bark cover, was probably a means to communicate with the Gods.

His face was once covered by a funerary mask, traces of which survived. This mask was originally comprising fabric included caskets made of birch bark covering the eye sockets and mouth. Inside the caskets were metal figurines of fish with their heads broken off. Finally, a massive fang of bear was embedded in his nose, indicating how fearless and brave he was.

Archaeologists named the man “Bogatyr” which means “Great Warrior”. His physical appearance, the way he spent his life, the way he died and the way he was honored by his fellow tribespeople all indicate he was brave and respected.

“Our warrior was killed in the battle. His left arm was severed in battle and placed near the body, and his shoulder was broken. But he was buried according to ritual which means he was a respected person. All the elements of the ritual give us an opportunity to discover historical and political conditions of the epoch the warrior lived in”, says Korusenko.”It is a truly unique find which would allow us to fill pages about not only the cultural, but the military history of this part of the region, as we know very little about this particular period of time.”, he adds.