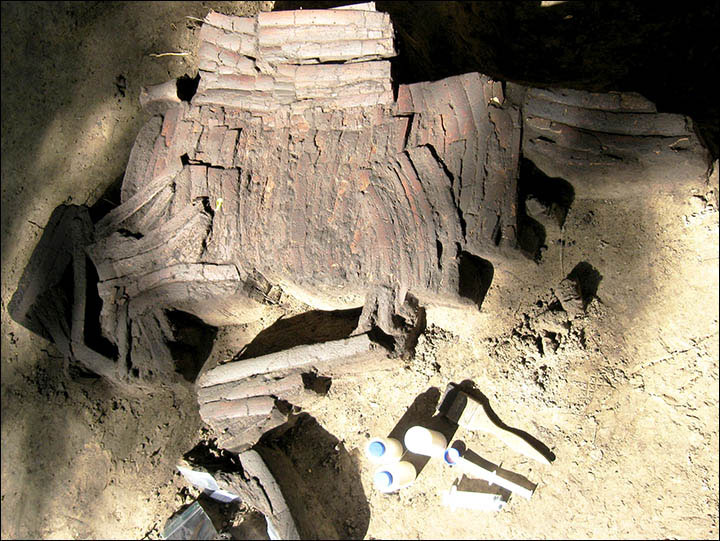 Possibly belonging to an elite warrior

The newly discovered well-preserved bone armor near the Irtysh River, Western Siberia has intrigued archaeologists. Dating from 3,900 to 3,500 years ago it seems to have belonged to an elite warrior or a hero and in its time it certainly was ‘more precious than life’, as experts say. Siberian archeologists say it dates from 3,900 to 3,500 years ago.

The armor was buried separate from its owner and is a unique example of battle dress. It could have been a gift, obtained through trade, or the spoils of war. It was located 1.5 metres underneath the ground at a site of a sanatorium where there are now plans to build a five star hotel.

Boris Konikov, curator of the excavations, said: ‘It is unique first of all because such armor was highly valued. It was more precious than life, because it saved life.

‘Secondly, it was found in a settlement, and this has never happened before.’

Nearby archeological finds belong to the Krotov culture, whose members lived in the forest steppe area of Western Siberia, but this bone armor more closely resembles that of the Samus-Seyminskaya culture, which originated in the area of the Altai Mountains.

Experts haven’t yet answered the question of which creature’s bones were used in making the armor. The find is now undergoing cleaning and restoration. Archaeologists hope that after that they will be able to make an exact copy of it.

Scientist Yury Gerasimov, a research fellow of the Omsk branch of the Institute of Archaeology and Ethnography, said: ‘While there is no indication that the place of discovery of the armor was a place of worship, it is very likely. Armor had great material value. There was no sense to dig it in the ground or hide it for a long time – because the fixings and the bones would be ruined.

‘Such armor needs constant care. At the moment we can only fantasise – who dug it into the ground and for what purpose. Was it some ritual or sacrifice? We do not know yet.’

Gerasimov, who is engaged in the restoration, said: ‘Each armor plate in the ground was divided into many small fragments, which are held only by this ground. The structure was removed from the excavation, in ‘monolith’ as archaeologists say – namely, intact with the piece of ground, not in separate plates, and taken to the museum.

‘Now we need to clean these small fragments of bone plates, make photographs and sketches of their location, and then glue them in a full plate.’

He is certain that the armor belonged to a ‘hero’, an ‘elite warrior who knew special methods of battle’ and would have ‘given good protection from weapons that were used at the time – bone and stone arrowheads, bronze knives, spears tipped with bronze, and bronze axes’.

The archeological site at Omsk includes a complex of monuments belonging to different periods. There are settlements, burial grounds, and manufacturing sites. Burials found here date from the Early Neolithic to the Middle Ages.