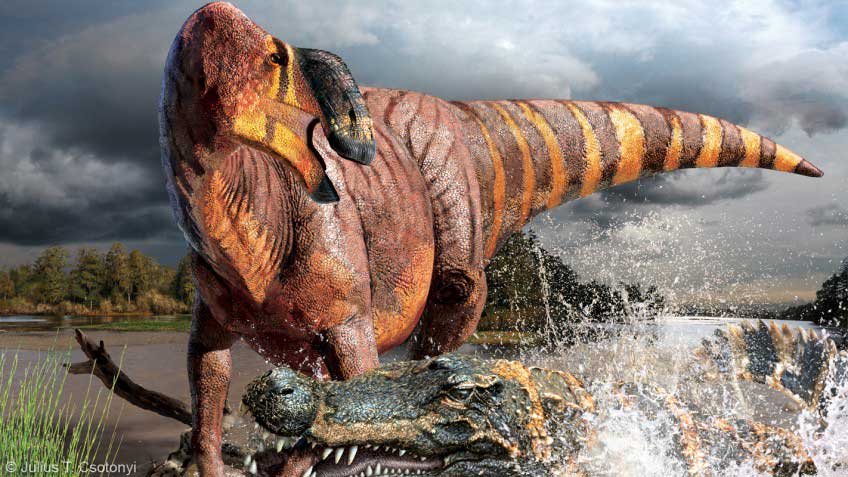 Call it the Jimmy Durante of dinosaurs – a newly discovered hadrosaur with a truly distinctive nasal profile. The new dinosaur, named Rhinorex condrupus by paleontologists from North Carolina State University and Brigham Young University, lived in what is now Utah approximately 75 million years ago during the Late Cretaceous period.

Rhinorex, which translates roughly into “King Nose,” was a plant-eater and a close relative of other Cretaceous hadrosaurs like Parasaurolophus and Edmontosaurus. Hadrosaurs are usually identified by bony crests that extended from the skull, although Edmontosaurus doesn’t have such a hard crest (paleontologists have discovered that it had a fleshy crest). Rhinorex also lacks a crest on the top of its head; instead, this new dinosaur has a huge nose.

Terry Gates, a joint postdoctoral researcher with NC State and the North Carolina Museum of Natural Sciences, and colleague Rodney Sheetz from the Brigham Young Museum of Paleontology, came across the fossil in storage at BYU. First excavated in the 1990s from Utah’s Neslen formation, Rhinorex had been studied primarily for its well-preserved skin impressions. When Gates and Sheetz reconstructed the skull, they realized that they had a new species.

“We had almost the entire skull, which was wonderful,” Gates says, “but the preparation was very difficult. It took two years to dig the fossil out of the sandstone it was embedded in – it was like digging a dinosaur skull out of a concrete driveway.”

Based on the recovered bones, Gates estimates that Rhinorex was about 30 feet long and weighed over 8,500 lbs. It lived in a swampy estuarial environment, about 50 miles from the coast. Rhinorex is the only complete hadrosaur fossil from the Neslen site, and it helps fill in some gaps about habitat segregation during the Late Cretaceous.

A snapshot of the Cretaceous

“We’ve found other hadrosaurs from the same time period but located about 200 miles farther south that are adapted to a different environment,” Gates says. “This discovery gives us a geographic snapshot of the Cretaceous, and helps us place contemporary species in their correct time and place. Rhinorex also helps us further fill in the hadrosaur family tree.”

When asked how Rhinorex may have benefitted from a large nose Gates said, “The purpose of such a big nose is still a mystery. If this dinosaur is anything like its relatives then it likely did not have a super sense of smell; but maybe the nose was used as a means of attracting mates, recognizing members of its species, or even as a large attachment for a plant-smashing beak. We are already sniffing out answers to these questions.”

The researchers’ results appear in the Journal of Systematic Paleontology.