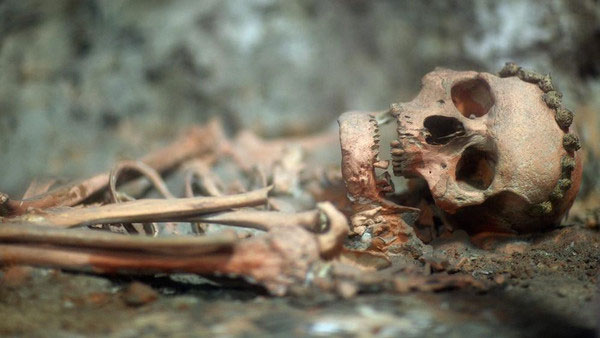 Leuven University agreed to hand the skeleton over

“A grave on the boulder hill at Nazlet Khater, Upper Egypt, yielded a skeleton of modern man with archaic features. The presence of a bifacial axe in the grave suggests that the grave is contemporaneous with a nearby mining site where similar bifacial axes were found. This chert mining site is dated between 35,000 and 30,000 years ago,” wrote P.M. Vermeersch, G. Gijselings and E. Paulissen January 1984 in their paper entitled “Discovery of the Nazlet Khater Man, Upper Egypt”.

The rare skeleton belonging to a subadult male individual was found during excavations conducted in the framework of the Belgian Middle Egypt Prehistoric Project of Leuven University. The excavators noted similarities of the Nazlet Khater Man with the skeletons of Jebel Sahaba and Wadi Halfa.

The skeleton had come into the possession of Leuven University in accordance with a law allowing foreign archaeological missions to have a share in the artefacts they discovered at archaeological sites in Egypt, reports Ahram Online.

Now, following diplomatic efforts between Egypt and Belgium, Leuven University has agreed to return the Nazlet Khater Man – after more than 30 years. The artefact is considered a very important artefact in the history of Egypt, as pointed out by Minister of Antiquities Mamdouh Eldamay.

The skeleton will be repatriated next week and out on display at the National Museum of Egyptian Civilization in Fustat.