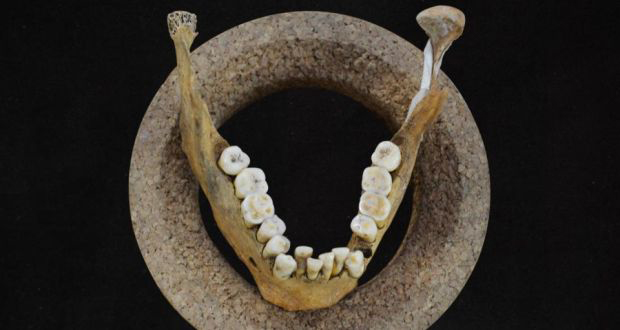 Malocclusion and dental crowding arose 12,000 years ago with earliest farmers

Hunter-gatherers had almost no malocclusion and dental crowding, and the condition first became common among the world’s earliest farmers some 12,000 years ago in Southwest Asia, according to findings published (04 Feb 2015) in the journal PLOS ONE.

By analysing the lower jaws and teeth crown dimensions of 292 archaeological skeletons from the Levant, Anatolia and Europe, from between 28,000-6,000 years ago, an international team of scientists have discovered a clear separation between European hunter-gatherers, Near Eastern/Anatolian semi-sedentary hunter-gatherers and transitional farmers, and European farmers, based on the form and structure of their jawbones.

“Our analysis shows that the lower jaws of the world’s earliest farmers in the Levant, are not simply smaller versions of those of the predecessor hunter-gatherers, but that the lower jaw underwent a complex series of shape changes commensurate with the transition to agriculture,” says Professor Ron Pinhasi from the School of Archaeology and Earth Institute, University College Dublin, the lead author on the study.

In the case of hunter-gatherers, the scientists from University College Dublin, Israel Antiquities Authority, and the State University of New York, Buffalo, found a correlation between inter-individual jawbones and dental distances, suggesting an almost “perfect” state of equilibrium between the two. While in the case of semi-sedentary hunter-gatherers and farming groups, they found no such correlation, suggesting that the harmony between the teeth and the jawbone was disrupted with the shift towards agricultural practices and sedentism in the region. This, the international team of scientists say, may be linked to the dietary changes among the different populations.

The diet of the hunter-gatherer was based on “hard” foods like wild uncooked vegetables and meat, while the staple diet of the sedentary farmer is based on “soft” cooked or processed foods like cereals and legumes. With soft cooked foods there is less of a requirement for chewing which in turn lessens the size of the jaws but without a corresponding reduction in the dimensions of the teeth, there is no adequate space in the jaws and this often results in malocclusion and dental crowding.

The link between chewing, diet, and related dental wear patterns is well known in the scientific literature. Today, malocclusion and dental crowding affects around one in five people in modern-world populations. The condition has been described as the “malady of civilization”.