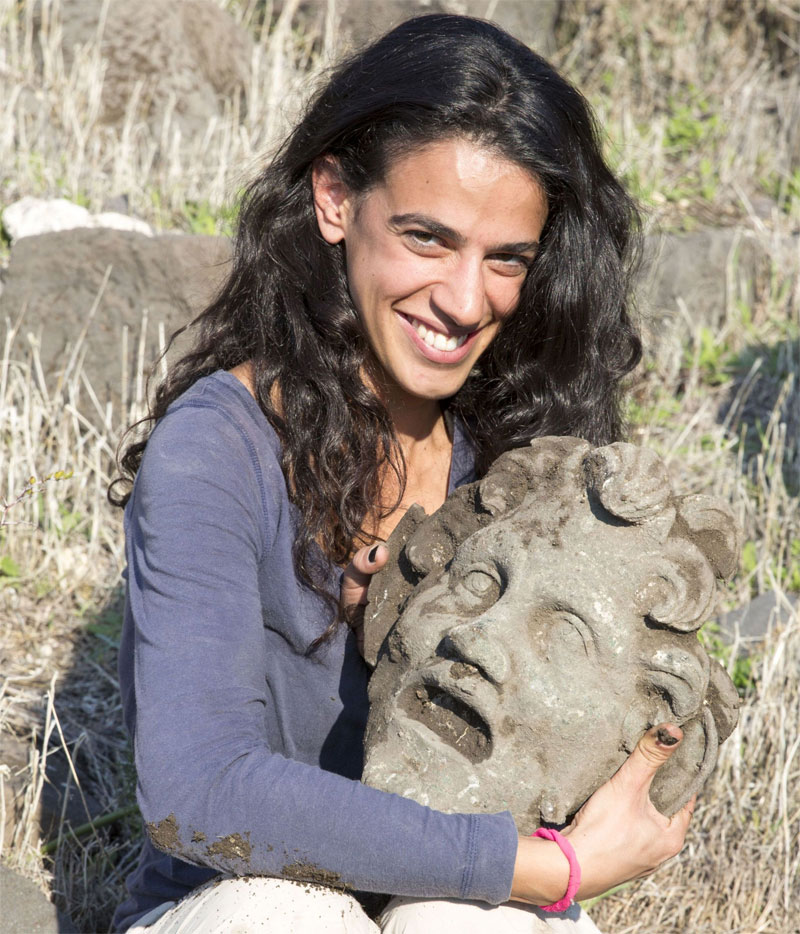 A large bronze mask of the god Pan, the only of its kind, was uncovered at the University of Haifa’s excavation at Hippos-Sussita National Park. According to Dr. Michael Eisenberg, bronze masks of this size are extremely rare and usually do not depict Pan or any of the other Greek or Roman mythological images. “Most of the known bronze masks from the Hellenistic and Roman periods are miniature”.

It seems that in recent years, the mysteries of Hippos-Sussita have been revealing their secrets in an extraordinary way: first, a sculpture of Hercules was exposed by the winter rains of 2011, then, two years later, a basalt tombstone with a sculpture of the deceased’s bust was uncovered. Now there is a new surprise: the only finding of a bronze mask of unnatural size, in the form of the god Pan/Faunus.

Excavations at Hippos-Sussita are usually conducted in the summer. However, a series of intriguing structures on the ridge of the city, where the ancient road passed, led to a one-day dig in the winter. The dig focused on a basalt structure which the researchers assumed was a type of armoured hangar for the city’s projectile machines. The finding of a ballista ball made of limestone, a different material from the basalt that was customarily used at Hippos-Sussita to make balista balls, made them realize that it was an enemy’s projectile.

In light of this interesting find the researchers decided to search the structure for coins to help them date the balls. It didn’t take long for the metal detector, operated by the capable hands of Dr. Alexander Iermolin, head of the conservation laboratory at the Institute of Archaeology at the University, to start beeping frantically. The archialogosts were not yet aware of what was in store for them: “After a few minutes we pulled out a big brown lump and realized it was a mask. We cleaned it, and started to make out the details: The first hints that helped us recognize it were the small horns on top of its head, slightly hidden by a forelock,” said Dr. Eisenberg.

Horns like the ones on the mask are usually associated with Pan, the half-man half-goat god of the shepherds, music and pleasure. A more thorough cleaning in the lab, revealed  strands of a goat beard, long pointed ears, and other characteristics that led Dr. Eisenberg to identify the mask as depicting a Pan/Faunus/Satyr. “The first thought that crossed my mind was, ‘Why here, beyond the city limits?’ After all, the mask is so heavy it could not have just rolled away. The mask was found nearby the remains of a basalt structure with thick walls and very solid masonry work, which suggested a large structure from the Roman period. A Pan altar on the main road to the city, beyond its limits, is quite likely. After all, Pan was worshipped not only in the city temples but also in caves and in nature. The ancient city of Paneas, north of Hippos-Sussita, had one of the most famous worshipping compounds to the god Pan inside a cave. Because they included drinking, sacrificing and ecstatic worship that sometimes included nudity and sex, rituals for rustic gods were often held outside of the city”, Dr. Eisenberg explained.

Now the archeologists have begun to uncover the basalt structure, in the hopes of finding more clues to its purpose. They assume that it was used for defensive purposes. “Perhaps in a later period, during the Pax Romana, when the city fortifications were not required, the building turned into a place of worship to the god of shepherds, and maybe what we have here is a magnificent fountain-head or burial offerings of a nearby mausoleum,” Dr. Eisenberg suggests.

As mentioned, the researchers are unfamiliar with any similar bronze mask from the Roman or Hellenistic era of Pan or a Satyr. “Most of the masks are usually similar in size to theater masks, are made of stone or terracotta and are of ritual, apotropaic, decorative or symbolic significance. I contacted the curators of some of the world’s greatest museums, and even they said that they were not familiar with the type of bronze mask that we found at Hippos. Hippos-Sussita cannot compete in wealth with the ancient cultural centers of the Roman Empire and as such, a finding of this kind here, of all places, is amazing,” concluded Dr. Eisenberg.