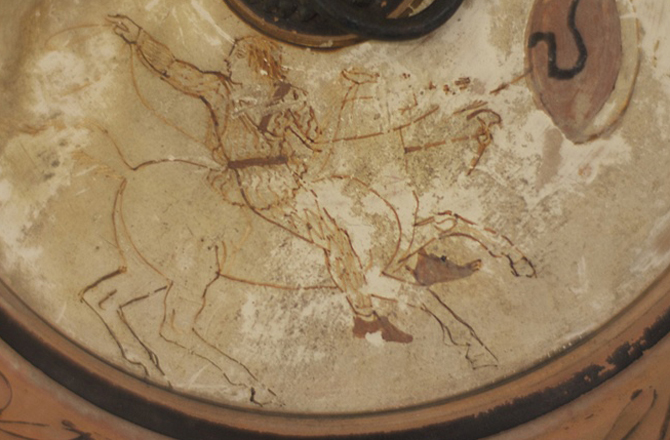 The vase is held in the University of Mississippi’s David M. Robinson Memorial Collection

An Amazon depicted on an Attic white-ground pyxis was accidentally noticed by a scholar doing research in the University of Mississippi’s David M. Robinson Memorial Collection. The vase is dated to 480-450 BC.

The Amazon is on horseback in a battle against a Greek warrior. She is also twirling a lasso. She looks back over her shoulder at the lasso she is swinging while the Greek man crouches under his shield with a spear.

“The rest of her rope, painted purple like her shoes, is coiled around her waist, and she correctly holds the lariat’s loop near the knot,” Stanford University’s Departments of Classics and History of Science Professor Adrienne Mayor said. “Her technique is accurate for roping something straight ahead,” she added.

Mayor noticed the vase at the University of Mississippi Museum during research for her 2014 book “The Amazons: Lives and Legends of Warrior Women across the Ancient World.”

“The vase would have held a Greek woman’s intimate make-up or jewelry. The images on the box suggest that women enjoyed scenes of Amazons getting the best of male Greek warriors,” Mayor said.

“There’s plenty to explore in terms of how the scene might relate to the arts of seduction, and more broadly regarding male and female attitudes to one another in ancient Athens,” David Saunders, associate curator at J. Paul Getty Museum’s department of antiquities and specialist in Greek vase-painting and iconography said.