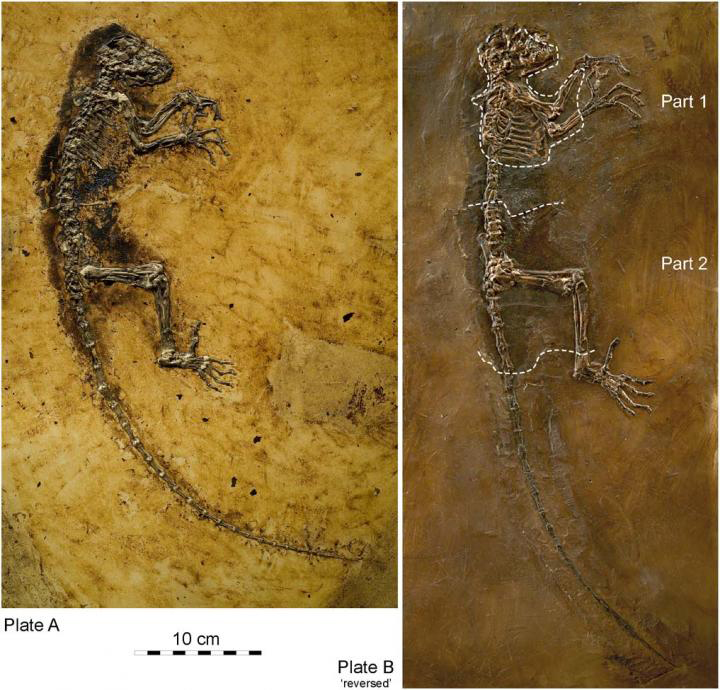 Was Darwinius a little longer in the tooth than previously thought?

A famous fossil of an early primate shares more in common with modern lemurs based on how its teeth erupted, according to new model developed at University of Toronto Scarborough.

By looking at the sequence in which adult teeth come in – known as dental eruption – in primates, they found it had more in common with lemurs than squirrel monkeys, the model species used by the researchers who discovered Darwinius.

“Every species has a particular pattern by which their teeth come in and this allows us to estimate the age of fossils that died before their adult teeth could emerge,” says López-Torres.” It seems that the pattern of dental eruption for Darwinius is more similar to that of lemurs than to that of monkeys.”

“The major difference is we found that anthropoids (ancestors to monkeys, apes and humans) are characterized by a late eruption of the third molar, which is something Darwiniusclearly doesn’t show,” he says. “One idea that still stands links Darwinius to anthropoids, but since it doesn’t show this late eruption, it looks more like a modern lemur.”

Their model also suggests Darwinius was a little older at the time of death and would have weighed slightly less as an adult than the original estimates predicted.

The team that originally discovered Darwinius argued the 47-million-year-old fossil was more closely related to haplorrhines, the group that includes anthropoids (monkeys, apes, and humans) and tarsiers. Subsequent studies by the same group suggested Darwinius was specifically related to anthropoids, the primate lineage in which humans belong.

Other researchers argue that Darwinius is more likely a strepsirrhine, meaning it belongs to the opposite branch of the primate family tree, closer to lemurs and lorises.

While the new model proposes only a slight change in adult weight and age at death – 622-642g and 1.05-1.14 years compared to original estimates of 650-900g and 9-10 months – the findings are significant in terms of figuring out what Darwinius was actually like.

“It may seem trivial going from 9 or 10 months to a little over a year, but if you consider that, for example, some species of lemur can reproduce at a year old, this difference could mean a major change in what the life of this animal was like,” notes López-Torres.

“Our goal as palaeontologists is to bring these animals back to life. It’s the best preserved fossil primate. It even has stomach contents, so there’s a lot of potential for understanding its biology,” adds Silcox.

“We want to be able to answer broader evolutionary questions, but we also need to have a nuanced view of what this particular animal was like.”

The model is explained in a new research published online in the journal Royal Society Open Science.