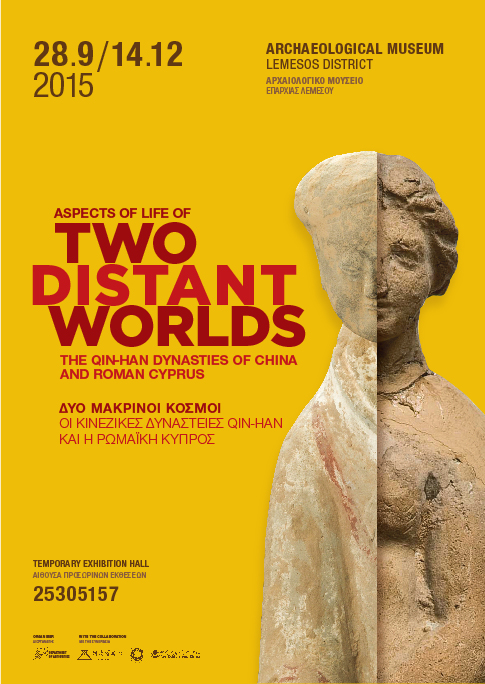 The Qin-Han Dynasties of China and Roman Cyprus: Aspects of Life of Two Distant Worlds

Archaeological Museum of the Lemesos District

“The Qin-Han Dynasties of China and Roman Cyprus: Aspects of Life of Two Distant Worlds” opens at the Archaeological Museum of the Lemesos District, Cyprus, on Monday the 28th of September 2015 at 19.00. The exhibition will run through the 14th December 2015.

In this exhibition, ancient objects from both civilizations are displayed one next to the other, arranged in three categories, in an original as well as daring effort to bring together, under the same roof, Two Distant Worlds.

The mutual organization of archaeological exhibitions between the Republic of Cyprus and the People’s Republic of China was agreed during the visit of the Chinese Deputy Minister of Culture in Cyprus, during October 2013. At that time a bilateral Agreement was signed, concerning the prevention of theft, of illicit excavations and of illegal import and export of cultural goods between the two countries. It must be stressed that it is the first time that an exhibition with archaeological artifacts from another country is organized in Cyprus. This exhibition is therefore very important, since it reminds us that antiquities can stimulate dialogue and mutual understanding with peaceful means.