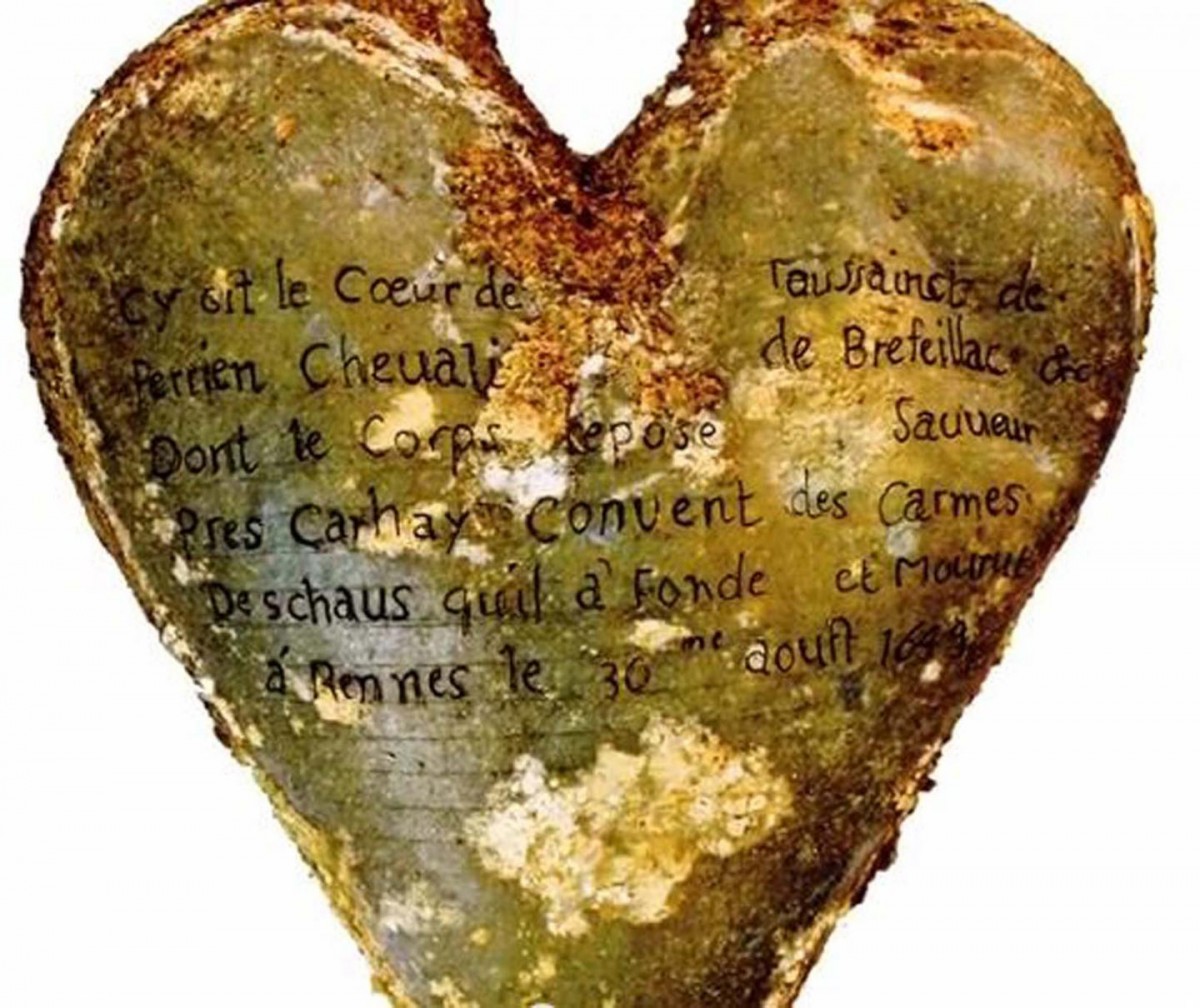 Photo caption
News: Convent of the Jacobins in Rennes

Heart-shaped lead urns shed light on the health conditions of the people buried more than 400 years ago.

Researchers using modern imaging techniques on hearts more than 400 years old found at an archeological site were able to learn about the health conditions of the people buried there, according to a new study presented today at the annual meeting of the Radiological Society of North America (RSNA).

Archaeologists with the National Institute for Preventive Archaeological Research excavating the basement of the Convent of the Jacobins in Rennes, France, unearthed several grave sites dating back to the late 16th or early 17th century.

Among the items unearthed in the burial vaults of elite-class families were five heart-shaped lead urns. Inside each urn was a preserved human heart. A team of radiologists, including one with a background in forensics, was called in to examine the hearts. Additional researchers, including forensic physicians, archeologists, pathologic physicians and physicists, were brought in from the Molecular Anthropology and Synthesis Imaging and the Institute of Metabolic and Cardiovascular Diseases.

The research team used MRI and CT to obtain clinical images of the hearts. While the images were impressive, due to the embalming materials used to preserve the hearts, very little health information could be obtained.

“We tried to see if we could get health information from the hearts in their embalmed state, but the embalming material made it difficult,” said study author Fatima-Zohra Mokrane, M.D., radiologist at Rangueil Hospital at the University Hospital of Toulouse in France. “We needed to take necessary precautions to conduct the research carefully in order to get all possible information.”

The research team carefully cleaned the hearts, removing the embalming material. MRI and CT scans were redone. On the new set of CT images, researchers were able to identify the different heart structures, such as chambers, valves and coronary arteries. Once the tissue was rehydrated, researchers were better able to identify myocardial muscles with MRI. Classic techniques, such as dissection, external study and histology, were also used to examine the heart tissues.

One heart appeared healthy and showed no signs of disease. Three of the hearts did show signs of disease, as plaque was found on the coronary arteries. The fifth heart had been poorly preserved and, therefore, could not be studied.

“Since four of the five hearts were very well preserved, we were able to see signs of present-day heart conditions, such as plaque and atherosclerosis,” Dr. Mokrane said.

During the excavation, the archeologists and the research team also discovered that the heart of one male–later identified by an inscription on one of the lead urns as Toussaint Perrien, Knight of Brefeillac–had been removed upon his death and later buried with his wife, Louise de Quengo, Lady of Brefeillac, whose preserved body was also found at the site.

“It was common during that time period to be buried with the heart of a husband or wife,” Dr. Mokrane said. “This was the case with one of our hearts. It’s a very romantic aspect to the burials.”