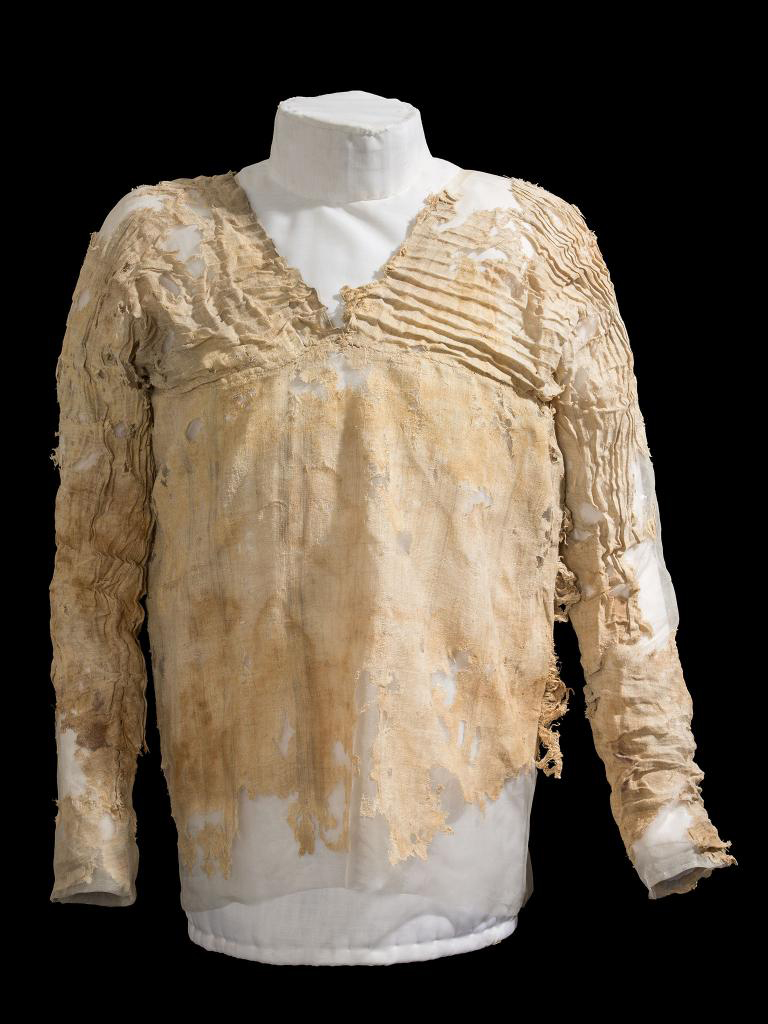 The Tarkhan Dress, a V-neck linen shirt currently on display in the UCL Petrie Museum of Egyptian Archaeology, has been confirmed as the world’s oldest woven garment with radiocarbon testing dating the garment to the late fourth-millennium BC.

Radiocarbon testing conducted in 2015 by the University of Oxford’s radiocarbon unit, and published this week on Antiquity’s Project Gallery, has established that the dress was made between 3482-3102 BC with 95% accuracy.

Although the dress was thought to be Egypt’s oldest garment, and the oldest surviving woven garment in the world, the precise age of the dress was uncertain as previous carbon dating proved too broad to be historically meaningful. The new results both confirm the dress’s antiquity and also suggest that it may be older than previously thought, pre-dating the First Dynasty.

The team from the University of Oxford, led by Dr Michael Dee, measured a 2.24mg sample of the dress to determine how much radiocarbon, a radioactive isotope of carbon, remained in the linen. From this they were able to provide an indicative date for when the linen was woven. Linen, from which the Tarkhan Dress is made, is especially suitable for radiocarbon dating as it is composed of flax fibres that grow over a relatively short time.

Dr Alice Stevenson, Curator at the UCL Petrie Museum of Egyptian Archaeology, said: “The survival of highly perishable textiles in the archaeological record is exceptional, the survival of complete, or almost complete, articles of clothing like the Tarkhan Dress is even more remarkable. We’ve always suspected that the dress dated from the First Dynasty but haven’t been able to confirm this as the sample previously needed for testing would have caused too much damage to the dress.

“Although the result is a little less precise than is now routinely possible through radiocarbon dating, as the sample was so small, it’s clear that the linen for the dress was made at the cusp of the First Dynasty or even earlier.”

Originally excavated by Egyptologist Flinders Petrie in 1913 from a First Dynasty tomb at Tarkhan, an Egyptian cemetery located 50km south of Cairo, the dress lay undiscovered with various other textiles until 1977 when the bundle was sent to the Victoria and Albert Museum in London for conservation work.

The dress itself is made from three pieces of sturdy hand-woven linen with a natural pale grey stripe with knife-pleated sleeves and bodice. The hem is missing so it’s not possible to know the precise length of the dress, but the dimensions indicate that it fitted a young teenager or a slim woman. Although the exact context of its use remain unclear, there are visible signs of wear indicating that it was worn in life.

The Tarkhan Dress is on display at the UCL Petrie Museum of Egyptian Archaeology.