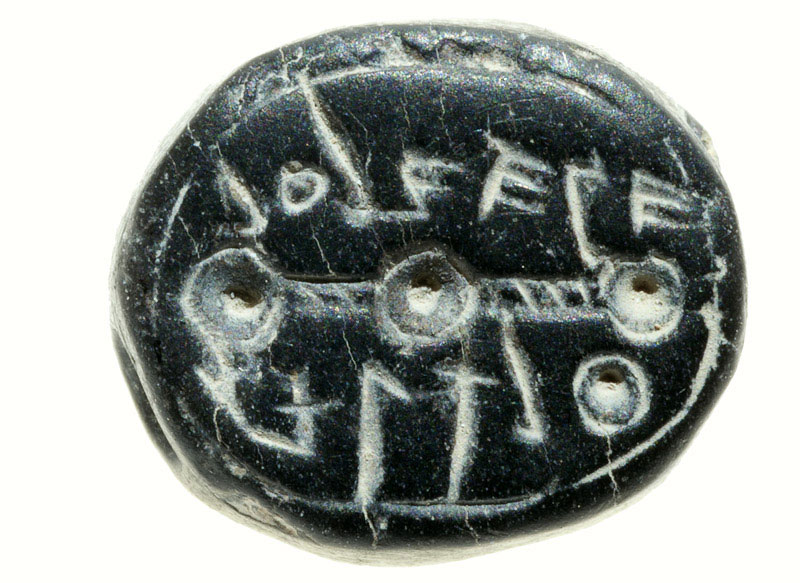 Excavations at the City of David

A rare almost 2,600 year old seal bearing the name “Elihana bat Gael” was discovered in excavations conducted by the Israel Antiquities Authority at the City of David, in the Jerusalem Walls National Park. Another seal belonging to a man named “Sa‘aryahu ben Shabenyahu” was found nearby. According to the excavation directors, “the owner of the seal was exceptional compared to other women of the First Temple period: she had legal status which allowed her to conduct business and possess property”.

Who were Elihana bat Gael and Sa‘aryahu ben Shabenyahu? Two seals bearing Hebrew names were uncovered in a large building dating to the First Temple period in excavations the Israel Antiquities Authority is carrying out in the Giv‘ati parking lot at the City of David, in the Jerusalem Walls National Park. “Finding seals that bear names from the time of the First Temple is hardly a commonplace occurrence, and finding a seal that belonged to a woman is an even rarer phenomenon”, said the researchers.

After nine years of excavations by the Israel Antiquities Authority, in cooperation with the Nature and Parks Authority and the City of David Foundation, archaeologists at the site succeeded in reaching the strata of ancient Jerusalem dating to the First Temple period where a surprise awaited them: they found the two seals inside a structure built of magnificent ashlars. The researchers believe that the well-constructed building was used as an administrative center.

According to archaeologists, Dr. Doron Ben-Ami, Yana Tchekhanovets and Salome Cohen, excavation directors on behalf of the Israel Antiquities Authority, explain, “Personal seals, such as those of Elihana and Sa‘aryahu, were used for signing documents, and were frequently inlaid as part of a ring that was worn by the owner. In antiquity they designated the identity, genealogy and status of the owner of the seal”.

On the rare woman’s seal, which is made of semi-precious stone, appears the mirror-writing of “to Elihana bat Gael”, inscribed in ancient Hebrew letters. The female owner of the ring is mentioned here together with the name of her father.

According to Dr. Hagai Misgav of Hebrew University in Jerusalem, “Seals that belonged to women represent just a very small proportion of all the seals that have been discovered to date. This is because of the generally inferior economic status of women, apart from extraordinary instances such as this. Indeed, the name Elihana does not appear in the Bible, and there is no other information regarding the identity of the woman, but the fact that she possessed a seal demonstrates her high social status”. Dr. Misgav adds, “Most of the women’s seal that are known to us bear the name of the father rather than that of the husband. Here, as in other cases, this might indicate the relatively elevated status of Elihana, which depended on her original family, and not on her husband’s family. It seems that Elihana maintained her right to property and financial independence even after her marriage and therefore her father’s name was retained; however, we do not have sufficient information about the law in Judah during this period”. The name Eliha is known from a contemporary Ammonite seal and is the feminine form of the name Eli, known from the Bible. The script appearing on the seal is remarkably similar to the script on Ammonite seals, and this might indicate the foreign origin of the artisan who carved the seal and possibly the foreign origin of Elihana, who apparently came from east of the Jordan River”.

The Book of Proverbs (31:13-23) states that an ideal wife is responsible for providing for the needs of her household when her husband is engaged in public and legal affairs at the city gate – “She seeks wool and flax, and works with willing hands… Her husband is known in the gates, when he sits among the elders of the land”. An archive of documents preserved in the Judean desert from the time of the Second Temple indicates, among other things, the business of Babatha bat Shimon, a female land owner who had legal status. But as generally speaking, evidence of legal and financial independence in the Bible and archaeology are rare, and it seems that the exception to the rule indeed sheds light on the rule itself.

The second seal that was exposed in the excavation was also in mirror-writing and bears the inscription “to Sa‘aryahu ben Shabenyahu”. The name Sa‘aryahu appears on a sherd from Arad, and apparently means “the Lord, which was revealed in a storm” (see Job 38).