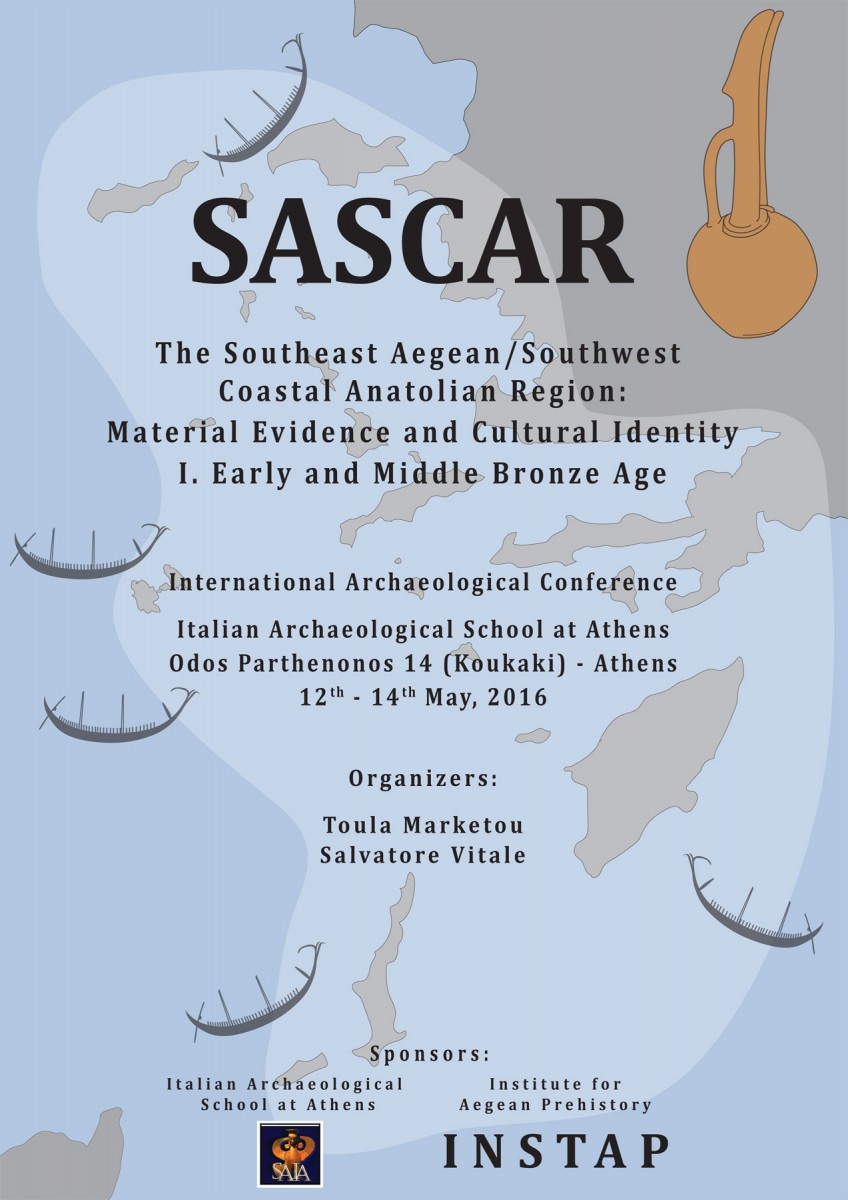 The Italian Archaeological School at Athens presents the SASCAR International Conference, which will take place at the School from May 12th to May 14th, 2016. The SASCAR International Conference is focused on the Southeast Aegean/Southwest Coastal Anatolian Region and the neighboring areas during the Early and Middle Bronze Age periods. It is an event organized by Toula Marketou and Salvatore Vitale and sponsored by the Italian Archaeological School at Athens and the Institute for Aegean Prehistory (INSTAP).

This conference is the first in a series of three events focused on material evidence and cultural identity in the Southeast Aegean/Southwest Coastal Anatolian Region (SASCAR) during the Bronze Age.

The SASCAR may be defined as the area between Kasos, Karpathos, and Rhodes to the south, Astypalaia to the west, Samos to the north, and Miletus and Tavşan Adası to the east. As a major passageway between Asia Minor, Cyprus, and the Near East on one side and the western Aegean on the other, the SASCAR developed from the Early Bronze Age (EBA) a dynamic and distinct cultural assemblage, which included important sites such as the Samian Heraion, Miletus, the “Serraglio”, and Ialysos.

In the last decades, the study of this area has received increased scholarly attention. The focus of this work, however, has been significantly uneven chronologically and geographically, as well as in terms of theoretical approach and perspective. In fact, research and publications have concentrated mainly on the larger islands and on the Late Bronze Age (LBA) period. At the same time, investigation and interpretation of the evidence have been carried out mainly from a western Aegean point of view, thus emphasizing the quantitative and qualitative impact of Greek mainland and Cretan features on the SASCAR local traditions. Such a tendency is icastically outlined by the use of terms such as “Minoanization” and “Mycenaeanization” to describe complex cultural processes, which occurred at different times and with different intensities at an individual site level.

This attitude produced a neglect of the role of smaller islands and settlements, as well as a relative dearth of information on earlier developments in the area, particularly the (Final Neolithic) FN to EBA transition and the Middle Bronze Age (MBA) period. The aim of this first conference is to fill this gap and achieve a comprehensive definition of the SASCAR as a separate set of cultural traditions. Specific emphasis is placed on the phases between the end of the FN and the end of the MBA, here synchronized with Middle Minoan IIIA in Cretan terms. In order to achieve these goals, the conference is focused on three main subjects: (a) Chronology and synchronisms; (b) Significant aspects of material evidence and cultural identity; and (c) Relationships with neighboring areas.

For the first subject, the aim is not simply to provide up-to-date stratigraphic and ceramic reports for each site, but also to produce: (a) A reliable chronological sequence and terminology for the entire region; and (b) A synchronization with nearby areas, such as the rest of western Asia Minor, Cyprus, the Cyclades, Crete, and the Greek mainland. The second subject is devoted to the following diagnostic elements of material evidence and cultural identity: (a) Settlement patterns, with a particular focus on the relationship between landscape, natural resources, human impact, and subsistence strategies; (b) Architectural features, both in habitation and funerary contexts; (c) Burial and ritual practices; (d) Craftsmanship and related techniques, such as weaving, metallurgy, and fresco painting; and (e) Technological aspects, such as the reconstruction on a site by site basis of the chaîne opératoire in the production of ceramic and non-ceramic objects.

The aim of the third subject is to investigate the relationships of the SASCAR with the following six neighboring areas: (a) The northeast Aegean; (b) Northwest coastal and western inland Anatolia; (c) Cyprus; (d) The Cyclades; (e) Crete; and (f) The Greek Mainland. Contacts will be explored in both directions, not only from the six areas above to the SASCAR, but also vice versa. This holistic approach is necessary to fully understand the meaning of cultural interactions in the eastern Mediterranean during the EBA and MBA, assuming that ideas and notions do not necessarily move unidirectionally from active centers to more or less passive peripheries. In this respect, the conference aims to look at the evidence through various, and potentially alternative, interpretative lenses, such as “colonization”, “acculturation”, “transculturalism”, “multivocality”, “hybridization”, and “cultural entanglement”.

Toula Marketou Ephorate of Antiquities of the Dodecanese ([email protected])