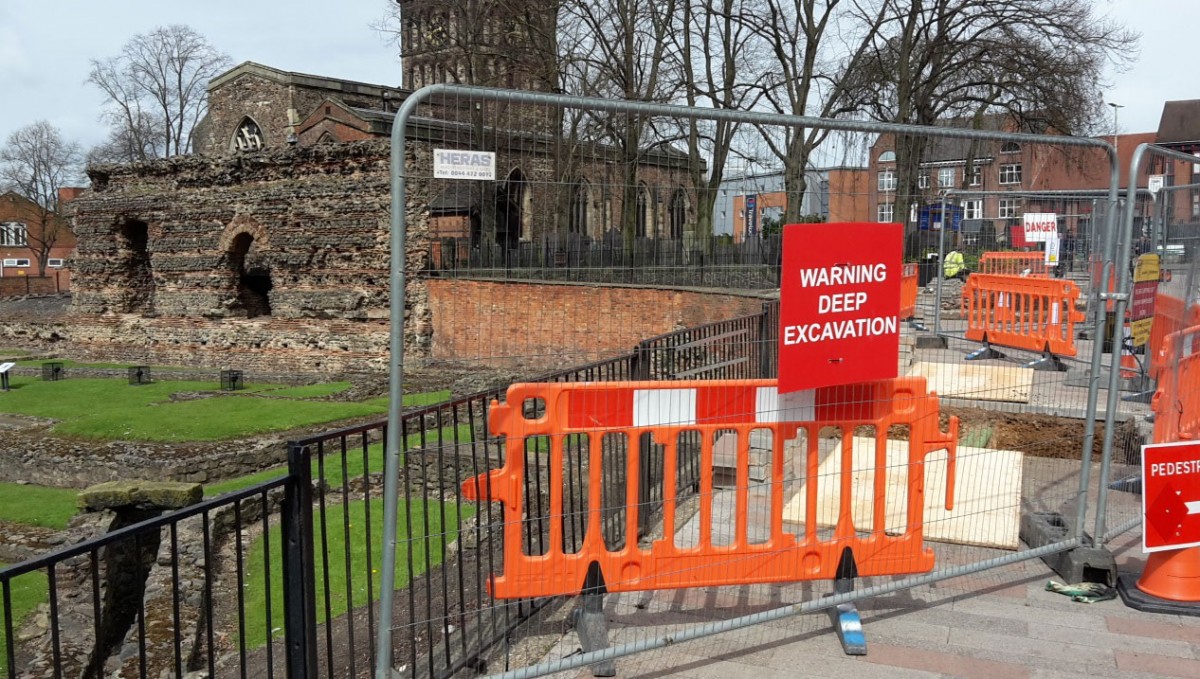 Beneath the earth around the Jewry Wall Museum

Archaeologists from the University of Leicester have uncovered a wealth of history hidden beneath the earth around the Jewry Wall Museum.

The team from the University of Leicester Archaeological Services (ULAS), led by Gavin Speed, has already unearthed Roman walls, pottery and human remains during exploratory work at the popular city attraction, near St Nicolas Circle.

It is part of a project by Leicester City Council to enhance the museum.

However, before construction of a new walkway over the southern edge of the ruins can begin, archaeologists must first evaluate the site and determine whether there is anything of historical value which can be collected or documented.

Six trenches have been carved out near the original excavations of the Jewry Wall baths, carried out by Kathleen Kenyon in the 1930s.

In between the buried tangle of live electric, gas, fibre optic cables and Victorian sewage pipes archaeologists uncovered a layer of surviving Roman archaeology, which appears to be in good condition.

Human remains have also been discovered in the trench closest to St. Nicholas Church – which stands to the north east of the site.

There are no immediate plans to exhume the remains.

“The Roman buildings discovered could be additional rooms associated with the bath complex, or else a separate building adjacent to it.

“Alternatively, it may be part of the same structure as the Peacock Pavement building, discovered in 1898 and excavated in 1965, which lay just 15 metres to the south east, believed to be a town house for an important official.

“Despite the narrow ‘window’ in each trench, the evaluation is showing the good survival of Roman remains.”

The project to expand the Jewry Wall Museum is expected to triple the number of visitors to the complex, according to Leicester City Council.

The new walkway will link St Nicholas Circle to the entrance of the building housing the former Vaughan College. Jewry Wall Museum and site includes one of the largest surviving Roman walls in the UK, and the extensive site of a Roman bath house, along with a city council-run museum. In addition to its Roman collections, it tells the story of early Leicester from prehistoric times to the Middle Ages.