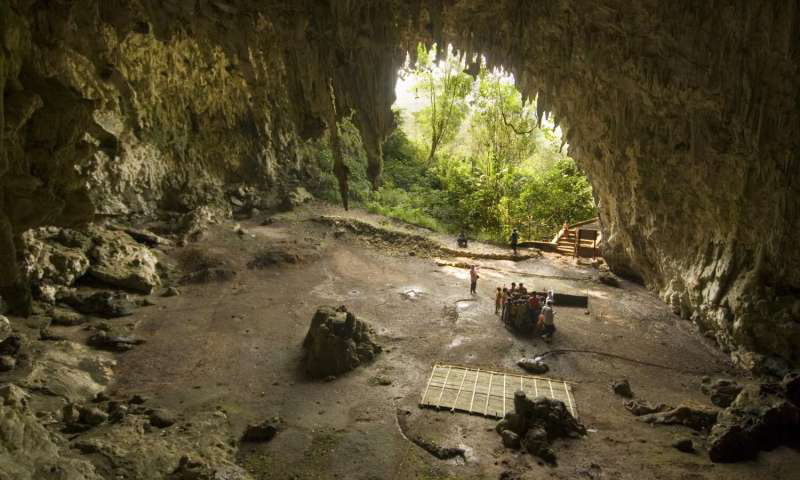 Research led by the University of Wollongong Australia

Crucial new evidence has revealed modern humans (Homo sapiens) were likely using fire at Liang Bua 41,000 years ago, narrowing the time gap between the last hobbits (Homo floresiensis) and the first modern humans at this site on the Indonesian island of Flores.

The research, led by the University of Wollongong Australia (UOW) and Indonesia’s National Research Centre for Archaeology and published in the Journal of Archaeological Science yesterday, is among the earliest evidence of modern humans in Southeast Asia.

Lead author Dr Mike Morley, a research fellow and geoarchaeologist at UOW’s Centre for Archaeological Science (CAS), said the find is “extremely important” in the quest to discover why and how the hobbit disappeared, around 50,000 years ago.

The story of the hobbit starts in 2003, when an international team of researchers, including those from UOW, uncovered the remains of a previously unknown species of small-statured hominins at Liang Bua. Homo floresiensis, affectionately dubbed ‘the hobbit’ for her tiny one-metre stature, would rewrite history books, capture imaginations around the world and go on to be dubbed ‘the scientific find of the century’.

After revised dating estimates of the original hobbit skeleton—published in Nature in March—placed the bones between 190,000 and 60,000 years old (it was previously believed to have survived on Flores until as recently as 12,000 years ago), and the most recent stone tools at 50,000 years old, a gap in the chronology of the sediment sequence opened up—researchers had no idea what happened at the site between 46,000 and 20,000 years ago.

Dr Morley and colleagues, including CAS geoarchaeologist Professor Paul Goldberg and archaeologist Thomas Sutikna, were able to fill that gap, detailing environmental changes at the site between 190,000 and 20,000 years ago and revealing something rather unexpected: physical evidence of fire places that were used between 41,000 and 24,000 years ago, most likely by modern humans for warmth and/or cooking.

“We now know that the hobbits only survived until around 50,000 years ago at Liang Bua. We also know that modern humans arrived in Southeast Asia and Australia at least 50,000 years ago, and most likely quite a bit earlier” Dr Morley said.

“This new evidence, which is some of the earliest evidence of modern human activity in Southeast Asia, narrows the gap between the two hominin species at the site.”

Given that no evidence for the use of fire by Homo floresiensis during roughly 130,000 years of presence at the site has been found, Dr Morley said modern humans are the most likely candidates for the construction of the fire places.

“Finding the fire places in such an excellent state of preservation allows insights into the behaviour of these people,” he added.

Dr Morley said researchers at Liang Bua are now searching for more evidence that further closes that gap in time; evidence that could place modern humans at exactly the right place, at the right time, possibly revealing an overlap between the two species, which could have led to interaction between the two species and ultimately the hobbit’s extinction.

As part of the study, Dr Morley used a technique called ‘micromorphology’ to examine the sediments taken from the site at a microscopic level of detail. After extracting sediment blocks from the rear of the cave (a different area from where the hobbit fossils were recovered), the samples were shipped back to UOW and wafer-thin slices, just 30microns thick (1 micron is 1000th of a millimetre), were analysed under a microscope. Spectroscopic analyses of the sediments were made by CAS archaeological chemist Dr Linda Prinsloo, and new radiocarbon dates were used to determine the age of each layer examined for the study.

The study, which also acts as further evidence of Homo sapiens dispersal through Southeast Asia and into Australia around 50,000 years ago, comes just weeks after UOW researchers, also from CAS, announced they had found 700,000 year old fossilised remains of what appear to be ancestors of the hobbit. The remarkable finds quash any remaining doubt that Homo floresiensis was a modern human afflicted with a disease causing the diminutive stature.