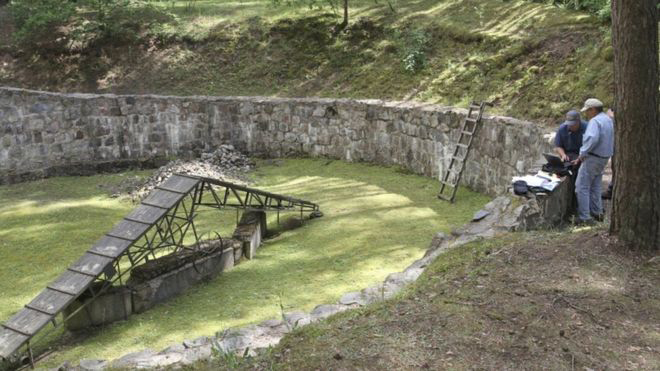 For the first time since the Holocaust the famous tunnel used by the prisoners of Ponar (Paneriai) to escape from the Nazis had been located using electrical resistivity tomography (ERT).

In an exciting new discovery using Electric Resistivity Tomography at the Ponar massacre site near Vilnius in Lithuania, the escape tunnel used by the so called ‘Burning Brigade’ to allude their captivity and certain deaths at the hands of the Nazis has been pinpointed.

Some 100,00 people, of whom 70,000 were Jews originating in Vilna and the surrounding area, were massacred and thrown into pits in the Ponar forest near the Lithuanian capital during World War II. With the retreat of the German forces on the eastern front and the advance of the Red Army, a special unit was formed in 1943. The task of this unit was to hide any evidence of the genocide. In Ponar this task was assigned to a group of 80 prisoners from the Stutthof concentration camp.

At night the prisoners were held in a deep pit, previously used for the execution of Vilna’s Jews, while during the day they worked to pen the mass graves, pile up the corpses on logs cut from the forest, cover them with fuel and incinerate them. All the while their legs were shackled and they worked knowing that when they had completed their task, they too would be murdered by their captors. Some of the workers decided to escape by digging a tunnel from the pit that was their prison. For three months they dug a tunnel some 35 meters in length, using only spoons and their hands. On the night of the 15th April, 1944, about 40 of the prisoners attempted to escape through the tunnel. Unfortunately they were quickly discovered by the guards and many were shot. Only 15 managed to cut the fence of the camp and escape into the forest. Twelve reached the partisan forces and survived the war.

Since WWII the exact location of the tunnel has remained unknown, even though a number of attempts were made to find it. Now, researchers from Israel (the Israel Antiquities Authority and the Vilna Gaon State Jewish Museum), the United States (University of Hartford), and Canada (Advisian of Calgary) rediscovered the tunnel using a geophysical technique used in mineral and oil exploration known as Electrical Resistivity Tomography from the pit used to imprison the captives, to an open space beside it.

The award-winning science series NOVA, produced by WGBH for PBS, has exclusive access to follow this excavation and the team, capture their stories, and restore the memory of this lost world in a new film slated to premiere in the US on PBS in 2017. The documentary will tell the story of the fate of the Jews of Vilna, Lithuania, now the modern city of Vilnius, through major archeological excavations of several sites in and around the city, including the larger excavation project at The Great Synagogue of Vilna. The discovery of the evidence of an escape tunnel at the Ponar pits sheds new light on a story of life, resistance and courage.

The researchers intend to return to the site in the near future to expose the tunnel for public viewing as part of the memorial for the victims of Vilna and the surrounding area.