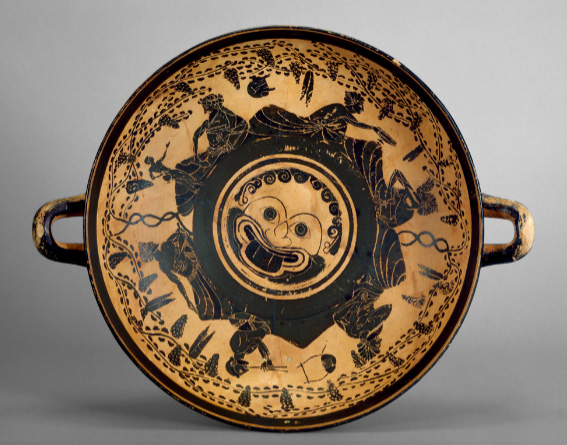 Oxford academics have teamed-up with an animator to bring ancient Greek vase scenes to life.

The images on this 2,500-year-old vase have been animated to show what life was like in ancient Greece. The interior of the cup depicts a vine with grapes around the outer band, a symposium scene around the middle band, and a gorgon’s head in the central tondo (the round area in the middle).

The Classics in Communities project, which is led by Mai Musié of Oxford University to encourage the teaching of ancient languages like Latin and Greek, has teamed up with the Panoply Vase Animation Project following an award from the Oxford University Knowledge Exchange Fund.

The animation is freely available to watch online, and its creators hope it is used by teachers and lecturers to support their teaching of topics related to ancient Greece.

‘Our animation features a cup that would once have been used at ancient drinking parties 2,500 years ago,’ says Dr Sonya Nevin, co-director of the Panoply Vase Animation Project.

‘The cup’s decoration comes to life in the animation, with a scene of drinking, chatting, and playing music and games now acted out before your eyes.

‘We hope it will be used by teachers, students and anyone else who has an interest in seeing classical history brought to life.’

The project is the latest initiative by Classics in Communities, a project involving Oxford University, the Iris Project, and Cambridge University.

‘Our aim is to promote the teaching of Latin and Ancient Greek at state schools in the UK,’ says founder Mai Musié of Oxford University’s Faculty of Classics.

‘This animation is just the latest way in which we hope to engage teachers and students in these fascinating subjects.’

The video can be viewed here.