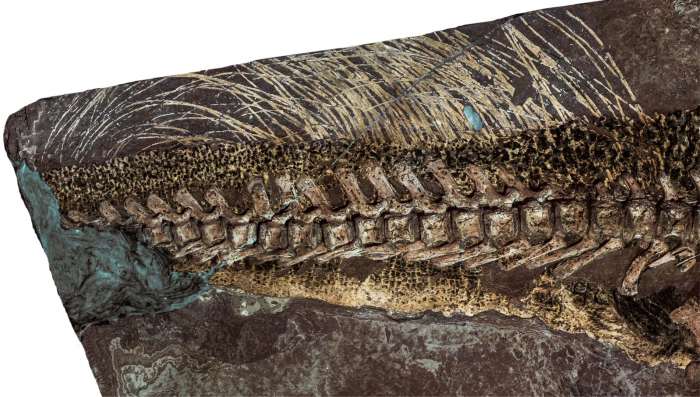 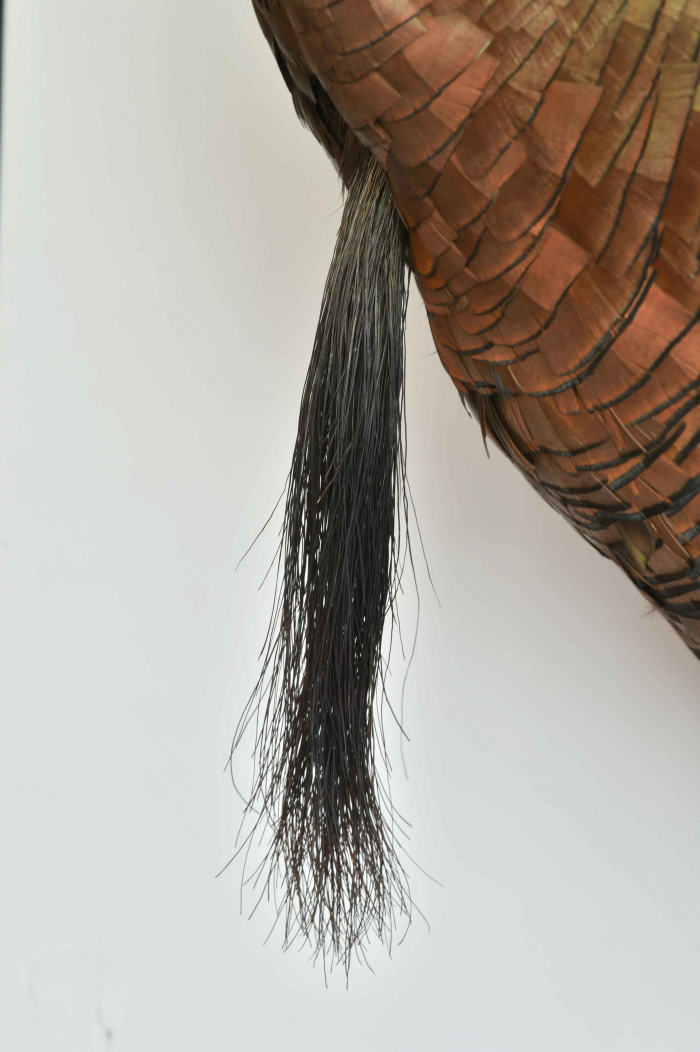 The turkey among dinosaurs

The tail bristles of Psittacosaurus

Using a new technology, the researchers around the ornithologist from Frankfurt were able to describe previously unknown details of this small dinosaur’s tail bristles. For the first time, these integumental structures are being compared with the “beard” of turkeys and other bristle-like structures in present-day birds and identified as evolutionary precursors of modern feathers. In addition, the scientists were able to show that the dinosaur’s dorsal side was darker in color than its underside, which they interpret as a camouflage coloration in closed forest habitats. The associated studies have been published in the scientific journals Palaeontology and Current Biology.

Arguably the most noteworthy trait of the Psittacosaurus fossil from China on display in the Senckenberg Nature Museum are the long, bristle-like structures on its tail. “We have now examined this detail more closely, using a new method –laser-stimulated fluorescence imaging,” explains Dr. Gerald Mayr of the Senckenberg Research Institute, and he continues, “Our studies clearly show that these bristles actually represent integumental structures.”

In the study, published in the scientific journal Palaeontology, Mayr and his colleagues compare these appendages to the bristle-like “beard” found on the chest of present-day turkeys and the spine on the forecrown of the screamers, a primitive family related to the ducks and geese. “To date, it has been controversial among experts whether the bristles of Psittacosaurus are comparable to the feathers of modern birds. The comparison with the turkey bristles shows that the fossil skin appendages can be considered evolutionary precursors of feathers,” adds Mayr.

In the case of Psittacosaurus, this comes as a real surprise. “Even though in the past few years numerous feathered dinosaurs have been described from China, Psittacosaurs are only remotely related to the present-day birds,” explains the ornithologist from Frankfurt.

By means of the fluorescence images, Mayr and his colleagues were able to demonstrate that the bristles occurred in bundles of 3 to 6 individual bristles. Since the tail was only partially covered with bristles, the researchers assume that they did not serve for thermal insulation, as was the case in other dinosaur species. “We rather assume that the dinosaurs used the bristles for communication purposes, for example during their display,” adds Mayr.

A further study just published in the journal Current Biology describes additional characteristics of the barely two-meter-long dinosaur’s exceptionally well-preserved skin: The upper part of the animal bore a darker color than its underside. The team of scientists presumes that this coloration served for camouflage purposes. “Based on our examination of the distribution of pigments in the skin, we created a model of Psittacosaurus and exposed it to different light conditions. In doing so, we could demonstrate that this species of dinosaur was able to blend in particularly well in areas with closed forests,” explains Mayr, and he summarizes, “We therefore assume that this was also the preferred habitat of Psittacosaurus.”