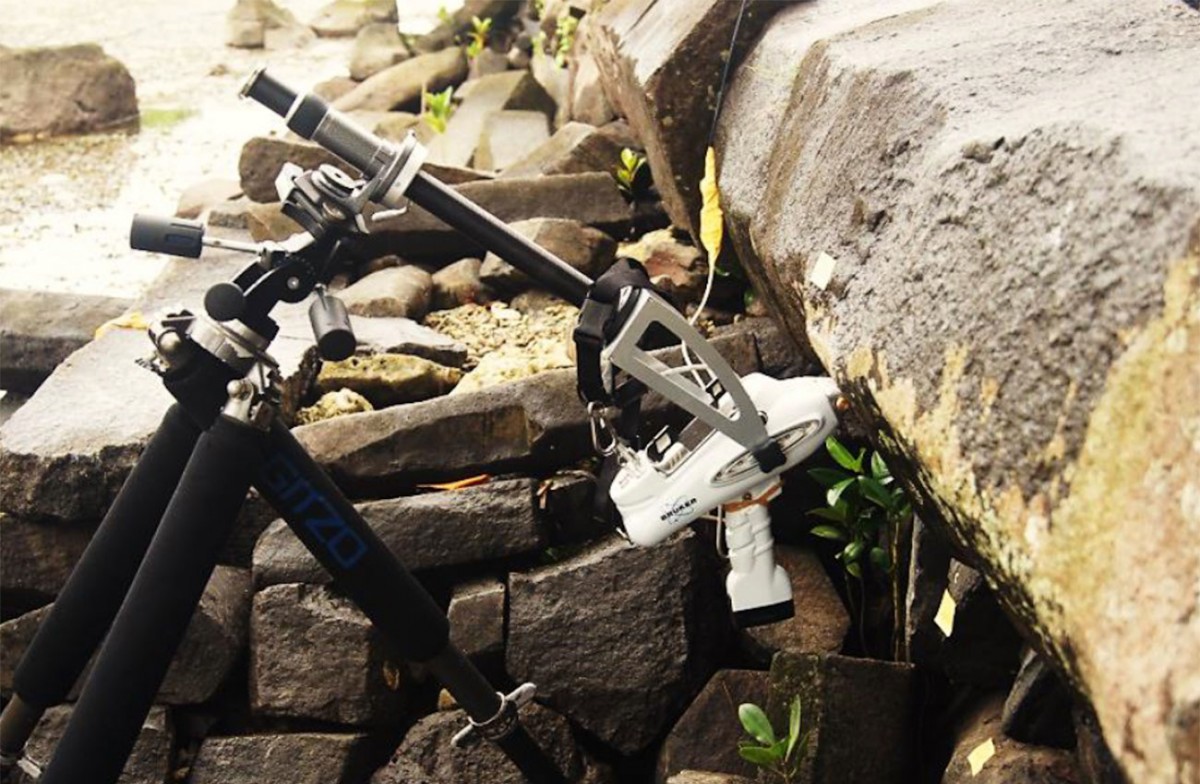 New dating on the stone buildings of Nan Madol suggests the ancient coral reef capital in the Pacific Ocean was the earliest among the islands to be ruled by a single chief.
The discovery makes Nan Madol a key locale for studying how ancient human societies evolved from simple societies to more complex societies, said archaeologist Mark D. McCoy, Southern Methodist University, Dallas. McCoy led the discovery team.

McCoy deployed uranium series dating to determine that when the tomb was built it was one-of-a-kind, making it the first monumental scaled burial site on the remote islands of the Pacific.

The discovery enables archaeologists to study more precisely how societies transform to more and more complex and hierarchical systems, said McCoy, an expert in landscape archaeology and monumental architecture and ideology in the Pacific Islands.

“The kind of society that we live in today, it wasn’t born last year, or even 100 years ago,” McCoy said. “It has its roots in a pre-modern era like Nan Madol where you have a king or chief. These islanders invented a new kind of society – that is a socially creative achievement. The idea of chiefs, someone in charge, is not a new thing, but it’s an extremely important precursor. We know tribes and bands predate chiefdoms and states. But it’s not a straight line. By looking at these intermediate stages we get insight into that social phenomenon.”

The analysis is the first time uranium-thorium series dating, which is significantly more precise than previously used radiocarbon dating, was deployed to calculate the age of the stone buildings that make up the famous site of Nan Madol (pronounced Nehn Muh-DOLL) – the former capital of the island of Pohnpei.

“The thing that makes this case special is Nan Madol happened in isolation, it happened very recently, and we have multiple lines of evidence, including oral histories to support the analysis,” McCoy said. “And because it’s an island we can be much more specific about the natural resources, the population, all the things that are more difficult when people are on a continent and all connected. So we can understand it with a lot more precision.”

Nan Madol, which UNESCO this year named a World Heritage Site, was previously dated as being established in A.D. 1300. McCoy’s team narrowed that to just a 20-year window more than 100 years earlier, from 1180 to 1200.

The finding pushes back even earlier the establishment of the powerful dynasty of Saudeleur chiefs who asserted authority over the island society for more than 1,000 years.

First chief was buried in Pohnpei tomb by AD 1200

An ancient city built atop a coral reef, Nan Madol has been uninhabited for centuries now. Located in the northwestern Pacific on the remote island of Pohnpei, it’s accessible via a 10-hour flight from Hawaii interspersed with short hops from atoll to atoll, including a stop at a U.S. military installation. Nan Madol is the largest archaeological site in Micronesia, a group of islands in the Caroline Archipelago of Oceania.

Uranium dating indicates that by 1180, massive stones were being transported from a volcanic plug on the opposite side of the island for construction of the tomb. And by 1200, the burial vault had its first internment, the island’s chief.

Construction of monumental buildings followed over the next several centuries on other islands not in the Saudeleur Dynasty across Oceania.

McCoy, an associate professor in the SMU Department of Anthropology, and his team reported their discovery in the journal Quaternary Research in “Earliest direct evidence of monument building at the archaeological site of Nan Madol identified using 230Th/U coral dating and geochemical sourcing of megalithic architectural stone.”

An inactive volcano that hasn’t erupted in at least one million years, Pohnpei Island is much larger than its neighboring atolls at 128 square miles (334 square kilometers), making it about the physical size of Columbia, S.C.

Now part of the 607-island nation of the Federated States of Micronesia, Pohnpei Island and its nearby atolls have a population of 34,000.

Pohnpei monument indicates invention of a new kind of society

How Nan Madol was built remains an engineering mystery, much like Egypt’s Pyramids.

“It’s a fair comparison to the Pyramids, because the construction, like the Pyramids, didn’t help anyone – it didn’t help society be fairer, or to grow crops or to provide any social good. It’s just a really big place to put a dead person,” McCoy said.

It’s important to document such things, he said, because this architectural wonder indicates that independently of Egypt, another group of people put effort into building a monument.

“And we think that’s associated with the invention of a new kind of society, a new kind of chiefdom that ruled the entire island,” McCoy said.

Unlike Egypt and the Pyramids however, Nan Madol was invented much more recently in the big story of human prehistory, he said.

“At AD 1200 there are universities in Europe. The Romans had come and gone. The Egyptians had come and gone,” he said. “But when you’re looking at Pohnpei, it’s very recent, so we still have the oral histories of the descendants of the people who built Nan Madol. There’s evidence that you just don’t have elsewhere.”

Pohnpei was originally settled in AD 1 by islanders from the Solomon or Vanuatu island groups. According to local oral history, the Saudeleur Dynasty is estimated to have begun its rule around 1160 by counting back generations from the modern day.
To build the tomb and other structures, naturally formed boulders of basalt, each weighing tons, were somehow transported far from existing quarries on the other side of the island to a lagoon overgrown with mangrove and stretching across 205 acres (83 hectares).

The basalt blocks formed when hot lava cooled and adopted the shape of long, column-shaped boulders and cobbles. Formed from 1 million to 8 million years ago, they came from a number of possible quarry locations on the island.

The city’s stone structures were built atop 98 shallow artificial coral reef islets, each one built by the Saudeleur people. The structures were constructed about three feet above waterline by laying down framing stones, filling the void between them with crushed coral, then laying up double parallel walls and again filling the gap between with crushed coral. The islets are separated by tidal canals and protected from the ocean by 12 sea walls, making Nan Madol what many consider the Venice of the Pacific.

“The structures are very cleverly built,” said McCoy. “We think of coral as precious, but for the architects of Nan Madol it was a building material. They were on a little island surrounded by huge amounts of coral reef that grows really quickly in this environment, so they could paddle out at low tide and mine the coral by smashing some off and breaking it up into rubble.”

The largest and most elaborate architecture in the city is the tomb of the first Saudeleur, measuring 262 feet by 196 feet (80 meters by 60 meters), basically the size of a football field. It is more than 26 feet (8 meters) tall, with exterior walls about six feet to 10 feet (1.8 to 3 meters) thick. A maze of walls and interior walkways, it includes an underground crypt capped with basalt.

“The architecture is meant to be extremely impressive, and it is,” McCoy said. “The structures were built to last — this is one of the rainiest places on earth, so it can be muddy and slippery and wet, but these islets on the coral reef are very stable.”

McCoy and his team used portable X-ray fluorescence (XRF) to geochemically match the columnar-shaped basalt stones to natural sources on the island. The uranium-thorium technique calculates a date based on characteristics of the radioactive isotope thorium-230 and its radioactive parent uranium-234.

That enabled them to determine the construction chronology of a tomb that oral histories identify as the resting place of the first chief to rule the entire island.

“We used an X-ray gun, which looks like a 1950s-styled ray gun,” McCoy said. “It allows you – at a distance and without destroying the thing you’re interested in — to bounce X-rays off it and work out what the chemistry is. The mobile technology has gotten much more affordable, making this kind of study feasible.”

Using uranium series dating on coral emerged in the last decade. Accuracy — superior to radiocarbon – is plus or minus a few years of when the coral died. A very good radiocarbon date only will get within 100 years.

“That’s a monumental shift in terms of the precision with which we talk about things,” McCoy said. “If Nan Madol had not been made of the kind of stone we could source, if the architects hadn’t chosen to use coral, we wouldn’t have been able to get this date. So it’s a happy coincidence that the evidence at the site came together.”

McCoy suggests that future research look at finding the cause for this major turning point on Pohnpei, and what sparked this new hierarchy of rule and monumental building in this society.