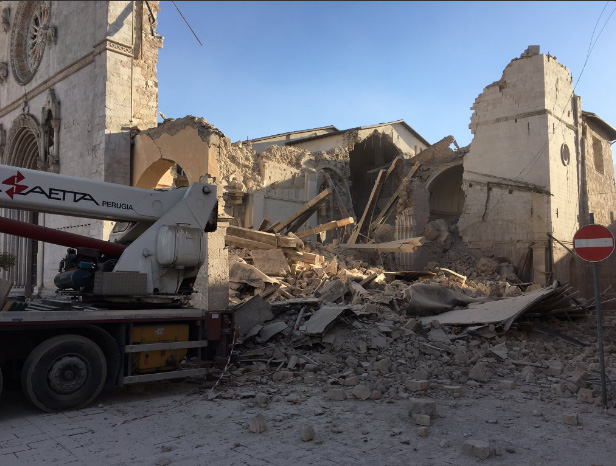 One of the region’s most spiritually important sites

The 6.6 earthquake that struck central Italy on October 30, destroyed a number of churches and historic buildings. Among them was Norcia’s Basilica of San Benedetto.

Only the façade was left standing after the devastating earthquake. Standing at the center of Norcia’s main place, the basilica is located on the ancient Roman birthplace of Sts. Benedict and Scholastica. It was considered one of Cumbria’s most spiritually important sites and attracted 50,000 pilgrims a year.

“La Basilica e crollata”, meaning “the basilica collapsed” the monks of Norcia wrote in a tweet, confirming the church’s destruction.

The first building of the church dates back to 1200, while the façade, the side portal and the lower bell tower date from the late 14th century. In 1570 a portico was added to the right side. On a niche near the transept there is a Madonna with Child, painted by a local painter. The church also contained a large painting, “St Benedict and Totila” by Filippo Napoletano, which was completed in 1621 and a painting by Vincenzo Manetti, “Madonna and Norcia Saints”, from the mid-1600s.