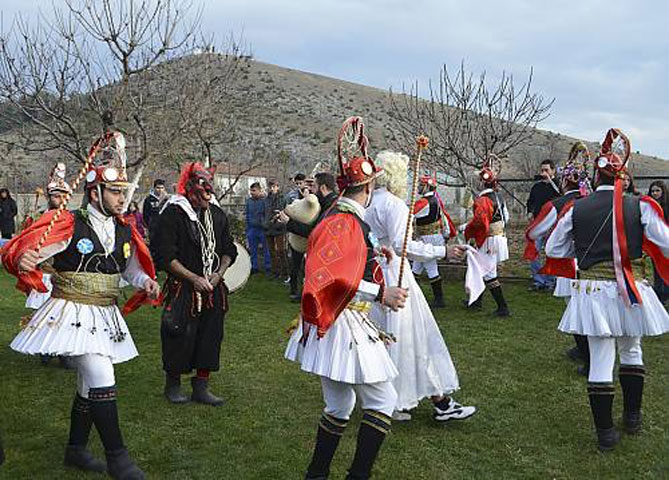 The Momoeria dancers have been inscribed in 2016 on the Representative List of the Intangible Cultural Heritage of Humanity.

Momoeria is a common New Year’s celebration among many Greeks of Pontian (Black Sea) origin. The bearers of the specific Momoeria tradition are eight communities (villages) of Pontian origin in northwestern Greece, in the area of Kozani –West Macedonia Region. They are organized in teams that call themselves “Momoeri”, “Momoeria”, “Momoer’”, “Kochamania”. Each team includes both a dancing and a theatrical group.

Momoeria has been transferred from Matsouka (now Municipality of Maçka), an area of the mountainous Trabzon (Turkey), to northern Greece. Following the Exchange of Populations, according to Lausanne Treaty between Greece and Turkey, in 1923, Christian Greeks from Asia Minor (Anatolia) and Pontos (Black Sea) region had to abandon their homeland and become refugees in Greece. People from the Black Sea region have safeguarded meticulously their heritage and relocated their distinctive cultural elements in Greece. The tradition of Momoeria is particularly vivid in eight villages of Kozani area.

From December 25 to January 5 in Kozani (north-western Greece), dancers, actors and musicians can be seen performing in village streets and visiting people’s homes to celebrate the coming of the new year. The Momoeria dancers, a group made up of 30 male performers, are a special focus. They represent the priests of Momos (god of laughter and satire) or commanders of Alexander the Great wearing helmets, pleated skirts, traditional shoes and brandishing sticks dancing under their leader’s command to convince the powers of nature not to endanger the livelihood of villagers. Actors surround the dancers performing a well-known satirical play featuring characters like an old man and the devil (this can vary among villages) who the audience is invited to tease creating a fun atmopshere. Instruments like the bagpipe play in the background. The practice is mainly to wish the community prosperity in the year ahead, including healthy offspring and good harvests but now also encourages the sustainable management of natural resources. Festivities culminate in the town square with everyone singing and dancing around a fire until morning. Transmitted informally from older to younger generations, it symbolizes part of the community’s cultural identity and helps to build social integration.