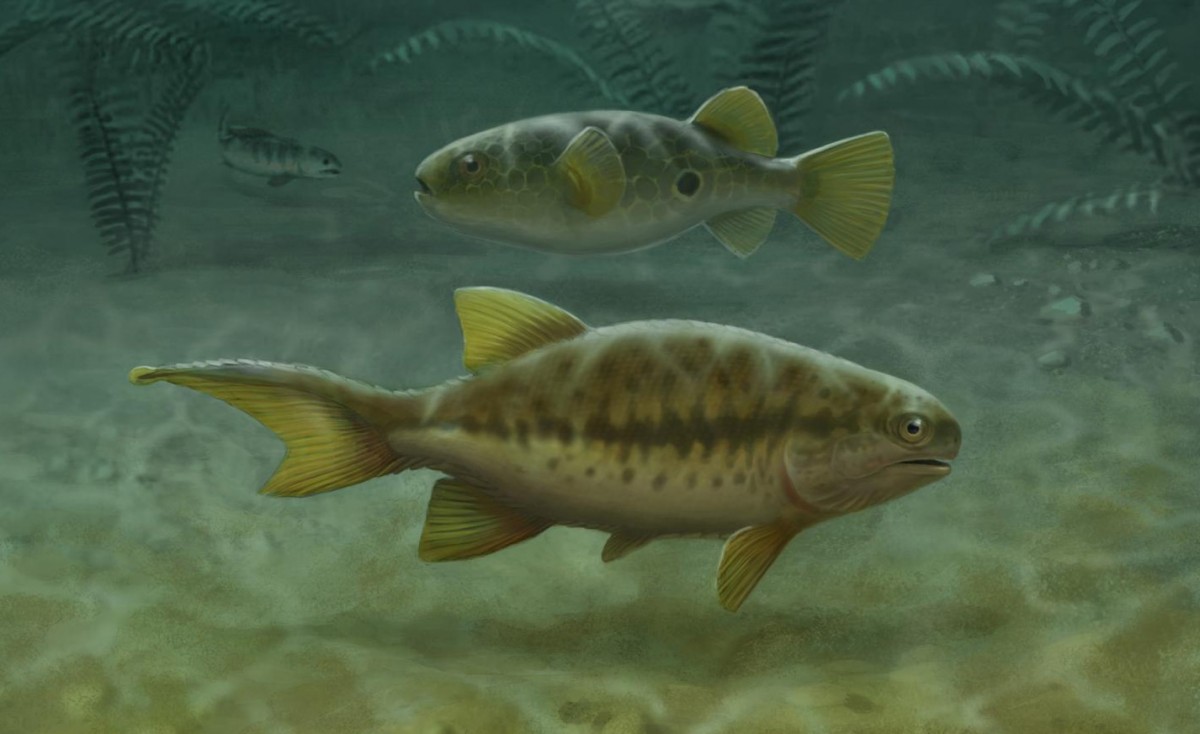 Ancient juvenile fish had both a scaly, fleshy tail and a flexible fin

Despite their obvious physical differences, elephants, lizards and trout all have something in common. They possess elongated, flexible structures at the rear of their bodies that we call tails. But a new study by a University of Pennsylvania paleobiologist reveals that the tails of fish and the tails of tetrapods, or four-limbed animals, are in fact entirely different structures, with different evolutionary histories.

With an analysis of 350-million-year-old fossil fish hatchlings, Lauren Sallan, an assistant professor in the School of Arts & Science’s Department of Earth and Environmental Science, showed that these ancient juvenile fish had both a scaly, fleshy tail and a flexible fin, one sitting atop the other. A similar dual tail structure is seen in the embryos of modern teleosts, a group of ray-finned fish that make up more than 95 percent of living fish species.

Over evolutionary time, to adapt to their environments, adult teleosts and tetrapods each lost one of these tails.

“The tetrapod tail likely started as a limb-like outgrowth in the first vertebrates, while the fish caudal fin started as a co-opted median fin, like the dorsal fin,” Sallan said. “All vertebrate tail diversity might be explained by the relative growth and loss of these two tails, with the remaining fleshy tail stunted in humans as in fishes.”

Sallan reported her findings in the journal Current Biology.

For nearly 200 years, scientists from Darwin contemporary Thomas Henry Huxley to Stephen Jay Gould pointed to the larval stage of modern teleost fish, which have an asymmetrial tail that resembles those of ancient adult ray-finned fish, as a prime example of recapitulation theory, the idea that the growth and development of organisms takes them through stages that mirror the evolutionary steps from simple to more complex organisms.

This example, however, had a notable weakness: a lack of fossils of juvenile fish ancestors. The linchpin for Sallan’s study came in the form of a series of 350-million- year-old fossil specimens of Aetheretmon valentiacum, a fish species related to teleosts. The fossils were recovered from Scotland over decades and stored in museums, but most had never been examined in detail. Unstudied specimens included the smallest known examples of the species — only 3 centimeters long — representing the earliest known stage of development for such fishes. These fossils allowed the first direct comparison between the growth stages of ancient fish and their modern teleost descendants.

Adult Aetheretmon fish possessed an asymmetrical tail, longer on the top than the bottom, which contains vertebrae. A group of modern fish called chondrosteans, which includes species such as sturgeon and paddlefish, are sometime referred to as “living fossils” and have a similar tail structure. Adult teleost tails, on the other hand, are nearly symmetrical and comprised entirely of fin.

According to recapitulation theory, juvenile Aetheretmon would have appeared to be smaller versions of the adults, exhibiting what is called direct development. Sallan’s observations found that this was not the case. The juvenile Aetheretmon in fact closely resembled modern teleost juveniles; both have a small fleshy tail containing vertebrae, similar to a lizard’s tail, overlaying a fin. As they matured, the upper tail of Aetheretmon continued to extend. In contrast, the upper portion of the tail of modern teleosts’ is stunted early and so ends up embedded in the growing body, their caudal fin instead becoming their only “tail.”

Sallan examined the tail forms of a variety of different species of fish, living and extinct, at different developmental stages, and found the same two-part structure, differently arranged, in each.

“What this shows is that ancient fish and modern fish had the same developmental starting point that has been shared over 350 million years,” said Sallan. “It’s not the ancestral tail showing up in modern teleost larvae; it’s that all fish have two different structures to their tail that have been adjusted over time based on function and ecology for all of these species.”

The analysis allows for new insights to be drawn not only about fish evolution but the evolution of vertebrates in general, as the bony, fish-like ancestors of Aetheretmon, living fishes and land-dwelling tetrapods likely had both types of tail. The vertebrae-containing tail present in Aethretmon likely represents the first limb-like growth that became the true tails in animals like lizards.

Sallan said it’s likely that the two outgrowths are governed by two different groups of genes and thus could have been subject to natural selection independently, generating large numbers of innovative forms throughout evolution.

“It tells us why we have all this diversity in fins and limbs in past and present,” Sallan said. “There might have been some lineages that favored one form over another for functional or ecological reasons. If a fish couldn’t adapt this trait, which is so vital for swimming, they might have gone extinct.”

Sallan is excited by the possibility that these findings could be evaluated by a developmental biologist to confirm the molecular pathways that generate limb outgrowth or fin placement.

“This would be an easy way of testing evolution in the lab,” she said.