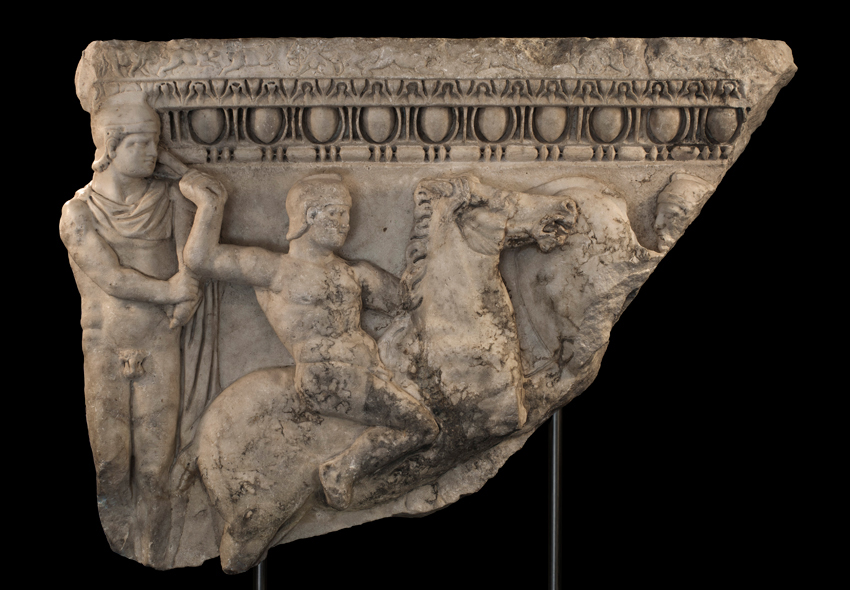 According to Christos Tsirogiannis (University of Oxford)

“Archaeologist and researcher of the University of Oxford Christos Tsirogiannis has made a most precious New Year’s gift to Greece,” remarks Angeliki Kotti in an article published in the Greek newspaper “Ethnos”.

According to the article, “Dr Christos Tsirogiannis (University of Oxford) discovered that a big section of a marvelous Roman sarcophagus, which was illegally exported from Greece, is offered for sale by an art gallery in New York. The ancient marble artefact was registered  in the archive of the notorious Italian antiquities dealer Gianfranco Becchina, in 1998. Dr Tsirogiannis has informed the Department of Illicit Antiquities Trade of the Hellenic police.

“The section of the marble sarcophagus is depicting a scene from the Trojan War. The artefact was located at the Royal-Athena Galleries, founded and directed by Jerome Eisenberg. According to Dr. Tsirogiannis it also appears on four Polaroids and it is mentioned in three hand-written notes, all coming from the Becchina archive, which was confiscated by Italian and Swiss authorities in 2001.

“As Dr Tsirogiannis notes ‘Gianfranco Becchina has already been convicted, not only in Italy but also in Greece, for the receiving and trading of stolen works of art (antiquities), while dozens of antiquities whose images can be found in his archive have been identified and repatriated to Italy and Greece (for instance, the golden Macedonian wreath that was repatriated from the Getty Museum in 2007, or the marble head of Hermes, repatriated in 2015)’. Other repatriations are pending, based on identifications made by the archaeologist and researcher from the University of Oxford.

“The Royal-Athena Galleries of New York have been involved in the selling of vases coming from the big theft of the Corinth Museum in 1990, and other antiquities, almost all of which were eventually repatriated to Greece or to Italy.

“The first photograph with the section of the marble Roman sarcophagus was in a file related to dealings he had with a Greek looter who is now dead and is mentioned as ΖE or ΖENE. In a separate note Becchina has written that he has received the piece, among other artefacts, on May 25, 1988, paying 60,000 Swiss francs for it.

“Another note reveals that Becchina had purchased antiquities from ZENE between November 1986 and October 1988, for a total amount of over 250,000 US dollars.

“Another Polaroid with the same artefact is glued on a white page, among pictures of other antiquities that “ZENE” had exported illegally from Greece to Becchina. This page is entitled “PF”, meaning that these antiquities (including the sarcophagus’ section) had been kept by Becchina in the storerooms that he held in Port Franc of Basel.

“Finally, there is another hand-written note of Becchina, by which he asks Andre Lorenceau, one of the conservators he was collaborating with for the cleaning of the antiquities before these were channeled to the international trade, to clean the sarcophagus section and to attach a base to it, by drilling a hole into it.

“According to the description of the object by the Royal-Athena Galleries, given by Dr. Guntram Koch (a specialist in Roman sarcophagi): “A similar sarcophagus featuring a battle between Greeks and Amazons, is in the Thessalonika Museum (Bianchi Bandinelli, Rome, the Late Empire, 1971, fig. 277-278, p. 300). Our piece is probably from the same workshop. Other related reliefs may be found in the British Museum, the Museé du Louvre, and the Istanbul Archeology Museum”.

“Apart from the Hellenic police, Dr. Tsirogiannis has informed Interpol and the special prosecutor of New York in charge of illicit antiquities trade cases”.