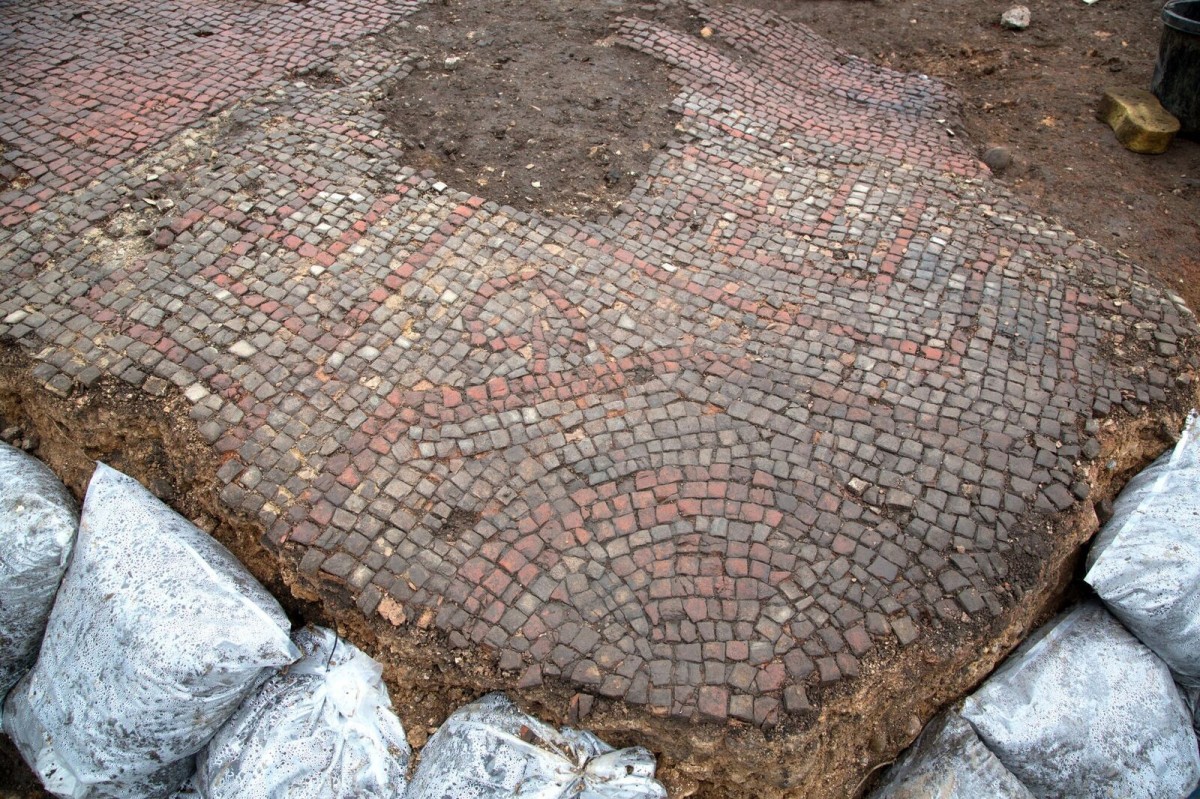 Roman house with ornate mosaic and hypocaust discovered in Leicester

Evidence of good living over 1,500 years ago

The team from the University of Leicester is currently excavating a large site on the corner of Highcross Street and Vaughan Way, next to Leicester’s John Lewis car park. The project, which has been running since November 2016, is uncovering exciting new evidence for Leicester’s Roman past, including evidence for a Roman street, and a Roman house once floored with mosaic pavements.

The excavation is funded by Ingleby, who will be developing the site into apartments, and the team from University of Leicester Archaeological Services (ULAS) is working closely with the architects to minimise the impact of the new building on the underlying archaeology. Modern rubble and Victorian garden soil are being removed from the footprint of the proposed building to expose the medieval and Roman archaeology. This allows archaeologists to identify where the footings for the new building will have an adverse effect on important archaeological remains, which can then either be designed around, or excavated before they are destroyed, leaving most of the archaeology preserved intact beneath the new building.

The excavation covers nearly two-thirds of a Roman insula (city block), giving archaeologists an amazing opportunity to investigate life in the north-east quarter of the Roman town. So far, a Roman street and three Roman buildings have been identified.

Today, Highcross Street still follows the line of the main road leading from the Roman forum (beneath Jubilee Square) to the north gate, at the junction with Sanvey Gate. On this western side of the site a large Roman building has been uncovered. Two ranges of rooms flanked by a corridor or portico appear to surround a courtyard. At least one room had a hypocaust (underfloor heating), and it is likely that this is a large townhouse, reminiscent of the Vine Street courtyard house excavated nearby, beneath the John Lewis car park, in 2006.

North of this building, running east to west across the northern edge of the site, close to All Saints’ Church, a cambered gravel street has been recorded. Activity along this street appears to have been quiet during the Roman period. Roadside ditches and boundary walls have been identified, but no substantial buildings are present. Instead, activity seems to be more ephemeral in natured, gardens and yards, probably with some timber buildings. Evidence for copper working has been found in the area, perhaps suggesting commercial or industrial activity taking place along the street.

On the eastern side the site, close to the John Lewis car park, a second Roman house has been found. There is evidence for mosaic floors in at least three of its rooms, and one of the mosaic fragments, measuring some 2m by 3m (about a quarter of the original floor) is one of the largest pieces of mosaic pavement found in Leicester in the last 30 years.

Mathew Morris, site director for ULAS, said: “The mosaic is fantastic, it’s been a long time since we’ve found a large, well-preserved mosaic in Leicester. Stylistically, we believe it dates to the early fourth century AD. It would have originally been in a square room in the house. It has a thick border of red tiles surrounding a central square of grey tiles. Picked out in red in the grey square are several decorations, including a geometric border, foliage and a central hexafoil cross. The intricate geometric border follows a pattern known as ‘swastika-meander’. The swastika is an ancient symbol found in most world cultures, and it is a common geometrical motif in Roman mosaics, created by laying out the pattern on a repeating grid of 4 by 4 squares. As part of the project, our plan is to lift and conserve it for future display.”

More curious, however, is a third small Roman building found in the centre of the site. It has a large sunken room or cellar, and it possibly has a small apse (semi-circular niche) attached to one side. Currently, the building has no obvious purpose, but sunken rooms are relatively unusual in the Roman period.

Mathew Morris added: “At the moment there is a lot of speculation about what this building might be. It could be a large hypocaust but we are still investigating. It seems to be tucked away in yards and gardens in the middle of the insula, giving it privacy away from the surrounding streets; and the possible apse is only really big enough to house something like a statue, which makes us wonder if it is something special like a shrine.”

Archaeologists will be onsite through February as they investigate the Highcross Street frontage. In the medieval period, the site was occupied by St Johns’ Hospital, Leicester earliest hospital founded in the twelfth century, and the town goal, and it is hoped that evidence for both important medieval buildings will found.