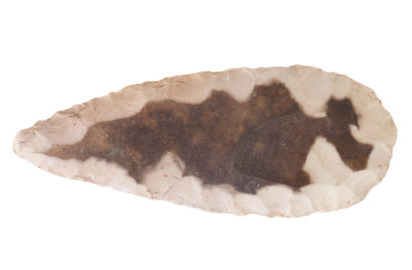 How can culture create bursts of innovation?

Something odd happened in the transition from the Middle to the Upper Paleolithic, around 50,000 years ago. Modern humans and their immediate ancestors had been using tools for a few million years prior, but the repertoire was limited. Then, all of sudden, there was an explosion of new tools, art and other cultural artifacts.

What caused that change has been the subject of much debate. Maybe brainpower reached a critical threshold. Maybe climate change forced our prehistoric kin to innovate or die. Maybe it was aliens.

Or maybe it was the result of populations growing and spreading throughout the land, Stanford researchers write in Royal Society Interface. That certainly could explain some other curious features of Paleolithic culture – and it could mean that a number of paleontologists’ inferences about our genetic and environmental past are, if not wrong, not as well supported as they had thought.

“One captivating observation is if you look at the archaeological record, it seems to be highly punctuated” leading up to the Upper Paleolithic, said Oren Kolodny, a postdoctoral fellow in the lab of Marcus Feldman, a professor of biology. In other words, Kolodny said, the Paleolithic was a time marked by periods of slow change separated by bursts of cultural innovation.

“Those cultural bursts have been taken as evidence of an external change,” such as genetic or environmental shifts, said Nicole Creanza, who led the study with Kolodny while a postdoctoral fellow in Feldman’s lab. “But to some extent, Oren, Marc and I felt that the simplest explanation could be that culture itself is capable of behaving in a punctuated fashion,” said Creanza, who is now an assistant professor of biological sciences at Vanderbilt University.

A search for something simpler

The researchers wondered, how could culture create these bursts of innovation?

In a 2015 paper, Kolodny, Creanza and Feldman, who is also co-director of Stanford’s Center for Computational, Evolutionary and Human Genomics, argued that human culture could have evolved through several distinct kinds of advance. First, some ideas emerge as “lucky leaps,” Kolodny said – perhaps an early human witnessed a mouse get trapped in a tangle of grass, and the hunting net was born. Other ideas could emerge either as extensions of those leaps or as combinations of other ideas or technologies. Finally, groups can also lose ideas, as prehistoric Tasmanians did when they lost, incredibly, the knowledge of how to fish, Kolodny said.

Aided by computer simulations, the team showed that combining the three kinds of advance could have led directly to bursts of innovation, as seen in the archaeological record. They also found that at the point where new ideas balance out with lost ones, the number of ideas a population can support increases dramatically with population size. A population twice the size, Kolodny, Creanza and Feldman’s model predicted, could support much more than twice the number of ideas.

Migration and other game changers

In their latest paper, Creanza, Kolodny and Feldman, who is also the Burnet C. and Mildred Finley Wohlford Professor in the School of Humanities and Sciences, combined those conclusions with two new components. First, they considered migrations between otherwise distinct populations and assumed that such travel is more likely in larger populations. Second, they studied what would happen if certain major innovations, such as domesticating plants or developing hunting knives, helped grow the population.

The updated model made a number of predictions that at least qualitatively resemble what archaeologists know about cultural evolution in the Paleolithic.

Innovations that encouraged population growth, however, can have lasting effects, since even slight increases in population size can support a disproportionate increase in innovation.

Migration can do something similar. As travel increases, it bridges societies, allowing for an exchange of ideas that creates a complex of interrelated cultures. And as travel becomes common, smaller groups effectively merge into one large population, with vastly more capacity for innovation. In fact, that can create a feedback loop: populations grow, contact with others increases, innovation results and populations grow even more.

Were Neanderthals less fit, or just fewer in number?

Those theoretical conclusions could help explain a number of puzzles in human history, such as the disappearance of Neanderthals long ago. “People tend to assume modern humans were better and replaced them,” Kolodny said, but how they were better remains unclear. A simpler explanation may lie in two observations: Neanderthals had roughly a third the population of other early humans, and migration was always out of Africa, not into it.

In that case, modern humans migrating from Africa might have brought with them a more advanced repertoire of technologies, due in part to their larger population, and Neanderthals just could not keep up.

“We don’t think that whenever we get a qualitative pattern that looks like the archaeological record, this is what necessarily happened,” Kolodny said. “But it is a proof of concept that it could have happened this way.”

Just as important, Creanza says, the results show that researchers cannot use cultural bursts as evidence of external changes – that is, just because our culture advanced 50,000 years ago, that does not imply our brains got bigger, the landscape changed or anything else. It might just be the way culture is.