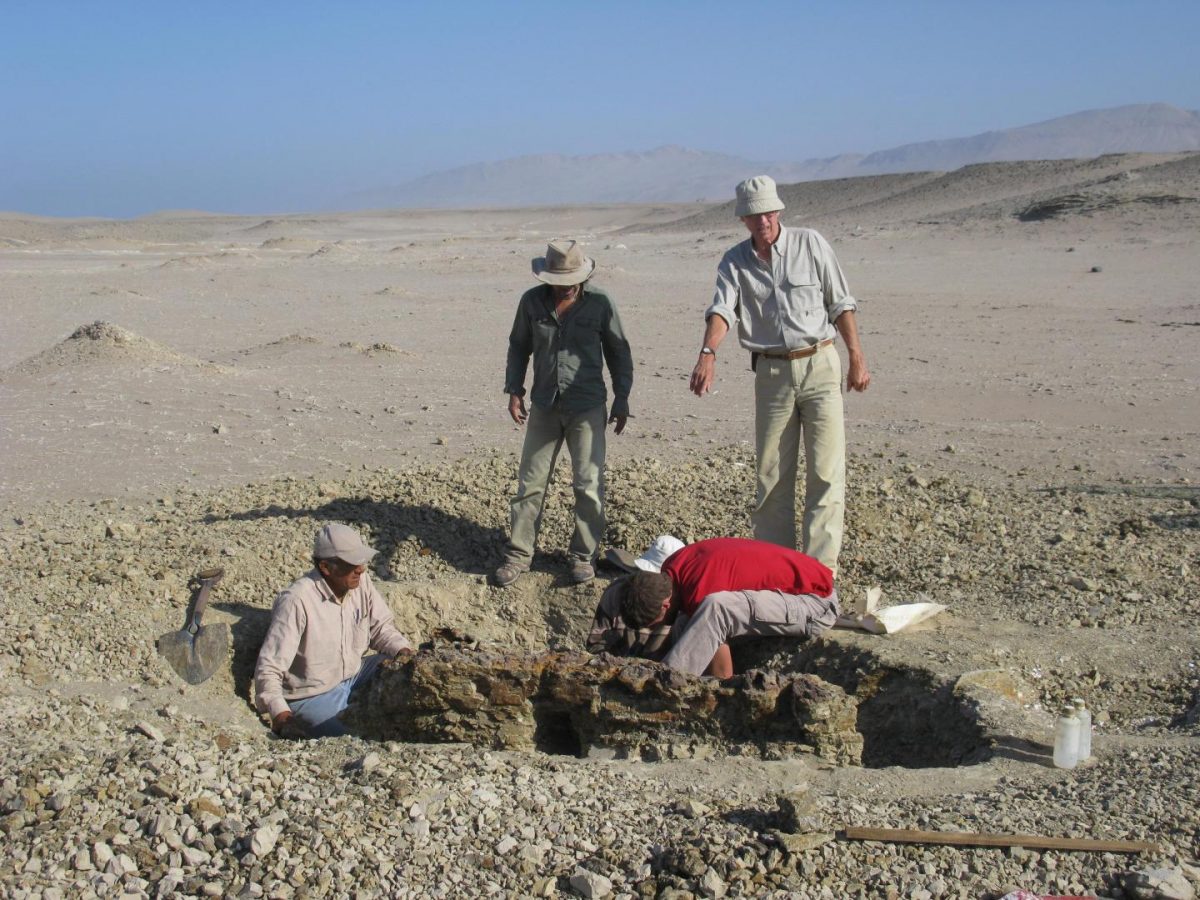 An analysis of a 36.4-million-year-old whale fossil suggests that before baleen whales lost their teeth, they were suction feeders that most likely dove down and sucked prey into their large mouths. The study published on May 11 in Current Biology also shows that whales most likely lost the hind limbs that stuck out from their bodies more recently than previously estimated.

The specimen, which researchers unearthed in the Pisco Basin in southern Peru, is the oldest known member of the mysticete group, which includes the blue whale, the humpback whale, and the right whale. At 3.75-4 meters long, this late Eocene animal was smaller than any of its living relatives, but the most important difference was in the skull. Modern mysticetes have keratin fibers–called baleen–in place of teeth that allow them to trap and feed on tiny marine animals such as shrimp. However, the newly described whale has teeth, so the paleontologists dubbed it Mystacodon, meaning “toothed mysticete”.

“This find by our Peruvian colleague Mario Urbina fills a major gap in the history of the group, and it provides clues about the ecology of early mysticetes,” says paleontologist and study co-author Olivier Lambert of the Royal Belgian Institute of Natural Sciences. “For example, this early mysticete retains teeth, and from what we observed of its skull, we think that it displays an early specialization for suction feeding and maybe for bottom feeding.”

Mystacodon’s teeth exhibit a pattern of wear that differs from more archaic whales, the basilosaurids. Many basilosaurids were probably active hunters, similar to modern orcas, with mouths that were suited for biting and attacking, but Mystacodon has a mouth more suited for sucking in smaller animals, leading the researchers to conclude that Mystacodon most likely represents an intermediate step between raptorial and filter feeding and between the ancient basilosaurids and modern mysticetes.

“For a long time, Creationists took the evolution of whales as a favorite target to say that, ‘Well, you say that whales come from a terrestrial ancestor, but you can’t prove it. You can’t show the intermediary steps in this evolution,’” says Lambert. “And that was true, maybe thirty years ago. But now, with more teams working on the subject, we have a far more convincing scenario.”

Mystacodon bolsters that argument by displaying features of both basilosaurids and mysticetes. “It perfectly matches what we would have expected as an intermediary step between ancestral basilosaurids and more derived mysticetes,” says Lambert. “This nicely demonstrates the predictive power of the theory of evolution.”

Lambert and his colleagues think that Mystacodon may have started suction feeding in response to ecological changes. In illustrated reconstructions, Mystacodon is depicted diving down to the sea floor in a shallow cove, but based on this initial analysis, the researchers aren’t sure to which extent Mystacodon was adapted to bottom feeding. “We will look inside the bone to see if we can find some changes that may be correlated with this specialized behavior,” says Lambert. “Among marine mammals, when a slow-swimming animal is living close to the sea floor, generally the bone is much more compact, and this is something we want to test with these early mysticetes.”

The fossil’s pelvis offered another surprise: Mystacodon had fully articulated, tiny vestigial hind limbs that would have stuck out away from the whale’s body. Previously, paleontologists had thought that whales lost the hip articulation during the basilosaurid phase of their evolution, before baleen whales and modern toothed whales diverged. Though Mystacodon‘s hind limbs were already tiny and well down the path toward being vestigial and useless, their articulation with the pelvis suggests that mysticetes and modern toothed whales may have lost this feature independently.

“For a long time, our comprehension of whale evolutionary history was hampered by the fact that most paleontologists were searching for bones relatively close to home, in Europe and North America,” Lambert says. “However, key steps in whales’ evolution happened in areas now occupied by India, Pakistan, Peru, and even Antarctica.” Lambert and his colleagues plan to return to the excavation site in Peru to see if they can find more whale fossils from different epochs.