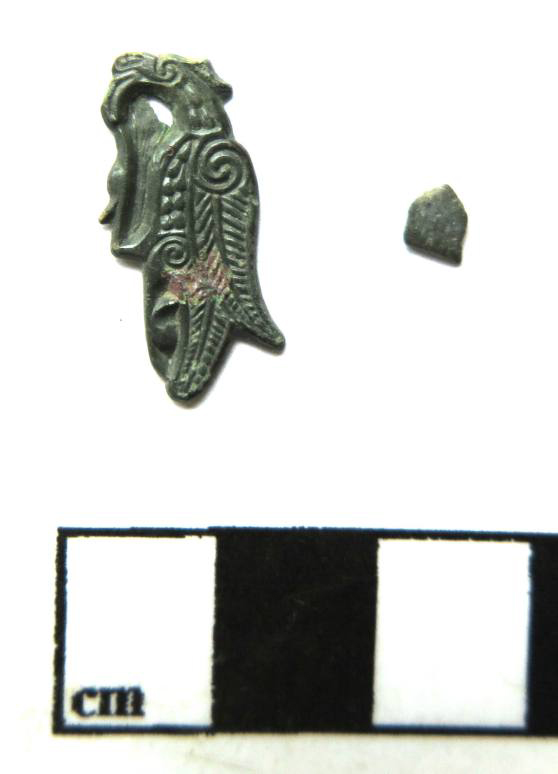 Near the end of last summer’s excavation season a marvellous new find of national significance was discovered at Bamburgh Castle; a beautifully decorated copper alloy bird mount. The decorated fragment is small, 23mm by 12mm, but decorated with an intricate zoomorphic representation of a bird, characteristic of early medieval North European art. The star find has since been undergoing careful conservation to reveal an intricately decorated artefact that is a window into the art of a lost era of early medieval royal society.

Initial comments from a number of experts has suggested that the bird mount is unique, with no direct parallels and likely to be 8th century in date. It is fascinating that the new image appears to hark back in time to the bird of prey motifs of the 6th and 7th centuries AD and could represent a descendant of these earlier styles just as “the later 8th century York helmet, is an update of the form known from the earlier Sutton Hoo, Staffordshire and Wollaston helmets”.

The find, excavated by Harry Francis, was recovered from a cobbled surface revealed at the base of a narrow trench that was excavated to identify the next occupation surface at the southern part of Trench 3.  This was revealed as a well constructed surface just centimetres below the well dated 9th century metal working building. At this time there were a number of smaller kingdoms and Northumbria was one of these. The palace fortress of Bamburgh was one of the most important places in Northumbria at that time and we have evidence of metal working, probably associated with the production of arms and armour for the warriors of the royal court in our excavation. In summer 2017 we will continue our investigations of the find spot and we hope to discover if it represents an earlier period of metal working or some other activity. At the moment our investigation of this horizon is at such an early stage we are unsure if the find came from within a building or from a yard surface or path where it may have been dropped. We are very much looking forward to getting back on site and continuing our excavations.

Francis Armstrong and his son Will, owners of Bamburgh Castle have commented that “the Bird is a spectacular discovery. It is a beautiful artefact and we are proud that it has been found here at Bamburgh. Finds like this help us to connect with the Castle’s history and it is wonderful when we get the opportunity to display these ancient wonders so our visitors can enjoy them close up. We are grateful for the work the BRP do here at the Castle and we have a great time working with them unearthing the stories that Bamburgh Castle has to tell”.

Research into the new find is ongoing and the research team aims to have a short publication ready later this year. The bird will be on display at the castle, open 10.00am to 5pm until 29th October, with many other fascinating finds including pattern welded swords and intricately decorated gold work. Visitors of the castle can also chat to the archaeologists on site between June 11th and July 15th.