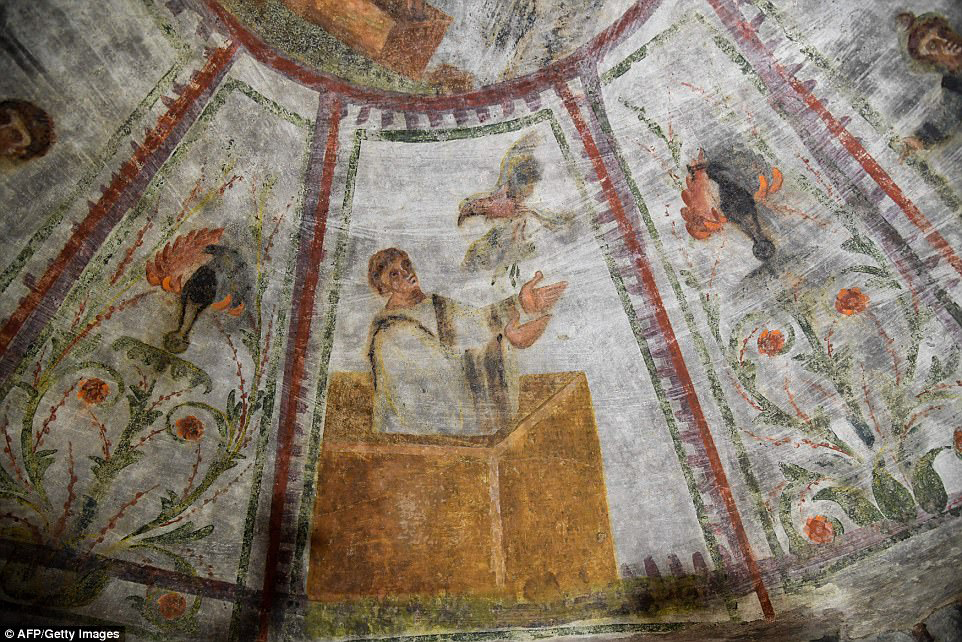 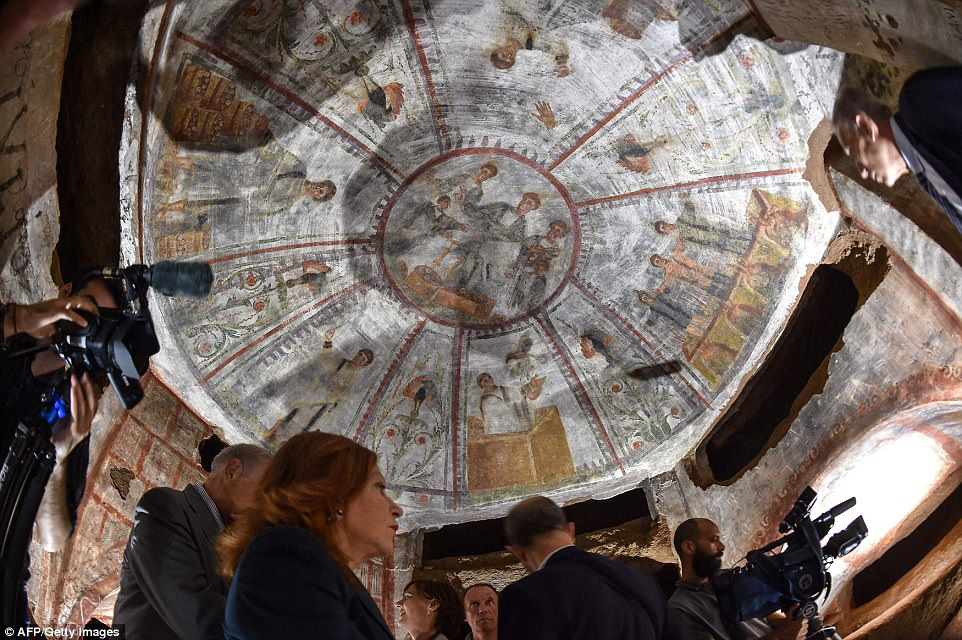 A seven-year restoration of two underground burial rooms at the Catacombs of Domitilla, has been completed on Tuesday. Using laser technology, the restorers were able to uncover hidden frescoes, which had been commissioned 1,600 years ago, to commemorate the city’s early Christians.

The new finds shed light to the passage from paganism to Christianity. “These tombs represent the roots of our deepest identity, the roots of Rome and of Christianity,” Cardinal Gianfranco Ravasi, head of the pontifical commission, said at a news conference Tuesday.

A chalky deposit and algae had covered the two frescoes. Smoke from oil lamps had darkened the surfaces. The deposits and the dirt were burned away by laser instruments, and the scenes depicting Olad and New Testament figures gradually emerged.

“When we started work, you couldn’t see anything – it was totally black. Different wavelengths and chromatic selection enabled us to burn away the black disfiguration without touching the colours beneath,” said Barbara Mazzei, who headed the project. “Until recently, we weren’t able to carry out this sort of restoration – if we had done it manually we would have risked destroying the frescoes,” she added.

The first area that was restored dates back to the 3rd century. Here we find many references to pagan art, such as grape vines or cupids.

As Phys.org reports: “Many of the crypts have frescoes that seem blotted out. In fact, they were stripped by ‘ripping,’ when catacombs were looted and frescoes cut out and removed as trophies in the Middle Ages. This ancient form of art theft can be found in a museum in Catania, which displays examples that were originally brought to Sicily by a nobleman to decorate his home”.

The first area also includes two biblical scenes, Daniel and the lions, and Noah with his ark, as well as a number of frescoes depicting Christ and the apostles.

The second area was named the “room of the bakers.” According to the New York Times, the frescoes of this area had been commissioned by the city’s bakers. The scenes depict Christ and the Apostles and scenes from the life of a baker. These frescoes not only shed light to everyday life in Rome, but also manifest the importance of bread in both Christian and pagan symbolism.

“These works show the difficult path the Romans walked on the way to their new faith,” said Monsignor Giovanni Carru of the Pontifical Commission of Sacred Art.

The new area also includes a small museum, due to open to the public by the end of June in which statues, parts of sarcophagi and other artifacts from the tombs are displayed.

The Catacombs of Domitilla are spread over 17 kilometers  of underground caves, some of which are inaccessible. They are laid out on four levels – one on top of another.

The Catacombs were discovered in 1593 by archaeologist Antonio Bosio. He almost got lost in the labyrinth of galleries and wrote of his fear of dying there and of contaminating the sacred place with his own “unworthy” corpse. At that time, Bosio believed he was in a part of the vast catacomb of St Calixtus. It was only in the last century that G.B. de Rossi, founder of Christian archeology, understood this was really the catacomb of St Domitilla and the sanctuary of the martyrs Nereus and Achilleus. Subsequent excavations have brought more than 26,000 tombs to light.