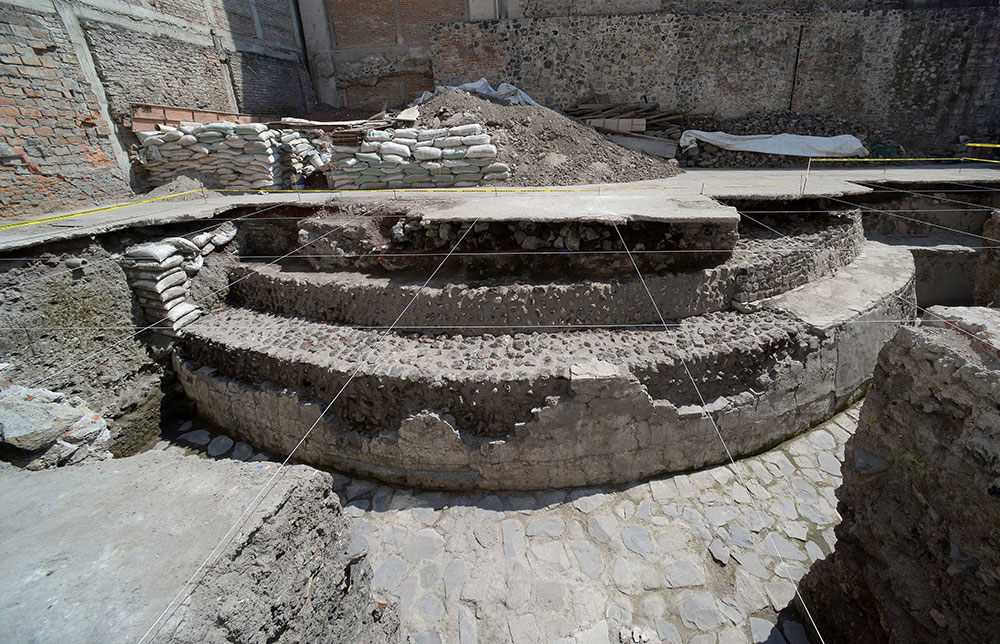 Dedicated to a wind god

Archaeologists have announced the discovery of a large circular temple, dedicated to the Aztec wind god Ehecatl-Quetzalcoatlin.

The remains were uncovered behind the city’s colonial-era Roman Catholic Cathedral in the heart of Mexico City.

The temple was built between 1486-1502 during the reign of the Aztec Emper Ahuizotl, predecessor of the famed Moctezuma II, whom Hernan Cortes defeated during the conquest of Mexico by Spanish conquistadors.

Aztec archaeologist Eduardo Matos said “the top of the temple was likely built to resemble a coiled snake, with priests entering though a doorway made to look like a serpent’s nose.”

The deity Ehecatl-Quetzalcoatlin often appears as a feathered Serpent (Quetzalcoatl in Aztec and other Nahua cultures) and as a god of wind, and is therefore also known as Ehecatl-Quetzalcoatl. Ehecatl also figures prominently as one of the creator gods and culture heroes in the mythical creation accounts documented for pre-Columbian central Mexican cultures.

Only part of the ball court has survived, comprising of a staircase and section of a spectator stand. Estimates place the court at around 50 meters (165 feet) long.

Ball games have been an important part of ritual association in Mesoamerica since 1400BC. The Aztec game, called ōllamaliztli was witnessed by Spaniards in the sixteenth-century who said that points were lost by a player who let the ball bounce more than twice before returning it to the other team, who let the ball go outside the boundaries of the court, or who tried and failed to pass the ball through one of the stone rings placed on each wall along the center line.

According to the 16th century Aztec chronicler Motolinia, points were gained if the ball hit the opposite end wall, while the decisive victory was reserved for the team that put the ball through a ring. However, placing the ball through the ring was a rare event—the rings at Chichen Itza, for example, were set 6 meters off the playing field—and most games were likely won on points.

“It was an offering associated with the ball game, just off the stairway,” said archaeologist Raul Barrera. “The vertebrae, or necks, surely came from victims who were sacrificed or decapitated.”