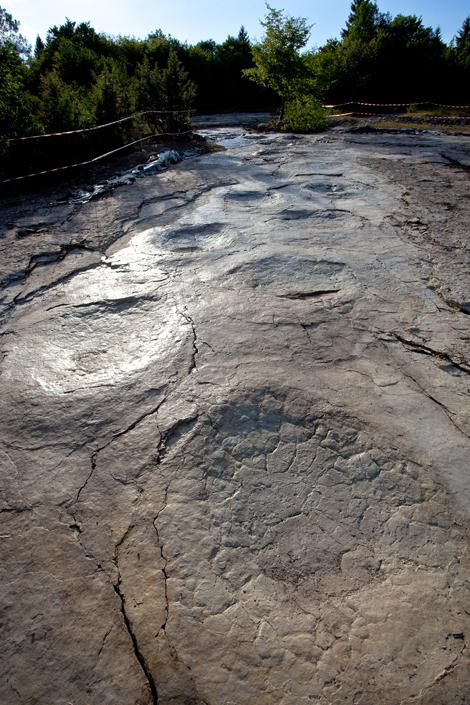 In the French village of Plagne, in the Jura Mountains

In 2009, the world’s largest dinosaur tracks were discovered in the French village of Plagne, in the Jura Mountains. Since then, a series of excavations at the site has uncovered other tracks, sprawling over more than 150 meters. They form the longest sauropod trackway ever to be found. Having compiled and analyzed the collected data, which is published in Geobios, scientists from the Laboratoire de Géologie de Lyon (CNRS / ENS de Lyon / Claude Bernard Lyon 1 University), the Laboratoire Magmas et Volcans (CNRS / Université Clermont Auvergne / Université Jean Monnet / IRD), and the Pterosaur Beach Museum conclude these tracks were left 150 million years ago by a dinosaur at least 35 m long and weighing no less than 35 t.

In 2009, when sauropod tracks were discovered in the French village of Plagne—near Lyon—the news went round the world. After two members of the Oyonnax Naturalists’ Society spotted them, scientists from the Paléoenvironnements et Paléobiosphère research unit (CNRS / Claude Bernard Lyon 1 University) confirmed these tracks were the longest in the world.

Between 2010 and 2012, researchers from the Laboratoire de Géologie de Lyon supervised digs at the site, a meadow covering three hectares. Their work unearthed many more dinosaur footprints and trackways. It turns out the prints found in 2009 are part of a 110-step trackway that extends over 155 m—a world record for sauropods, which were the largest of the dinosaurs.

Dating of the limestone layers reveals that the trackway was formed 150 million years ago, during the Early Tithonian Age of the Jurassic Period. At that time, the Plagne site lay on a vast carbonate platform bathed in a warm, shallow sea. The presence of large dinosaurs indicates the region must have been studded with many islands that offered enough vegetation to sustain the animals. Land bridges emerged when the sea level lowered, connecting the islands and allowing the giant vertebrates to migrate from dry land in the Rhenish Massif.

Additional excavations conducted as late as 2015 enabled closer study of the tracks. Those left by the sauropod’s feet span 94 to 103 cm and the total length can reach up to 3 meters when including the mud ring displaced by each step. The footprints reveal five elliptical toe marks, while the handprints are characterized by five circular finger marks arranged in an arc. Biometric analyses suggest the dinosaur was at least 35 m long, weighted between 35 and 40 t, had an average stride of 2.80 m, and traveled at a speed of 4 km/h. It has been assigned to a new ichnospecies(1): Brontopodus plagnensis. Other dinosaur trackways can be found at the Plagne site, including a series of 18 tracks extending over 38 m, left by a carnivore of the ichnogenus Megalosauripus. The researchers have since covered these tracks to protect them from the elements. But many more remain to be found and studied in Plagne.

(1) The prefix ichno- indicates that a taxon (e.g., a genus or species) has been defined on the basis of tracks or other marks left behind, rather than anatomical remains like bones.