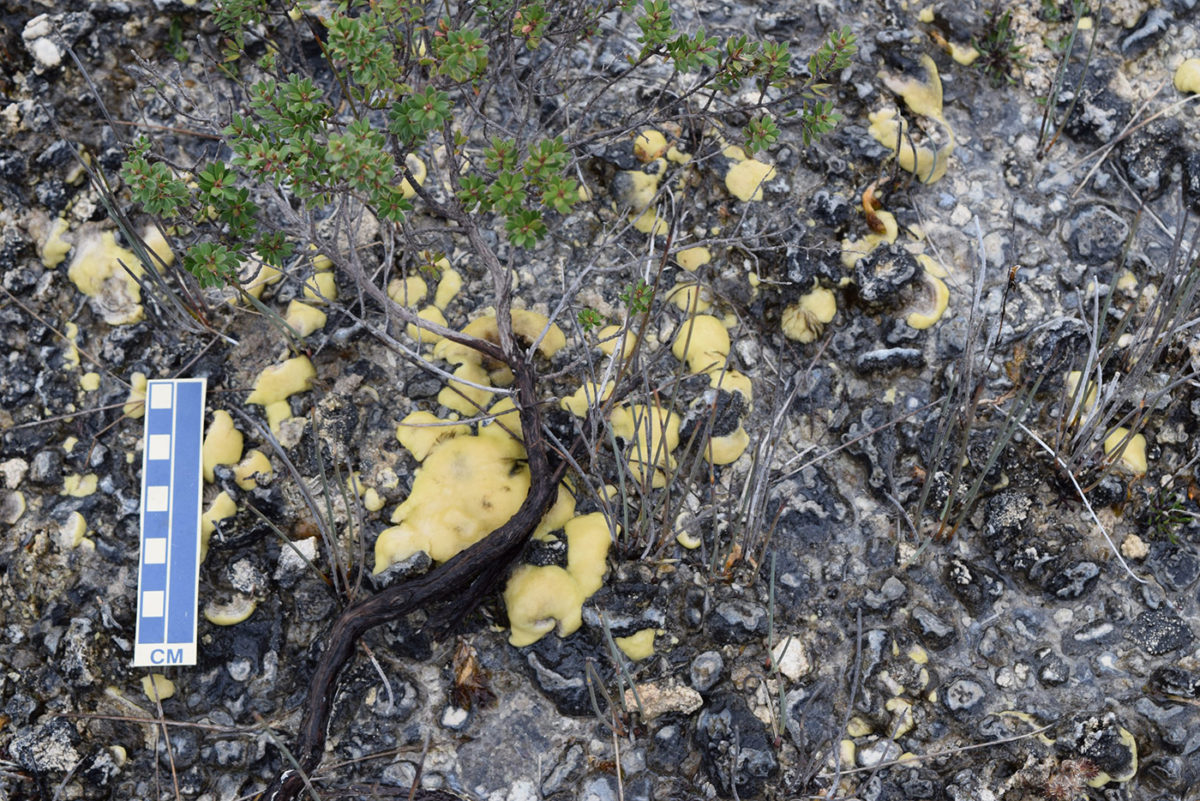 Revealing a unique and unexpected ecosystem

The researchers from the Department of Primary Industries, Parks, Water & Environment (DPIPWE) and the University of Tasmania made the discovery during a survey of peat-bound karstic wetlands – an unusual type of swamp which occurs only in peaty soils underlain by limestone and similar carbonate rocks.

Dr Bernadette Proemse from the University says this is an exciting discovery, because living stromatolites were previously unknown from Tasmania.

“The discovery reveals a unique and unexpected ecosystem in a remote valley in the state’s south west,” Dr Proemse said.

“The ecosystem has developed around spring mounds where mineral-rich groundwater is forced to the surface by geological structures in underlying limestone rocks. The find has proved doubly interesting, because closer examination revealed that these spring mounds were partly built of living stromatolites.”

“Stromatolites are laminated structures of micro-organisms which have created layers of minerals using elements dissolved in the water in which they live. Fossil stromatolites are the oldest evidence for life on Earth – they first appeared 3.7 billion years ago!”

Roland Eberhard from DPIPWE’s Natural and Cultural Heritage Division said stromatolites are rare, because more advanced life forms such as aquatic snails feed on the micro-organisms required to form them.

“The discovery of living stromatolites in Tasmania is highly significant because stromatolites are rare globally and not previously known from Tasmania except as ancient fossils,” Mr Eberhard said.

“DNA analysis indicates that the Tasmanian stromatolites are micro-organism communities which differ from all other known stromatolites.”

The discovery provides clues why stromatolites thrived for millions of years but then virtually disappeared from all but a few exceptional places on earth.

The researchers believe that the highly mineralised water flowing from spring mounds is a critical factor in the ability of the stromatolites to survive in the Tasmanian wilderness, because it challenges other forms of life.

This became obvious when the researchers noticed that the mounds were littered with the shells of dead freshwater snails.

“This is good for stromatolites because it means there are very few living snails to eat them. Fortuitously, these Tasmanian ‘living fossils’ are protected by the World Heritage Area and the sheer remoteness of the spring mounds,” Dr Proemse said.

Further surveys are planned to assess whether spring mounds and stromatolites occur at other sites in the World Heritage Area.