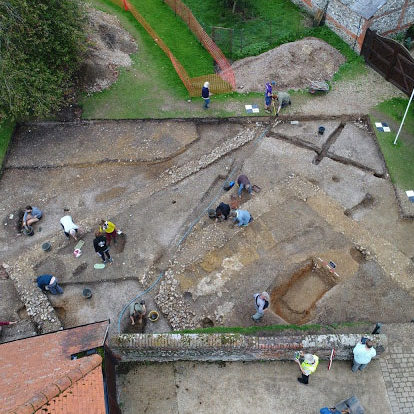 Temple could have been up to 15m high

A Roman temple uncovered in a Hampshire farmyard by University of Reading archaeologists may be the first building of its kind in Britain to be dated back to the reign of Emperor Nero.

The temple remains were found within the grounds of the Old Manor House in the Roman town at Silchester, along with rare tiles stamped with the name of the emperor, who ruled AD54-68.

Four fragments of tiles stamped in Nero’s name were found in a ritual pit within the temple site – the largest concentration ever found in the town – along with another three at the kiln site which made the tiles in nearby Little London. These provide further evidence that the temples could all have been part of a Nero-sponsored building project in Silchester.

Professor Mike Fulford at the University of Reading, who is leading the Silchester archaeology team, said: “These findings are a crucial piece of the jigsaw as we look to solve the mystery of Nero’s links to Silchester. This is something that has puzzled archaeologists for more than a century.

“Only a handful of Nero-stamped tiles have ever been found in the UK, so to unearth this many was very exciting. It adds to the evidence that Nero saw Silchester as a pet project where he could construct extravagant buildings like those seen in Rome, to inspire awe among his subjects in the UK.”
The three temples are the earliest known masonry constructions in Silchester, the city of Calleva in Roman times. They would therefore have been the most prominent buildings in the city, being erected decades before others, like the great complex of the forum basilica in the centre of the town, were rebuilt in masonry. They were aligned north to south at the eastern end of the Roman town.

Ground-penetrating radar, and a follow-up excavation this autumn, have confirmed three temples once stood on the site. They had a typical ‘double-square’ plan – a central cella (shrine) surrounded by a walkway. This design originated in the late Iron Age, and is rare in Britain but more common in France and Germany.

Although the religious purpose of the temples remains a mystery, evidence uncovered at the latest temple site suggests it was built in the 50s or 60s of the first century AD – within Nero’s short reign. Similarities in the layout within the three temples suggest all three were conceived and built at a similar time, although further excavations by the team will test this theory.

Nero’s reign is associated with brutality and extravagance. He was known for the persecution of Christians as well as his grand building plans, some of which were constructed after Rome’s great fire, before his suicide. Nero’s buildings were made in high-quality stone, as well as ceramic brick and tile, but only the tiles found at Silchester are stamped in his name.

The existence of one of his buildings in Roman Britain, as well as evidence he might have visited, has always remained elusive. However, the find of the seven tiles, adding to only 14 previously found in the UK, only at Silchester and Little London, validates the theory that Nero was keen to sponsor a building project in Silchester.

Another Nero tile found close to the public baths in Insula XXXIIIA in the south-east of the Roman town suggests the baths were built early in the town’s development. Excavation to test this will take place in the summer of 2018.