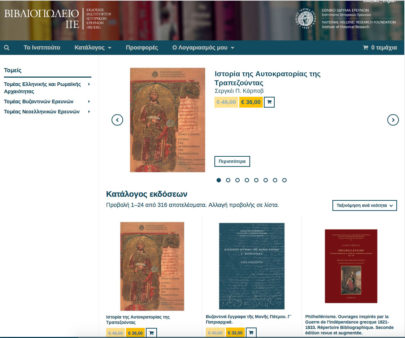 The eBookstore and the publications of the Institute of Historical Research

Of the National Hellenic Research Foundation

The eBookstore (history-bookstore.eie.gr) and the publications of the Institute of Historical Research / National Hellenic Research Foundation were recently presented at an event held at the National Center of Social Research. The director of the Institute, Professor Taxiarchis Kolias, referred to the history of the country’s oldest research institution in the field of humanities (since the early 1960s), but also to the particular importance of creating an electronic bookstore.

The Institute of Historical Research resulted in 2012 from the merging of the Center for Greek and Roman Antiquity, the Center for Byzantine Research and the Center for Modern Greek Research. Speaking about the institute’s electronic bookstore (whose head is Melina Korozi), T. Kolias noted that it aims to promote its publications in a more efficient way around the world. In this way, the Institute aspires to something more; to attract serious researchers from the international scene to entrust their books to its publications or to publish their research in its editorial series.

Speaking about the publishing activity of the Greek and Roman History Section, Charikleia Papageorgiadou referred to the following programmes: “Economy and Society: the formation of the Greek World in the Hellenistic and Roman Period”, “The Greek World and the East” and “Greek and Balkan Prehistory and  Protohistory”. She pointed out that the Section of Greek and Roman History also collaborates with researchers outside the Institute, while the contribution of foreign archaeological missions is invaluable. Apart from the books or conference proceedings that are published, the magazine “Tekmeria” is important, functioning also online, as well as the series “Corpora of Inscriptions”.

The Section of Byzantine Research includes the following programmes: “Archival, Palaeographic and Diplomatic Research”, “Institutions, Society, Internal and External Politics of Byzantium”, “Historical Geography of the Greek Region”, “Byzantium and the West” and “The Daily and Social Life of the Byzantines”. The aim of the Byzantine Research Department, said Anastasia Yangaki, is the research and promotion of primary sources. Here we will find the magazine “Byzantina Symmeikta” (also online) or the “Patmos” series with Byzantine documents of patriarchs, emperors and public servants.

The Department of Modern Greek Research is made up of the following programmes: “Modern Greek Literature and History of Ideas”, “Historiography”, “History, Philosophy and Didactics of Science and Technology”, “Geographical Education and History of Cartography”, “Religious Art” and “Institutions and ideology in Modern Greek society”. Ourania Polykandrioti spoke about the Modern Greek Research Department’s online, peer reviewed journal “The Historical Review / La Revue Historique”, as well as about the volumes of the K.Th. Dimaras Annual Lecture.