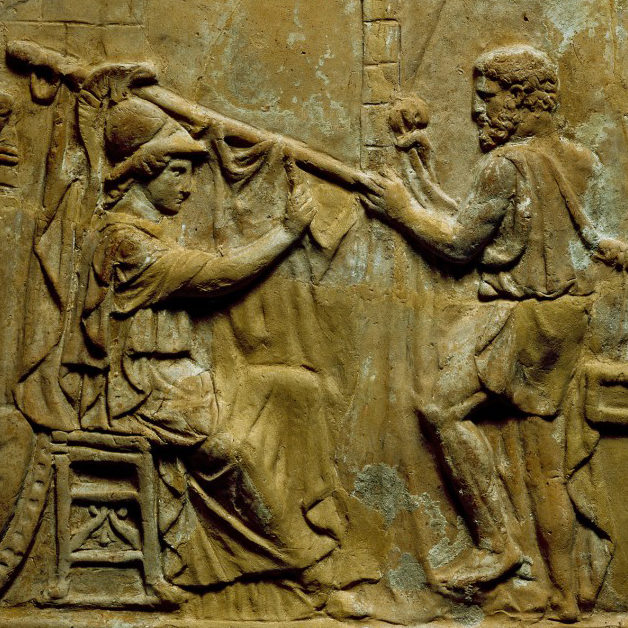 Medea’s Love and the Quest for the Golden Fleece

The Republic of Georgia will be the Frankfurt Book Fair’s Guest of Honour in 2018. Marking this occasion, the Liebieghaus Skulpturensammlung will present important loans from the Georgian National Museum. The exhibition ‘Medea’s Love and the Quest for the Golden Fleece’ will tell a great myth of the Old World: the story of Prince Jason, who has to live through a superhuman adventure together with a group of famous Greek heroes. A dangerous expedition by boat (the Voyage of the Argo) takes the crew to the land of Colchis. They are to seize the Golden Fleece and return to Greece. This basically hopeless task – the fleece is guarded by a dragon – can only be tackled thanks to a great love: Medea, daughter of the King of Colchis and talented sorceress, falls in love with Jason and allows the Argonauts to steal the Golden Fleece.

The exhibition in the Liebieghaus will retell the entire myth based on ancient pictures that have vividly survived on Greek and Etruscan vases, in Roman wall paintings, and especially in Greek and Roman sculpture. The presentation also comprises a number of famous and exceptional bronze and gold objects from the Georgian National Museum. Visitors will find the design of the Bronze Age weapons, receptacles, and golden jewellery items extraordinarily beautiful and impressive.

It is little wonder that Georgia is associated with its legendary gold finds in the myth, as the discovery of one of the oldest gold mines and facilities for processing gold in Sakdrisi is considered the spectacular achievement of today’s archaeological research in the country. New findings prove the outstanding significance of gold mining for the civilisation of early Georgia and, once again, evidence the country’s early richness in gold, which found its reflection in the legend of the Golden Fleece.

In addition, ‘Medea’s Love and the Quest for the Golden Fleece’ takes up the latest research results concerning images of Greek myths, particularly of the legend of the Argonauts. The interpretation of the famed Quirinal bronzes, the so-called Boxer at Rest and the so-called Terme Ruler, has been contentious since the works’ discovery in 1885. Investigations in the context of the polychromy research carried out by the Liebieghaus have yielded insights into the formal and narrative design of the two bronzes. By confirming their interpretation as a representation of one of the crucial adventures of the legend of the Argonauts, the exhibition gives centre stage to this group of sculptures, for which a recast is realised.