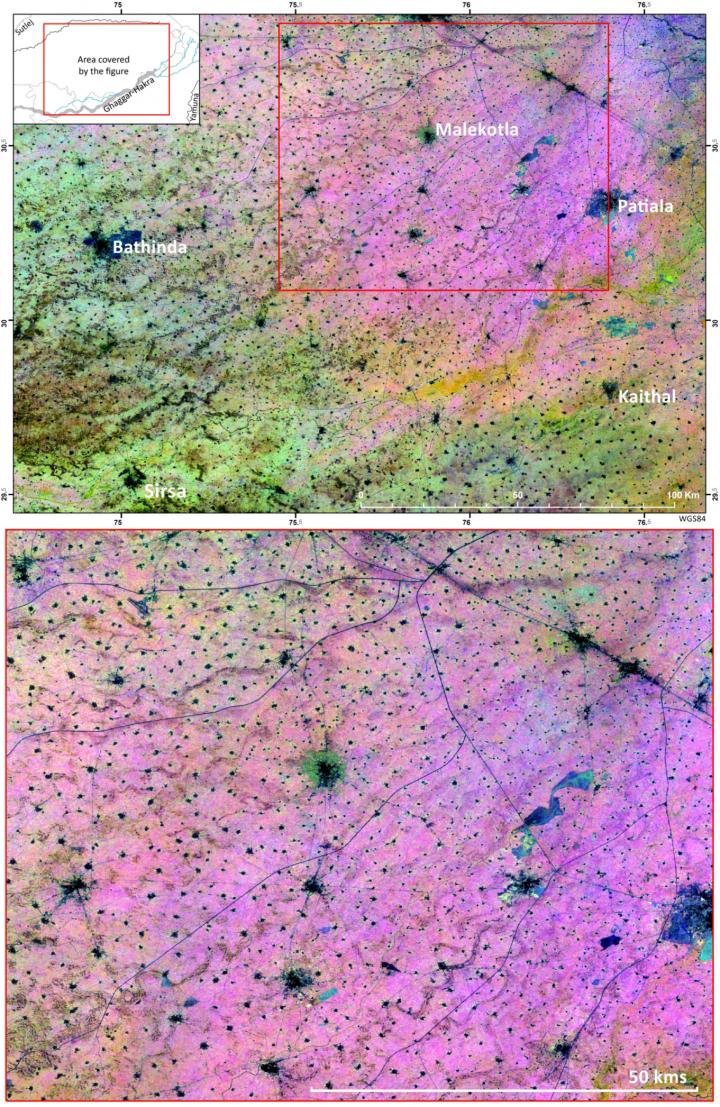 Observing past landscapes via remote-sensing

Remotely detecting changes in landforms has long relied upon the interpretation of aerial and satellite images. Effective interpretation of these images, however, can be hindered by the environmental conditions at the time the photo was taken, the quality of the image and the lack of topographical information.

In general, these techniques were designed to highlight small-scale ‘micro-topographies’ such as the expansive Mayan settlement network recently revealed in the dense jungles of Guatemala. But, how to connect the dots on a larger scale?

Dr Hector Orengo, researcher at the McDonald Institute for Archaeological Research and lead author of the study, said, “We originally developed this algorithm to complement multitemporal remote-sensing using multispectral satellite images that are currently being applied to the reconstruction of the prehistoric river network in northwest India as part of the TwoRains project.”

The TwoRains multitemporal remote sensing approach has had an important impact as it was able to find and accurately trace more than 8,000km of relict water courses; the image of which has been selected as the cover image of this year’s Cambridge Science Festival (see image). This composite image of vegetation indices in Northwest India created from 1254 images reveals a complex palaeoriver network comprised of more than 8000km of palaeochannels. The new MSRM algorithm will contribute to mapping the complete ancient palaeoriver network of northwest India and to a better understanding of how the Indus Civilisation operated c. 2600-1900 BC.

However, the authors were conscious that many ancient rivers were not being found. Dr Orengo said, “It soon became clear that detecting and mapping topographic features such as levees, riverbeds, bluff lines and dune fields could help provide insight into how palaeorivers behaved and eventually disappeared.”

“The new MSRM algorithm has addressed this need and its application has significantly extended our knowledge of the palaeoriver network of north-western India with more than 10,000 new rivers detected.”

Understanding how the Indus civilisation accessed and managed their water resources is at the heart of the TwoRains Project.

Dr Cameron Petrie, director of the ERC-funded project and co-author on the study, commented, “We are investigating the nature of human adaptation to the ecological conditions created by the winter and summer rainfall systems of India. These systems are important for understanding the past and planning for the future due to their potential for direct impact on very current issues such as food security and the sustainability of human settlement in particular areas.”

“Humans can adapt their behaviour to a wide range of climatic and environmental conditions, so it is essential that we understand the degree to which human choices in the past, present and future are resilient and sustainable in the face of variable weather conditions, and when confronted with abrupt events of climate change. Reconstructing the prehistoric hydrographical network of the Sutlej-Yamuna interfluve in northwest India helps us to understand these adaptations more fully.”

Dr Orengo believes that the new method has many uses outside the realm of archaeology. He commented, “The application of MSRM can also be beneficial to all other research fields aiming to interpret small terrain differences. We have made the code open access in the paper with the hope that others will be able to use it for their own interests, and also evaluate and improve it.”