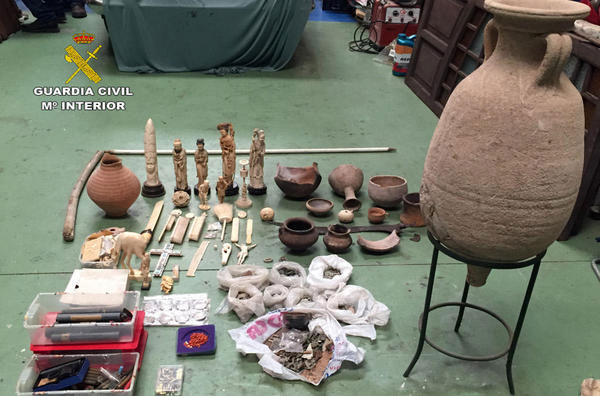 More than 41,000 objects including coins, furniture, paintings, musical instruments, archaeological pieces and sculptures have been seized in a global operation targeting the trafficking of cultural artefacts.

The seizures were made during the first joint customs and police operation codenamed Athena organized by the World Customs Organization and INTERPOL, and the Europe-focused Operation Pandora II coordinated by the Spanish Guardia Civil and Europol.

Tens of thousands of checks were carried out at airports and border crossing points across 81 countries during the operations which ran from October to December 2017. Auction houses, museums and private houses were also searched, resulting in more than 300 investigations being opened and 101 people arrested.

With the Internet becoming an important part of the chain in the illicit trade of cultural goods, law enforcement officers also monitored online market places and sales sites.

This resulted in the seizure more than 7,000 objects, nearly 20 per cent of the total number of artefacts recovered during the operations. In just one investigation in Spain, the Guardia Civil seized more than 2,000 cultural objects, the majority of which were coins from the Roman and other Empires.

Officials also seized 88 pieces of ivory as well as weapons including swords, a crossbow and 39 historical firearms ranging from rifles to pistols.

-Argentinean Federal Police recovered the shell of a Glyptodon, an extinct mammal. The shell, estimated to be more than one million years old, was on sale for USD 150,000.

-Brazilian Customs seized a marble head hidden in a passenger’s suitcase. Verification of the piece’s provenance is ongoing.

-A painting by Nicolas de Staël worth approximately EUR 500,000 was intercepted by French Customs at the Gare du Nord in Paris as it was being smuggled to London.

-Searches of a businessman’s two homes and two commercial properties by Greek Police resulted in the recovery of 41 archaeological objects which did not have the necessary license.

“The results of the Operations Athena and Pandora II speak for themselves: cooperation between Customs and Police can yield excellent results and should be promoted and sustained at all levels. The fight against illicit trafficking of cultural objects has been long neglected by law enforcement agencies, however, we cannot turn a blind eye to it,” said WCO Secretary General Kunio Mikuriya.

While we lose our common history and identity, the proceeds of trafficking fuel terrorism, conflicts and other criminal activities. We will keep working in this area of enforcement and will soon deploy the first specialized global training curriculum for Customs administrations – a very concrete and hands-on outcome of our common work,” he added.

INTERPOL Secretary General Jürgen Stock said the Operations struck a blow against the illicit trafficking of cultural goods which poses a threat to international peace and security.

“For criminals, the black market in works of art is becoming just as lucrative as for drugs, weapons and counterfeit goods. Ancient artefacts also represent a potential source of great wealth for terrorist groups,” said Secretary General Stock.

“To know what has been stolen and from where is the first step in any investigation, which is why INTERPOL is continuing to encourage the creation of specialized national unit and databases,” added the INTERPOL Chief.

Given the global nature of Operation Athena, a 24-hour Operational Coordination Unit was jointly run by the WCO and INTERPOL. In addition to assisting information exchanges and issuing alerts, the unit also carried out checks against various international and national databases, such as INTERPOL’s database of Stolen Works of Art.

At the European level, Operation Pandora II was conducted with the use of the SIENA information exchange tool involving Europol’s 24/7 Operations Centre to cross-check personal data.