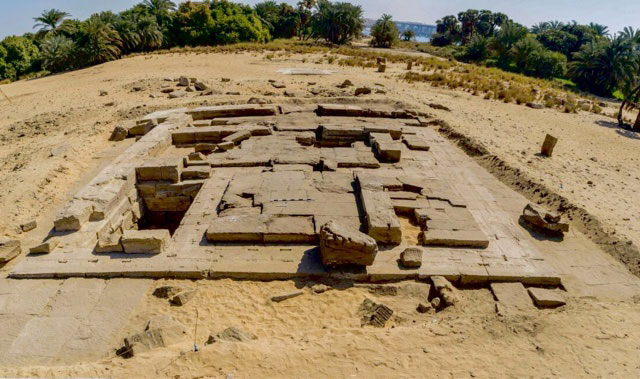 The Egyptian Excavation Field School at Kom Al-Rasras archaeological site in Aswan has uncovered the remains of a temple dating back to the 2nd century of the Roman era.

The temple bears the cartouches of a number of Roman emperors such as Domitian (81-96 m), Hadrian (117-138 m) and Antonius Pius (138-161). Head of the Ancient Egyptian Antiquities at the Ministry of Antiquities Dr. Aymen Ashmawi explains that the excavation
work has also discovered the temple’s holly of the hollies (Sanctuary), which consists of three chambers leading to a cross-sectional hall connected to another hall with a sand
stone worked access ramp, inside it was found the remains of stone engraving with stars representing the sky. This could be part of the temple’s ceiling. Dr. Ashmawi continues that the site of the discovery might be connected to Gebel Al-Silsila area as the temple was most probably a part of the residential area of the quarry workers because the name of the site Khenu was engraved on one of the discovered blocks. Further excavations may lead to the discovery of the residential area of Al-Silsila quarries.

On his part Dr. Bassem Gehad, Assistant to the Minister of Antiquities for Human Resources and training said that this is the first Egyptian excavation field school to be created.

Such school comes within the frame work of the Ministry of Antiquities to establish a number of Egyptian field schools in order to develop the skills of junior archaeologists in
several archaeological domains among them the excavation, documentation restoration and site management, through the implementation of a number of lectures and field work. He pointed out that the Ministry has established four similar training centers in Alexandria, Upper Egypt, Giza and South-Sinai and is schedule to establish six more schools to cover all Egypt.

The Al-Rasras field school started its training work in January 2018 where 16 Archaeologists from Sohag, Qena, Luxor and Aswan have been trained.