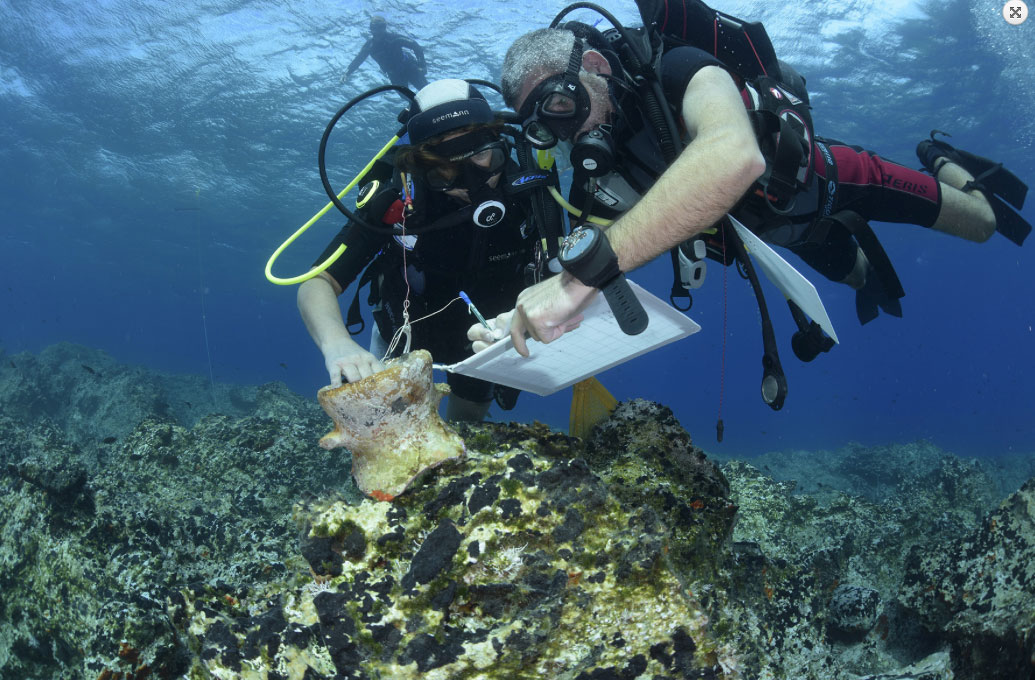 Underwater archaeological research in the sea off southern Naxos

Continued for the third year running

Τhe underwater archaeological survey in the sea off southern Naxos is into its third year, with the collaboration of the Ephorate of Underwater Antiquities, the Norwegian Institute at Athens and the Norwegian Maritime Museum, Oslo.

Research has begun since 2016 with the aim to locate and document underwater antiquities, particularly ancient harbours in the sea along the island’s southern coastline, from Alykos to Panormos.

In this year’s field survey lasting from May 2 to May 10, extensive and very deep areas of the sea were explored, thus completing the three year project of collaborative research.

During the surveys, seabed prospecting was carried out with a 680 KHz side scan sonar. The locations with morphological abnormalities (targets) recorded during the sonar scanning were then checked with the use of a Remote Operated Vehicle which showed the target’s image on a computer screen. The microtopography was thus mapped of a significant sea area that had remained unexplored till now.

Research was carried out using a traditional caique which has the ability to maintain a steady low cruising speed of 1.5 knots, required for the many hours of seabed prospecting with a sonar torpedo.

In all, 6.2 square kilometres of sea area were scanned and 15 locations were observed with the Remote Operated Vehicle. Twelve potential sites of archaeological interest were recorded. Two sites were also located, one in the sea area off Panormos and the other off the Moni Peninsular, with a scattering of ceramics originating mainly from amphorae of Roman and Late Roman times.

Research was headed by archaeologists Dr Angeliki Simosi on behalf of the Ministry of Culture and Sports and Dr Sven Ahrens of the Norwegian Maritime Museum, Oslo, with scientific associates Aikaterini Tagonidou, diving architect–engineer of the EUA and Frode Kvalø, Norwegian archaeologist and in charge of equipment. Also participating was Jean-Gregoire Kmerian, constructor and operator of the ROV. Significant aid to the research was provided by Manolis Bardanis of the local diving centre “Naxos Diving”, and by Yannis Bardanis, captain of the research vessel.