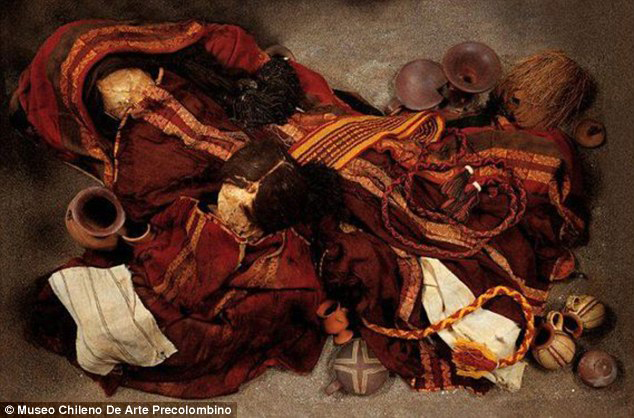 In the grave of the Cerro Esmeralda mummies in Chile the bright red powder found in one of the textiles (mantos) was a highly toxic mineral that comes from mercury ore.

“Cinnabar is a toxic mineral, which becomes more toxic when subjected to thermal processes above 300 °C”, according to the paper of B. Arriaza et al., published in Archaeometry this spring, where the new analysis of the pigment detected on the grave textiles is being described.

The two mummies came to light in 1976 from a burial site in Cerro Esmeralda, Chile. The date to approximately AD 1399 to 1475. The remains of the two young females — one 9 years old when she died, and the other 18 to 20 years old when she died — were found in the fetal position alongside 104 grave goods. Based on the quality of the artefacts, archaeologists suspect that the bodies were buried after a ritual Inca sacrifice.

“The use of cinnabar has been widely reported at archaeological sites in various parts of the world. For example, in the Old World, its use has been reported in Roman architecture and art (…) and also in human remains and artefacts from the Neolithic/Chalcolithic (5400–4100 BP) period of the Iberian Peninsula (…). Equally, early use in Serbia and traditional medicine in China and India have been described (…). Likewise, in the New World, the use and geological origin of cinnabar in Mesoamerica and in the south-central Andes has been widely reported (…). Moreover, in the Andean macro-area, it has been found in a variety of contexts; for example, forming part of tombs, in murals, in masks and ornaments of precious metals and, of course, at mining sites (…). However, until now, the identification of cinnabar from archaeological contexts has not been reported in northern Chile,” the scientists of the recent analysis explain.

The aim of this analysis of the fine-grained red pigment was to determine “(a) if the red pigment described as cinnabar by Checura (1977) was in fact this type of toxic material, (b) whether it was brought from areas under the control of the Inca State, and (c) what the cultural significance of this type of material was in the Late Period or Inca phase (c. AD 1400–1536).”

“The new chemical analyses that we obtained showed that cinnabar was present in the clothes of the Cerro Esmeralda mummies,” the scientists report. “This toxic material is a special and foreign funerary offering in northern Chile.”

Regarding the provenance of the pigment: “the Incas—and, in general, all the societies that supplied themselves with cinnabar from Huancavelica—always used this mineral in prestigious and elite social contexts (…). Thus, we posit that this is also the case for the unique funeral context of Cerro Esmeralda, (…).  Therefore, it is very likely that this mineral has reached the north of Chile along with the other exotic elements that make up the funerary goods of this Inca burial. Thus, the overall context of the Cerro Esmeralda burial accounts for the cultural importance of this archaeological site and for the political fabric that brought this arid region of northern Chile under the powerful state forces of the Tawantinsuyo Empire.”