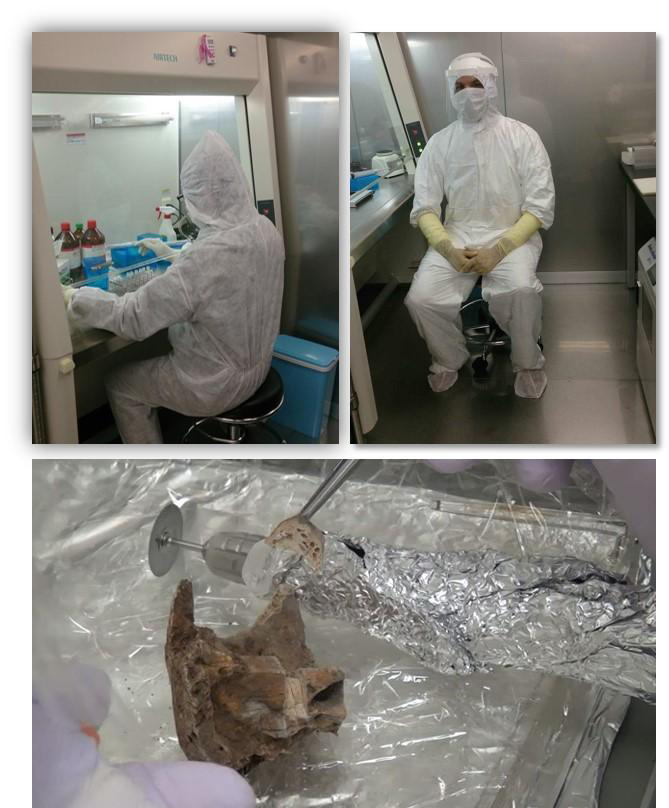 Genomics of Jomon and other ancient skeletons

Recent developments of DNA analysis technology have made it possible to obtain whole genome information from ultratrace amounts of DNA; we are now in an era where whole genome information can be obtained directly from ancient human skeletons discovered at archaeological sites. There remain, however, technical problems for obtaining whole genome information of ancient human skeletons. In particular, there are two main problems: first, genomic analyses of poorly-preserved ancient remains in hot and humid regions of the world have up until now failed. Secondly, there is the risk of contamination of present-day human DNA in the DNA samples of ultratrace amounts from prehistoric remains. To evaluate objectively the possibility of such contamination, several different research groups must cross-check one another in order to achieve exact genome sequencing; in other words, establishment of a collaborative research system is a prerequisite for attaining the highest level of scientific authenticity.

In order to cope with these problems, the present international research team, led by researchers from the University of Copenhagen with the participation of three researchers from Kanazawa University has established technologies to efficiently extract human DNA from skeletons discovered at prehistoric remains even under very poor conditions for DNA preservation. At the same time, an international system of research collaboration has been established for objectively evaluating the effects of contamination by present-day human DNA. Thanks to these efforts, the team has uncovered the expansion processes of human habitats and genetic interactions in hot and wet Southeast Asia, which was not possible previously with conventional technologies and research systems.

Worthy of special mention, the present study has been successful in determining the “whole genome” sequence of an individual with typical Jomon culture, while previous studies were only able to show a very limited “partial genome” sequence of two Jomon individuals. Thus, the present study is the first successful example to show the possibility of whole genome sequencing of prehistoric individuals in regions like Japan where preservation conditions are quite poor, possibly leading to further major progress in prehistoric genome studies.

In the present study, the international research team succeeded in extracting and sequencing DNA from 25 ancient individuals’ skeletons from Southeast Asian remains, where the condition of DNA preservation is very poor, and from one Japanese Jomon female skeleton. Upon comparison of the genomic data of ancient human skeletons with those of present-day human skeletons, it has become clear that those prehistoric populations in Southeast Asia can be classified into six groups.

Group 1 contains Hoabinhians from Pha Faen, Laos, hunter-gatherers (~8000 years ago), and prehistoric populations discovered from Gua Cha, Malaysia (~4000 years ago), being genetically close to present-day Önge and Jarawa from the Andaman Islands and Jehai from the Peninsular Malaysia. To our surprise, group 1 has higher genetic affinities with Ikawazu) Jomon individual (Tahara, Aichi), a female adult), than other present-day Southeast Asians. In addition, the Ikawazu Jomon genome) is best modelled contributing genetically present-day Japanese.

As above, Neolithic Southeast Asians are found to have been partially genetically influenced by ethnic groups in South China and to have had a genetic connection with populations in Taiwan; Neolithic Southeast Asians are found not to have been indigenous hunter-gatherers passively accepting farming but to have accepted farming gradually in the process of migrations of populations between the continent and islands. Conventional archaeology proposed the two-layer hypothesis that, in those periods, a large population with farming culture with rice and millet migrated into Southeast Asia and that they replaced the indigenous population. Additionally, the present study indicates that the genetic influence from South China with rice farming was only partial and that the migrating population did not replace the indigenous population completely. The present analysis shows that there were at least four big migration waves; migrations of Southeast Asians should be investigated with a new “complex model” framework.

The genomic data obtained from ancient skeletons in Southeast Asia and from a Ikawazu Jomon individual provides an important basis for investigations on the origins of populations in wider East Asia. The whole genome information of a Jomon individual will be useful for direct comparison of genomic similarity with ancient East Asians of the corresponding period to Jomon in present-day Korea, China, Russia and others in the vicinity of the Japanese archipelago. More comparative studies are in progress on populations in wider areas. Note that the whole genome sequence obtained in this study for a Jomon individual corresponds to the Draft Genome Sequence in the Human Genome Project for the present-day humans. We aim at Complete Genome Sequence with higher accuracy.

This study is an interdisciplinary undertaking combining anthropology and archaeology in a close collaboration, allowing us to establish ourselves at the starting point for research on the origin of Jomon and its diversity. By more genome analyses of more Jomon skeletons from different Jomon sites, genetic diversity of Jomon populations will be explored over the Japanese archipelago. It is expected through such studies that various interactions among Jomon groups should be revealed together with migrations of archaeological artifacts such as potteries and stone tools as well as migrations of populations. Based on the outcome of the present study, novel anthropological and archaeological approaches would be further developed.

Image: Top left: DNA extraction in a clean bench under the condition with very little modern human DNA. Top right: Disposable dustproof lab coats and special rubber gloves only are allowed to use. Bottom: Sampling from temporal bone of a Jomon human