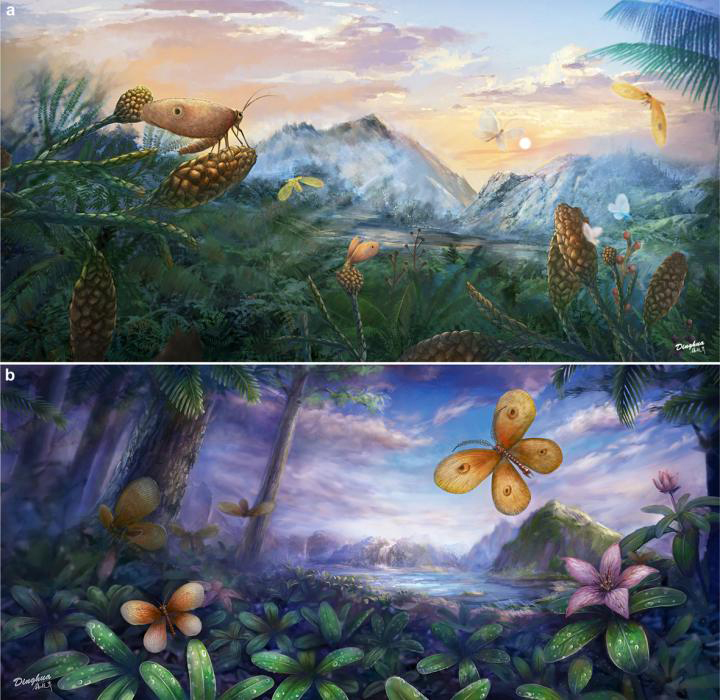 Among the largest and most conspicuous insects

Insect pollination played an important role in the evolution of angiosperms. Little is known, however, about ancient pollination insects and their niche diversity during the pre-angiosperm period due to the rarity of fossil evidence of plant-pollinator interactions.

Recently, a research group led by Prof. WANG Bo from the Nanjing Institute of Geology and Palaeontology of the Chinese Academy of Sciences (NIGPAS) has provided new insight into the niche diversity, chemical communication, and defense mechanisms of Mesozoic pollinating insects. Its findings were published in Nature Communications on September 17.

One of the most intensely investigated examples of pollination niches is the morphological match between insect proboscis and floral tube length, which Darwin described in a publication in 1877. Kalligrammatid lacewings are among the largest and most conspicuous Mesozoic insects with siphoning mouthparts.

Kalligrammatid proboscides vary greatly in length, from 0.6 to 3.2 mm in amber inclusions and about 5 to 18 mm in compression fossils. The high diversity of kalligrammatids and large variation in proboscis length strongly suggest diverse plant hosts with different floral tube lengths. Therefore, pollination niche partitioning may have been present among some Mesozoic insects.

If pollination niches were partitioned, as in extant ecosystems, this likely increased pollination effectiveness and reduced the cost of pollination mutualism, thus contributing to the high diversity of pollinating insects and the success of pollinator-dependent plants during the Cretaceous period.

Kalligrammatid species diversification was potentially promoted by coevolution between pollinating kalligrammatids and their host plants under highly partitioned pollination niches.

Traits such as wing eyespots, which likely functioned as a defense in large-sized species, and sexually dimorphic antennae, which were likely used for pre-mating chemical communication, elucidate how kalligrammatids survived in the Mesozoic terrestrial ecosystem under intense competition.

However, such elaborate associations between kalligrammatids and their host plants (mostly confined to gymnosperms) could have been a key factor contributing to the extinction of kalligrammatids, which likely occurred during the late Cretaceous with the decline in gymnosperm diversity.