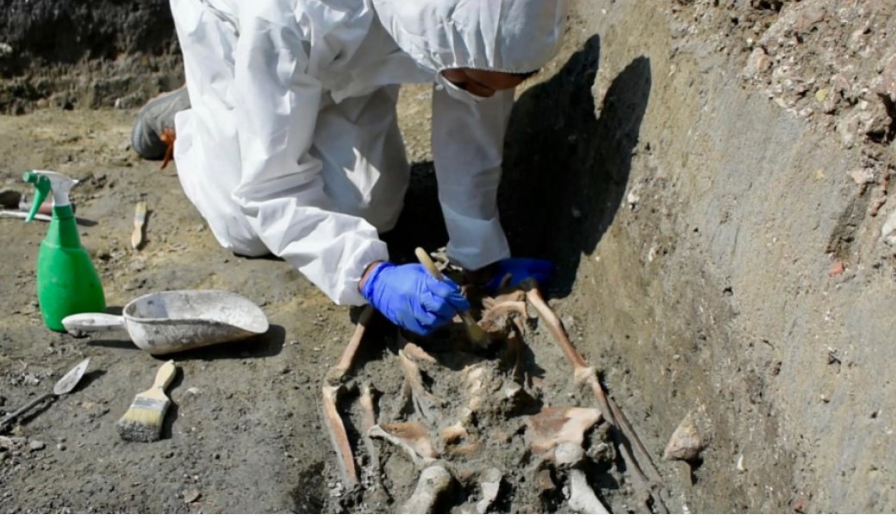 Nearly intact, with the exception of the head

On the island of Torcello, at the Ca’ Foscari University of Venice excavation site, some protagonists of the island’s thousand-year history have begun to emerge. A tomb datable to around 700 AD has recently been unearthed by the site’s team of scholars, who hail from universities throughout Italy, under the scientific direction of archaeologist Diego Calaon (a Marie Curie Fellow).

“The subject is a young adult, whose burial–not far from the area we imagine was used as a cemetery adjacent to the Basilica during the Early Middle Ages–maintained nearly the entire skeleton intact, with the exception of the head. We mustn’t be misled, however: the discovery of the residual parts of the right side of the skull and of the perforation coming from above (probably due to a construction pole) which occurred during modern times, indicate that the burial was complete and that the defects we see today resulted from activities which occurred later on in the area”.

The discovery is an important one: during the archaeological digs that took place on Torcello in the 1960s and 70s, cemetery sites were excavated, but for the most part only relatively modern ones pertaining to the High Middle Ages. Being able to analyze the biometric data of those who lived on Torcello from the sixth to ninth century presents a unique opportunity. Who were the ancient island residents who lived in the well-constructed wooden houses that were densely present in the area? Free workers? Slaves? Was this a community which already had deeply Christian roots, or not? If the burial site was isolated, or not connected directly to the Church, multiple hypotheses may arise: DNA and biometric analyses will reveal important interpretative data.

The burial has been excavated in an area which is particularly interesting in terms of stratigraphy: we are at the head of an ancient lagoon canal that separated the island of the Ancient Church of Saint Mary from the inhabited area of the medieval settlement: over time, the channel was fortified with hundreds of wooden poles, indicative of a “hunger for space” on the part of homes and craft businesses that required the enlargement and creation of new living spaces.

As the excavation has expanded, it has revealed how the eighth and ninth century were significant and demonstrative of the island’s population explosion: the presence of dense wooden houses, docks, fireplaces and production facilities, proven by hundreds of ceramic fragments from kitchen pottery (including many covering basins, the dishes of yesteryear for cooking breads and cakes in fireplaces on the ground), amphorae for oil and wine, and soapstone vessels for cooking soups and stews.

The inhabited area includes a large number of warehouses, constructed and active in the two previous centuries, from 500-600 AD: “Torcello became a hub of movement within the lagoon precisely at this moment. Altino was no longer feasible as a port, and the warehouses that we are excavating on the island,” explains Diego Calaon, “are revealing that long before the ‘imagined’ or ‘legendary’ barbaric destruction occurred, the local elite had fully invested in creating an efficient ship yard precisely in the littoral area of the time. Warehouses were built with reused Roman bricks, some with markings on them, fashioned with stones taken from ancient Rome. The porticoed harbor warehouse visible on Torcello nowadays is exceptionally well preserved: we will be able to clean up the interiors within 5/10 days of work”. Thanks to the Torcello Abitata project and archaeology talks also attended by the citizenry, inhabitants as well as external interested parties will be able to discover more.

Meanwhile, there is another project underway at a different location where a construction of large dimensions (more than 25 meters in length), which may be interpreted as a boat garage and warehouse datable to the fourteenth century, is currently undergoing excavation and study. The structure, with a solid stone foundation (again, “pieces” from Altino which were salvaged for use here in the lagoon) sits opposite a very old and sturdy stone-laid riverbank, which was subsequently reinforced by an outward-facing jetty reaching where the Sile river used to flow. Between the riverbank and the warehouse, the obvious and abundant characteristics of a medieval shipyard for organizing and holding boats, probably for fishing, with traces of poles for hauling, for lateral mooring and, probably, for preparing pitches.

It is a history rich with elements which is a marvel to discover from one day to the next.