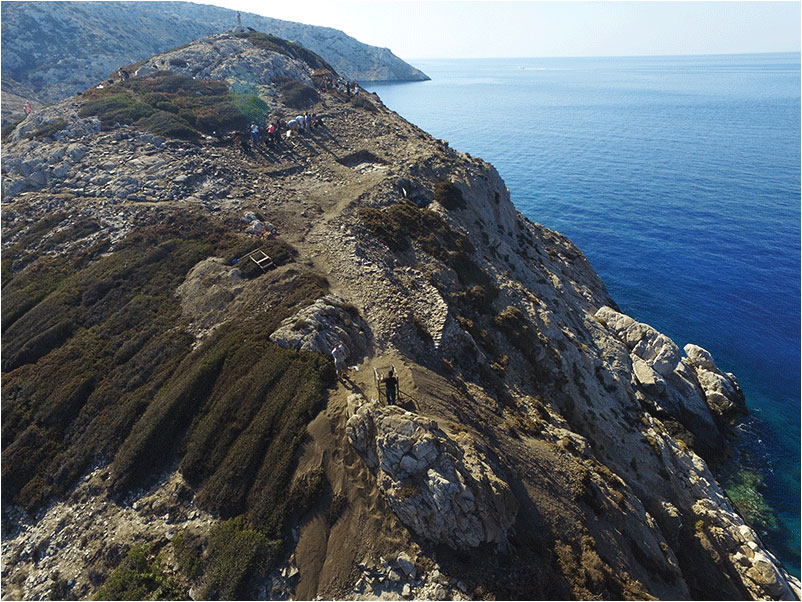 Excavations on Dhaskalio have been completed

An important excavation for global archaeology was completed a few days ago in the heart of the Aegean Sea. The excavation, conducted by a research team headed by archaeologists from the University of Cambridge, the Ephorate of Antiquities of the Cyclades and the Cyprus Institute, concerned the islet of Dhaskalio, unknown to the public at large, on the most western peninsular of Keros, an uninhabited island in the Cyclades.

With the close of the excavation period, two eminent archaeologists were invited to talk on the radio station “Praktoreio 104,9 FM”; archaeologist, researcher and paleolinguist, professor at the University of Cambridge, Lord Colin Renfrew and archaeologist of Cambridge University Dr Michael Boyd spoke about the findings at the site of the prehistoric settlement of Dhaskalio, the new discoveries and the first conclusions to be reached.

For Lord Renfrew, who at 81 is considered as one of the most important archaeologists of the prehistoric era of his day, Keros is not a new field since he began to research its treasures in the 1960s as a young scientist. This research reached its heyday in 2018, revealing new finds that are expected to be studied in the years to come. These are finds that according to the British professor prove that the region of Kavos to the west of Keros , like the small island of Dhaskalio was a “maritime sanctuary which appears to have been the most ancient of its kind in the world”.

This year’s excavations focused on the greater area and were more specifically concerned with settlements such as that of Dhaskalio which is believed to have been joined in 4500 BC to the Kavos region on Keros by a passage above water, while it is now confirmed that Keros was the centre of a greater Cycladic region.

Part of the finds in the region were deposits transferred from different Cycladic islands to Kavos on Keros, fragmented figurines, sculptures of Cycladic marble, pieces of broken marble arrows and broken pottery. For reasons associated with a religious cult, these artefacts were already broken when they were transferred there in antiquity to be offered at Kavos, which geographically was the island’s best natural harbour, with a view of the north, south and west Aegean.

This year’s excavations however have proved something also important to the archaeologists; the existence of a transport network in the Aegean of 4500 B.C. ‟The most important fact for us was that the buildings on Dhaskalio were made of good quality marble with marble elements. All this marble had to be imported from Naxos (..),tons and tons of marble from Naxos to Dhaskalio so as to construct the buildings we find there” said Lord Renfrew. The archeologists were likewise very impressed by the constructions on Dhaskalio of that period ‟with impressive stairs”, which were recently unearthed.

Recording with the use of digital technology

An important parameter of the excavation is also the use of state-of-the-art technology. “Instead of the classic method of designing by hand, we use a technique called digital photogrammetry, that allows us to create three-dimensional models of everything we do,” explains Dr Michael Boyd, archaeologist at the University of Cambridge and points out that thanks to new techniques the entire excavation is depicted digitally.

“In this way, when we want to look at the excavation again, for details, we shall be able to see almost everything, since in a space of an hour or two a recording will be made in 3D virtual reality,” says Dr Boyd. Each detail is transferred to the digital world via ipad.

“We use it to record everything digitally and in this way we have no need of paper”, he adds, which he considers to be a huge step ahead, because in the past an excavation’s data could be found in multiple independent data bases “now, instead, when we want to study some aspect of the excavation, we can see practically anything and every aspect of the excavation”, explains the British archaeologist.

Over the next period the scientists will begin the study of the finds which is expected to last almost two years followed by the publication of the results. Below is the complete interview of the two archaeologists to Sotiris Kyriakides on “Praktoreio 104, 9 FM”.

Q.: Professor Renfrew, Greeks know very little about Keros, so we would like you to give us a “guided tour” of this small island in 4500 B.C. Let’s turn back the clock with your help…

Q.: What would you describe as the most exciting of all your discoveries in these excavations to date?

Α.: The most exciting discoveries were made during excavations in the Kavos region, where we uncovered hundreds of parts, fragments of broken figurines and sculptures of Cycladic marble such as those known to the public from museums round the world, with folded arms, except that those we found were broken at the special deposition site we discovered at Kavos, actually broken deliberately and then buried along with pieces of broken marble arrows, broken pottery and other similar finds. It is therefore clear that these were brought from different Cycladic islands and deposited at Kavos on Keros. So this year, the excavations concerned relevant settlements such as Dhaskalio which we believe to have been joined to Kavos on Keros by some path above water during the time we are referring to.

Q.: For what reason are the things you are describing to us important to the scientific community? Have you as archaeologists changed your views regarding the means of transport, the transport of goods in general, at that time?

Α.: It is certainly important that the findings of materials brought from other islands are being discovered, though the truth is that we know that sea transport was possible at that time, because of the transportation of obsidian, the black organic glass used for the making of nails etc, from the island of Melos, that began much earlier. The most important fact for us, however, is that the buildings on Dhaskalio, buildings which were made of good quality marble and with masonry containing marble elements, all the marble had to be imported from Naxos. So regarding the import, the most impressive fact is that tons and tons of marble was brought from Naxos to Dhaskalio, to construct the buildings found there.

Q.: Consequently the most exciting fact, based on what you are telling us, is that the construction as a whole is complex. Was it perhaps a spot with an important role to play? And were the constructions as advanced regarding their other elements, such as the infrastructure related to the use of water?

Α.: Yes, we can say that, and here I should stress that we are grateful to the Greek Ephorate of Antiquities; grateful for the collaboration and for the services that gave us the permit for the excavations. I should like to thank my colleagues, not only Dr Boyd but also Mrs. Irene Legaki from the museum of Naxos, Mrs. Evi Margaritis from the Cyprus Institute and Dr Ioanna Moutafi who supervised work on the excavation field at Dhaskalio. It is certainly especially impressive that, supposedly for religious reasons, all these finds were brought already broken as offerings to Kavos, while the imposing constructions were built on Dhaskalio with magnificent stairs, one of the facts that made the most impression on us.

Q.: Mr Boyd, if we now travelled back in time to 4500 years BC and arrived by sea at the spot where excavations are in progress, what would we see?

A: If we approached, we would be on a small craft, about 15 to 20 people, we would be travelling and would see the triangular islet of Dhaskalio. What we would discover, however, is that, unlike today’s picture which is that of a rocky island, in the past all the island was covered in buildings. A series of walls had been constructed made of rocks that had been used to prepare flat surfaces on which were the buildings. Buildings made of very good quality Naxian marble. So approaching the site we would see a series of levels covered in buildings which reached the tops of the hill. This must have created a very powerful image at that time. We believe that the entire spot we see today was covered with constructions, giving the place an almost urban appearance.

Q.: So as this picture is revealed, one assumes that all the finds must be recorded. What technology is used for this?

Α.: Actually we do use many elements of new technology in these excavations. First of all, instead of the classic designs made by hand, we use a technique called digital photogrammetry that allows us to create 3D models of everything we do. This was something that happened very regularly during the excavation, many times a day in each place we were excavating, so that in future there will be thousands of these 3D models. In this way when we want to look at the excavation again, for details, we shall be able to see almost everything, since in a space of an hour or two a recording is made in 3D virtual reality.

The other aspect of the recording system is that we use systems based on ipads. We use these to record everything digitally and so we do not need to use paper. We also use them to record all the finds, the studies of the finds and all the environmental data, so that everything is stored in one data base. This is a tremendous step forward, since in the past all our data would have been in separate bases, often on paper rather than digitally. Whereas now, since the data is in one place, when we want to study some aspect of the excavation we can see practically everything and each aspect of the excavation.

Q.: We can therefore assume that such a process might also speed up the access of the general public to the finds and the conclusions reached when these become available .If someone asked you, which would be the possible ‟title” you would give to all you have found on this journey to a world of 4500 BC?

Α.: The important fact given to us by all the different finds is the idea, the concept of networks crossing the Aegean Sea. Each part of our finds shows us that people arrived at Dhaskalio and left via networks that crossed the Aegean Sea. I would therefore think of a title that had to do with networks. Professor Renfrew on the other hand prefers to talk about the “Confederation of Keros” which is a way of saying that Keros seems to be at the heart of the concept of a “community”r in the Cyclades of the time.

Q.: What does the end of this excavation period bring and what are the plans for the next stages?

Α.: We will immediately be starting on the study of the finds, which I estimate will last almost two years and then we shall go ahead directly with the publication of the results.