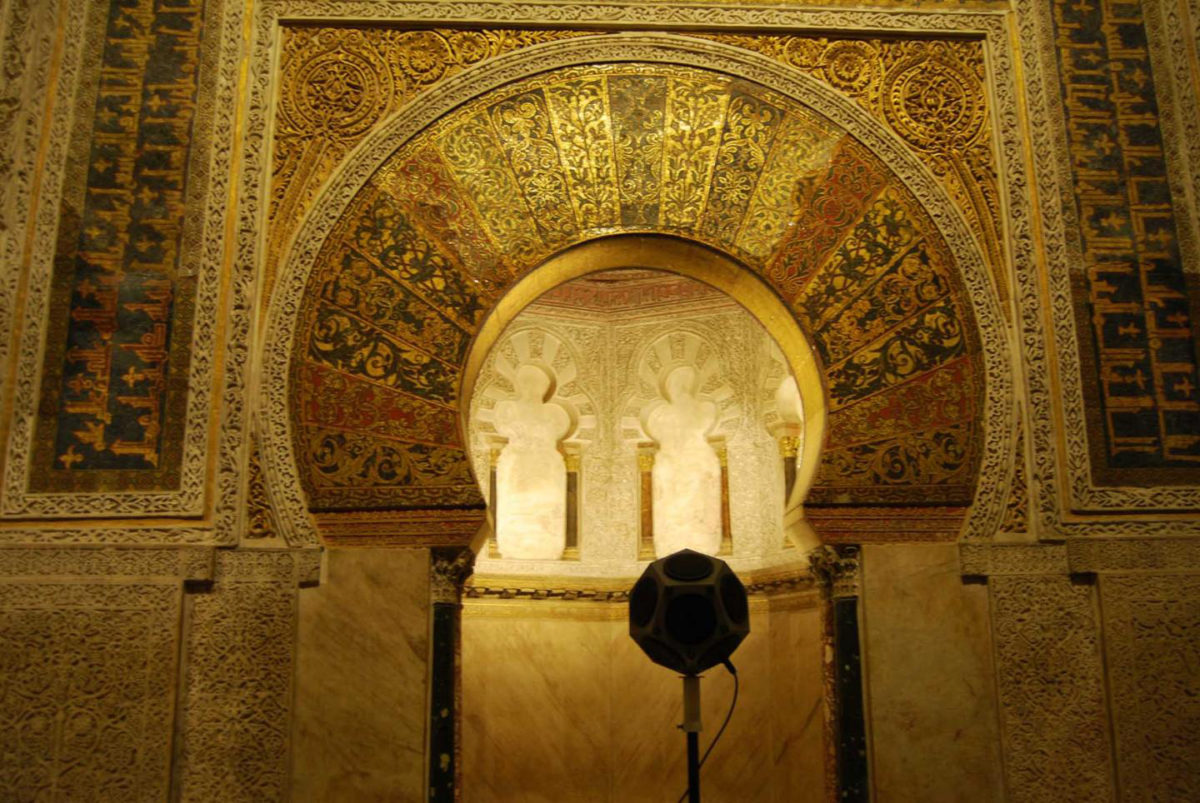 How did words or the rain sound inside the Mosque of Cordoba in the time of Abd al-Rahman I? Today, thanks to virtual simulation tools, it is possible to know the sound filed of spaces that no longer exist. This field of work is known as “Acoustic Archaeology” by some researchers. Working in this field, researchers from the Higher Technical School of Architecture at the University of Seville have carried out a study in which they have determined the variation of the acoustic parameters, such as reverberation, clarity or definition of the Mosque of Seville currently.

Faced with the visual homogeneity of the interior of the Islamic mosque, the results obtained in the acoustic study allow us to confirm that the sound perception varies by area. This is due to the successive expansions that the temple has experienced during its history.

“The mosque founded by Abd al-Rahman I responded acoustically to Muslim liturgical requirements, providing a living space that favoured their majesty. Later expansions gave a formal appearance of superposition on the pre-existing space. However, notable sound difference were produced in the interior space. This, united with the increase in depth caused by the expansion of Abd al-Rahman II, meant a reduction in the acoustic quality of the areas furthest away from the qibla wall”, explains the University of Seville professor Juan José Sendra.

With the expansion of Al-Hakam II, two acoustically juxtaposed mosques were obtained. The last lateral expansion, by Al-Mansur, in which even the mihrab was decentred with respect to the new layout, was separated from the rest of the building, with a clear degradation in the quality of verbal communication.

The Christian transformations of the Mosque, to make it suitable for use as a cathedral, substantially modified the Muslim space. Therefore, the experts state that in the modern day space of the Mosque-Cathedral is a “complex architectural unit”, with a multiplicity of sound spaces, the fruit of all the spatial transformations that have taken place, each different according to the spatial archetype, be it Muslim or Christian.

Various articles have been published, from different perspectives, which analyse the sound in the cathedrals of Seville, Granada, Malaga, Cordoba and Jaen. Specifically, in the case of Seville Cathedral, articles have been published that have analysed both the acoustic-spatial variety of the cathedral space, as well as the influence certain special spatial configurations have had on its acoustics, for example, when there is a big concert, or of the temporary architectural features present for certain religious celebrations. The present study is published in Publicado en Applied Acoustics.

Currently, they are also working on publishing a book that intends to decodify the complex and fragmented space of the Mosque-Cathedral today, via analysis of its process of evolution from the first mosque of Abd al-Rahman I until the present day, with the aim of recovering a lost sound memory.