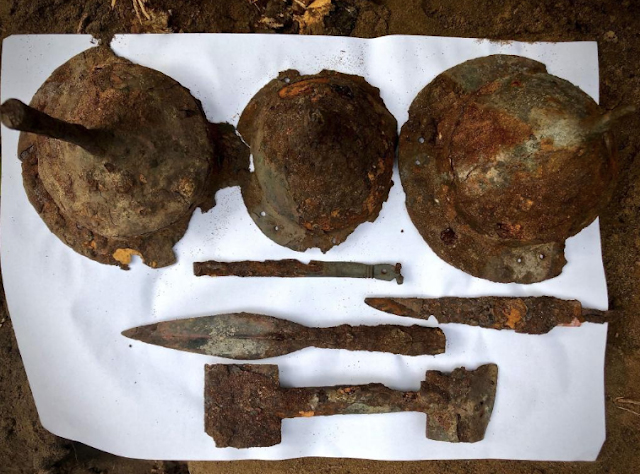 Polish archaeologists have discovered dozens of iron and bronze artefacts including a sword and decorative buckles in a nearly 2000 years old Germanic cemetery, archaeologist Krzysztof Socha from the Kostrzyn Fortress Museum reported to PAP.

The cemetery is located in Gorzów poviat (county), though archaeologists have not revealed the exact location of the newly discovered cemetery toprevent its destruction by treasure hunters who search fields and forests withmetal detectors. Socha emphasises that he was surprised by the large number ofdiscovered metal objects. Archaeologists have also found numerous fragments ofburned human bones.

“After preliminary research, which we carried out in November, Ibelieve that we are dealing with a huge, perhaps even several-hectare cemeteryfrom the first centuries of our era”, says Socha. Three complete graveswere discovered during the excavations; the remains of the dead had been cremated. In one case, they were originally in a ceramic urn, in the other two they were poured into pits dug in the ground.

Socha added that thenecropolis has been largely destroyed by forest management – the forest wasplanted in this place nearly half a century ago. “We do not know if there had been a forest here before, but during the excavations we recorded traces of very deep ploughing, which could have contributed to the degradation of the ancient burials”, he said. But according to the archaeologist, there had been many more graves. This is evidenced by artefacts chaotically scattered just below the surface.

“The first complete graves probably belonged to warriors because we found weapons in the graves, including a ritually bent metal sword, spear heads and shield bosses. We are also finding metal elements of clothing such as belt buckles and other adornments in the area. This shows that the cemetery belonged to the entire community – probably women, men and children”, said Socha.

Researchers are now waiting for the anthropological analyses of the bones which will determine the sex of the deceased.

Archaeologists believe that the cemetery belonged to a Germanic community. “Here, the influence of the Goths and Vandals clashed with influences from the Elbe”, says Socha adding that this conclusion can be drawn from various artefacts. He emphasises that this is one of the few cemeteries of this type in western Poland. The ancient cemetery was discovered in April 2018 when several artefacts, including metal shield bosses, were revealed in the roots of felled trees following a violent storm.

Archaeologists are preparing an exhibition of artefacts that will be opened next year in the Kostrzyn Fortress Museum.