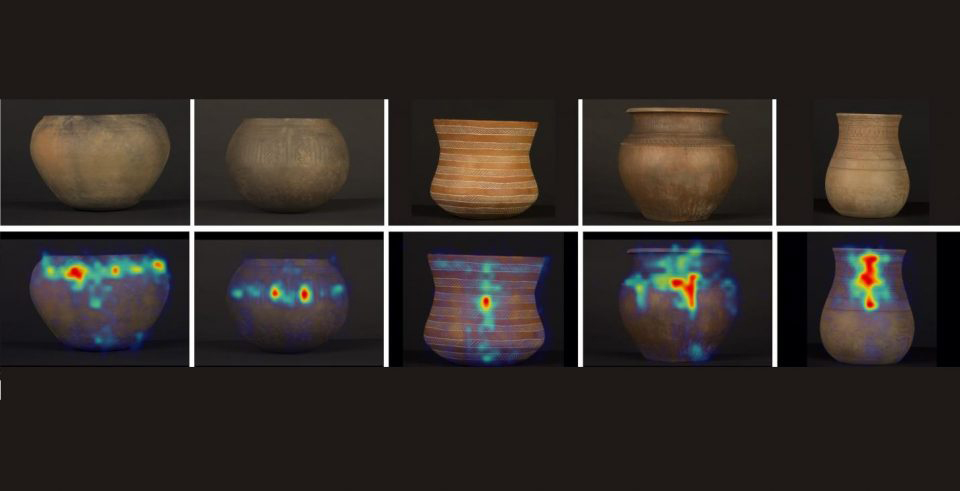 The ceramics analysed cover 4.000 years (from 4.000 B.C. to the change of era) of Galician prehistory (north-west Iberia), and are representative of ceramic styles, such as bell-beaker pottery, found throughout Europe. The results indicate that the visual behaviour follows the same evolutionary trends as those that drive the evolution of the complex societies that built these archaeological materialities.

“We hypothesised that culture and social life influence cognition in a highly stereotyped fashion. Eye movements are the most objective proof of a parallel evolution between the cognitive process, material development and changes in social complexity”, explains CSIC researcher Felipe Criado-Boado, from the Institute of Heritage Sciences, in Santiago de Compostela. This study is part of the field of neuroarchaeology, a new scientific field that combines neuroscience with human palaeontology, archaeology, and other social and human sciences.

“The visual prominence of each ceramic style produces a distinct visual response. Prehistoric ceramics comprise an important part of the material world that surrounded the individuals of that time. This is why an analysis of this kind is not only feasible, but also provides very significant results”, adds Criado-Boado.

Luis M. Martínez, a researcher from the Institute of Neurosciences, in Alicante, explains that, “in our brain there are neural circuits, or maps, that represent our personal and peripersonal space. These circuits determine the way in which we relate socially, and also with the world around us. With experiments of this kind, we are demonstrating that these representations are modified by the use and making of tools and other cultural artefacts; what we are discovering is that they are quickly incorporated into these neural maps, becoming part of our body schema as if they were an extension of it. These experiments unequivocally demonstrate that there is a very close interaction between cultural changes and brain plasticity, which provides a new perspective on how the brain governs for the transmission of cultural values, beliefs and customs”.

The results of this research indicate that the human visual system actively internalises the object it observes, which would demonstrate that there is a perceptual engagement between the observers and the material structures in their environment. “This is why perception cannot be separated from form. Seen from this perspective, it could be proposed that the shape of objects (pottery, in this case) and the pattern of visual exploration they produce have changed over history, and are connected with behaviour in the same way as they are with the social realm, including social complexity,” says Criado-Boado.

Another of the conclusions of this study is that technology is an important factor in the mental aspects of human life. This offers a new perspective that helps to explain the processes of innovation and technological change that take place in all historical periods, including the present day. “It is believed that by 2020 there will be 100 billion sensors around the world capturing information of all kinds and processing it digitally, all connected to each other and functioning like an enormous human mind. If this prediction is fulfilled, research in the field of cognitive processes and material culture throughout history may be useful for the future, since it can show how humans rely on images that symmetrically help them to shape a collective consciousness of the world”, concludes the researcher.