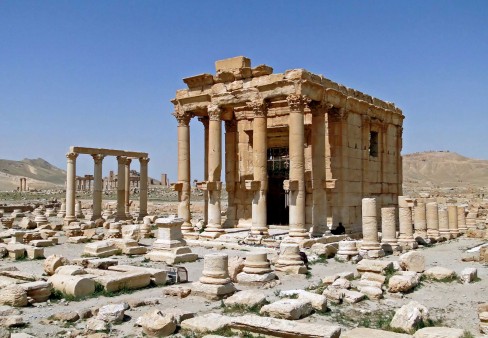 Conference in Thessaloniki on the protection of cultural heritage

The role of UNESCO and the European Union

Do armed non state groups recognize the rules of international law for the protection of cultural heritage? Can they be involved in the preservation of cultural goods? What are the mission and actions of the International Committee of the Blue Shield (ICBS)?

The prevention, restriction and restoration of the losses of cultural heritage and diversity and the challenges faced by of international organizations were examined at an international conference on “The protection of cultural heritage: the role of UNESCO and the European Union and the importance of European Organizations” held in Thessaloniki, at the University of Macedonia by the UNESCO Chair “Intercultural Policy for Active Citizenship and Solidarity”.

Cases of armed groups recognizing rules for the protection of cultural heritage were mentioned by Dr. Kristin Hausler, a researcher at the British Institute of International and Comparative Law, who presented the actions of the non-governmental organization Geneva Call which promotes respect for international humanitarian law by Armed Non-State Actors (ANSAs).

Geneva Call conducted research in Syria, Iraq and Mali with information gathering and interviews with ANSAs operating in the three countries and with organizations protecting cultural heritage on a global and regional level. The findings, said Dr Hausler, showed that members of armed groups want to discuss these issues and wish to learn the rules that are in force, which are ignored even by those who come from regular armed forces.

ICBS’s goal, he said, is to protect cultural and natural heritage from the consequences of conflict and environmental disaster, to promote the ratification, respect and implementation of the 1954 Hague Convention and its two protocols, to raise awareness regarding the importance of protecting heritage in emergencies, to promote and provide relevant training for cultural heritage professionals, the armed forces, other emergency response agencies and those involved in the prevention of the trafficking of looted artefacts.

You cannot blame military forces for destroying cultural goods if you have not trained them before the conflicts, in times of peace, and have not made clear to them the importance of their, the goods, protection, he stressed pointing out that the education of politicians is even more important, since the military acts under their commands.

Greece is the first country in southeastern Europe to establish a Blue Shield National Committee, said Dr. Elena Korka, honorary head of the Ministry of Culture’s Directorate-General for Antiquities and Cultural Heritage.

The coordinator in setting up the National Committee said that the statute has been drawn up and meetings with high-ranking officials of the armed forces have been arranged for the planning of the next actions. The intention of all those involved in this demanding venture, as she pointed out, is to help protect cultural heritage from threats so that cultural goods can be handed over to the next generation in the best possible condition.

The actions undertaken by international and European organizations for preserving the cultural heritage of states, international conventions, legislation and practices were also issues examined by the participants.