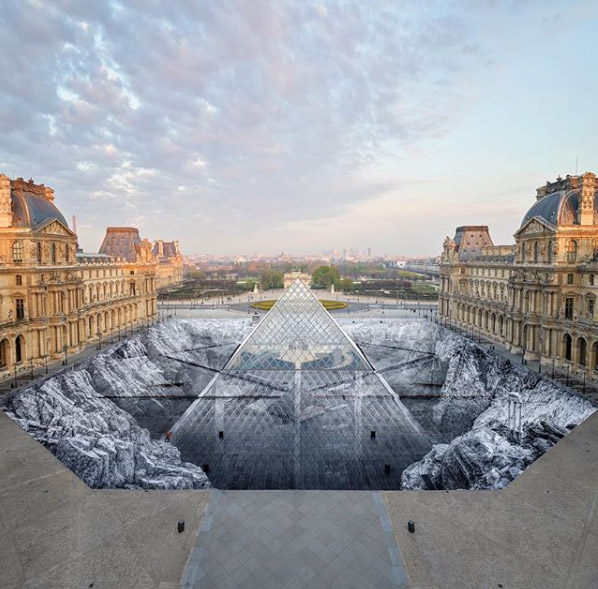 The ‟Secret of the Great Pyramid” was revealed by French artist JR, sticking strips of paper in the courtyard where the Louvre glass pyramid is situated and bringing to light what is underneath it.

The installation by Jean Rene—the artist’s real name—was created to mark the 30th anniversary of the pyramid designed by Chinese American architect I. M. Pei and inaugurated on March 30, 1989. With the help of 400 volunteers, JR created a 17,000 square meter optical illusion in the courtyard: 2,000 strips of paper formed a collage round the Louvre pyramid making it look as if it was rooted in a gaping marble quarry.

On his website, JR explained that his aim was for the installation to last for only one weekend. In fact pieces of paper were torn as visitors trod on the installation, while there were many who cut off pieces to take with them as souvenirs.

“The images, like life, are ephemeral. Once pasted, the art piece lives on its own.  The sun dries the light glue and with every step, people tear pieces of the fragile paper. The process is all about participation of volunteers, visitors, and souvenir catchers. This project is also about presence and absence, about reality and memories, about impermanence”, wrote JR.